Of all the states we have visited this trip, Florida was the one we have spent the most time in thus far. 12 days of Florida wanderings, following the coast down the Gulf of Mexico out to the Florida Keys, then back up the Atlantic coast. It’s been a fun state, but I’m ready to move on. We’re hoping to travel up the coast fairly quickly (at least relative to the amount of time we just spent in Florida), but before we do, here’s some final wrap-up of Florida (aka, things I forgot to post about while we were here — this might be random.)

On our luck with the weather in Florida:
So we’ve actually had fairly good luck with weather this entire trip — it snowed before we got to Lake Tahoe (and while we were there), but not while we were on the road. We got some random rain on the road in various places, but it had never spoiled any of our planned activities.

While we were at Universal Studios yesterday, we had just entered the second park (Islands of Adventures), and we saw a grey cloud in the sky, which reminded me of all our weather luck, so I remarked to Travis about how nice the weather had been for us this entire trip. Of course, the weather did not approve of this, so it decided to drench us with water and throw in some thunder and lightning which caused most of the rides to close down. I know Florida frequently has afternoon thunderstorms, but since we hadn’t encountered any for the first 11 days we were here we weren’t really anticipating any for our very last full day in Florida. It even hailed a little bit, just to show us that the weather is still boss, and we shouldn’t get too used to daily sunshine.

Other than the rain, Universal Studios was pretty fun, although I kept relating all the rides to their Disneyland equivalents (there was a Men In Black alien shooting ride that was like Astro Blasters, and The Mummy roller coaster reminded me of Indiana Jones except with a roller coaster track, etc). Travis even asked one of the attendants what time Splash Mountain would reopen, when referring to whatever their log flume ride was. They seemed confused.

Feral Roosters of Key West (for Leila):
You asked for rooster — here is the rooster that cock-a-doodle-doo’d at me. There were many more who were equally as noisy.

[kml_flashembed movie=”http://lindsaymeares.com/blog/img/rooster.swf” height=”324″ width=”324″ /]
Just don’t click it (if your sound is on), I might have been bitter about my rooster alarm clock…

Here’s him in the parking lot: 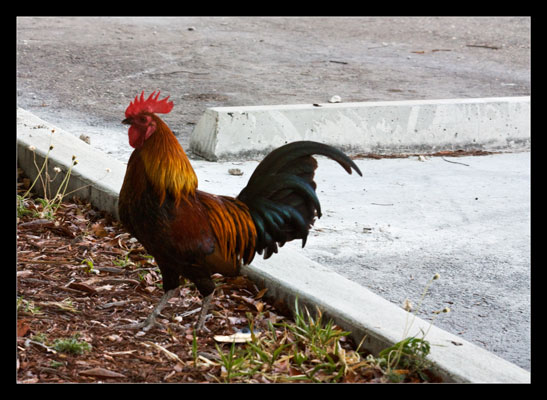 On Living in Florida:
While we were here, we thought about whether or not it would be somewhere we’d want to live. It appeals to Travis, because it is one of the more appealing states with no state income tax (the other appealing states being Washington and Texas). It appeals to me because Travis says we aren’t allowed to move back to California (pfft), and Florida has an adequate Disneyland replacement. Also, the beaches are pretty here.

Pros:
– There are beautiful beaches here, even in Miami the sand was still white and the water clear blue.
– No state income tax
– DisneyWorld

Cons:
– It’s very humid now, and is only going to be more humid over the summer.
– There are a ton of toll roads everywhere, (which we found irritating since we had to carry tons of quarters and dollars constantly because we never knew when we would encounter a toll.
– I’m not really sure this is a con, but they actually have to put minimum speed limits on the freeway signs, which is weird to me. i.e., maximum speed limit 65, minimum speed limit 40. Do people really try to go 35 on the freeway? Ugh. Speed limits are too low here in general. Big open 2 lane roads with no way to get on or off them, and the speed limit will be 45, whereas any other state it’d be 65 at least.
– Something about hurricanes…

Oh! And in Florida we found the “Mears Motor Shuttle” and taxi company, which isn’t nearly as exciting as if they had spelled it right, but previous to that the best I found for my name was a “Lindsey’s Tree Cutting” company in Texas. Someday I’ll find something cool with my name on it spelled correctly (Travis is so lucky with his marina (san francisco), air force base (near sacramento), town + high school (teague, TX), lake (in texas), streets (everywhere, particularly texas) and a barber shop (mississippi)).