Today the Space Shuttle Atlantis launched on mission STS-125, the final service mission to the Hubble Telescope. We found out there was going to be a shuttle launch in May several weeks ago, and made plans to stall our way through Florida so we’d be able to see it (provided it launched on schedule). Despite the many warnings of friends and family that these things never launch early, but can easily be delayed due to weather and other conditions, today’s launch was perfectly on time at 2:01pm EST.

There are several places in Florida to watch the launch. The closest vantage point is the NASA causeway ~7 miles from the launch pad, but they require advance ticket purchase and apparently sell out within minutes so we’ve been too late for that location for months. The second NASA facility is the Kennedy Space Center complex, which although is the second closest, it has no viewpoint of the launchpad so you can’t see the shuttle until it clears the trees.

We decided to go for the third closest option (and the closest free option), which was the city of Titusville which was about 12 or 13 miles away from the launch pad across the Indian River. We got there and found a random free parking space in a park (some people were trying to charge $20 to let you park your car), and we wandered over to the river edge. Once we figured out which of the two launch pads was for today’s launch (versus the back-up shuttle in case this mission needs help), we found a nice rock to sit on and wait for another hour.

We weren’t sure if the mission would go off on time or not — it had been set at a 2:01pm liftoff, but the actual window it could take off from started at 1:52 and lasted for 62 minutes, with random 1-2 minute intervals where it could not take off due to space debris. Luckily, the weather was good (was predicted a 90% chance of launch today) and someone near us had a radio (or TV) so we could actually hear the countdown going right on time. 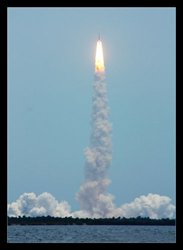 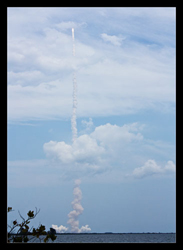 It was fun. I wish we could have gotten closer, but it would have been impossible to do unless we had gotten some of those tickets for the NASA causeway. A night launch would have been cool also. Oh, and I need a bigger zoom lens.