Today we visited Detroit, Michigan, which Travis calls an “urban wasteland” because of all the abandoned boarded up buildings and trashy empty overgrown grass lots.

Travis decided his car felt like a minority (being a Honda in a world of Fords and American-made cars), so he was afraid to leave it alone anywhere (plus we weren’t sure about walking around there anyway). So, instead of parking like we do in most cities, we instead did a quick drive through of Detroit while I tried to discreetly take pictures out the car window. They turned out quite poorly, with the highlights being things such as “gardener bending over lost-cause lawn”, “one-way street to hell” and “where’d the other half of the storefront go?”

Giving them fancy names does nothing to help how horrible they are, so I’ll just leave you with my awesome titles and you can’t see the pictures. Sound fair? I think so.

Other than that, ever since we hit Vermont we’ve been hitting up random factory tours along our route. We went to Ben & Jerry’s in Waterbury, VT, Magic Hat Brewery in Burlington, VT, Samuel Adams Brewery in Boston, and the Cape Cod Potato Chip Factory in Cape Cod. After seeing the production of ice cream, beer and chips, we’ve been wondering what the next factory experience would be. Turns out it’s trucks.

Today we went to the Ford Rouge Factory Tour in Dearbourn, Michigan. Unlike our previous factory tours they did not provide free samples at the end (aw, shucks), but it was still a fun and interesting experience overall.

They had a Henry Ford history video and then a more artistic video showcasing the production process (complete with “multisensory” special effects consisting of a lot of rumbling and warm blasts of air, as well as the obligatory spritz of water.) A lot of places seem to have these 3D/special effects shows, and they always seem to spray you with water.

After that we walked through the production plant where they were making Ford F-150s. There were a lot of signs that said “no photography”, but I decided this meant “take pictures discreetly and don’t get caught.” It was pretty cool to walk above all the different assembly stations, like the windshield attaching machine, people building the doors, installing the center console, etc. 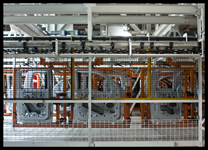 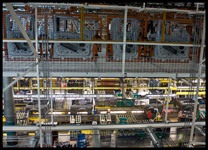 After the tour we hopped back into the car and started our journey to Chicago, Illinois. The first town outside of Dearbourn was called Ypsilanti, which amused me at the time and caused me to spend the next 30 minutes on Travis’ smartphone trying to remember the name of the ridiculous vowelless road in California (I figured it out, it’s Zzyzx.)

Thanks all for now! -Lnz