Travis’ friend Bryan met up with us and after doing nothing for most of the morning, we decided to hit up the nickel arcade. Of course, most of the games cost 5 or 10 nickels, but I don’t really like the shooting arcade games anyway, so I played mostly the random games where you get tickets.

I found a fun 10 cent game called Buzzy Buzzy where you use a little net to scoop bumblebee striped balls into a little jar of honey. It was surprisingly amusing for the 10 cents it cost, so we spent a couple dollars trying to see who could get the highest score.

Travis and Bryan’s high score was 22, but mine was only 19 🙁 I got 300 tickets though, so we got a hackie sack so the boys could go be silly in the parking lot, and I got a pink cat.

We decided the pink cat would have to be one of those things where I take pictures of it along my travels, so I decided to start in the parking lot of the arcade in front of some random person’s car, who happened to have a cow hanging off the bottom off their car. 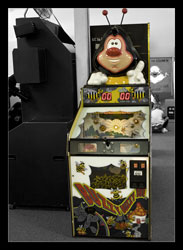 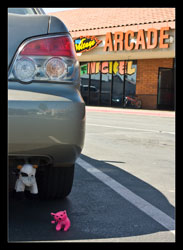 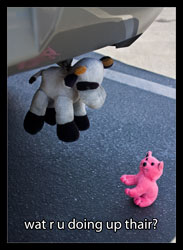 Yea, I don’t know either.