We decided we’d keep looking for a cooler miniature golf course, so we started heading back to the car when we encountered a fountain with some metal statues of children and BABY DUCKS! There were 2 little ducks cheeping and swimming around to the opposite side of wherever I stood, so I decided to run to the car and get my super zoom lens so I could take pictures of duck fluff. BUT — as I was halfway to the car, I found two momma ducks in the sidewalk, with 7 baby ducks! I was so excited.

I retrieved my lens and went looking for the sidewalk ducks, but they had disappeared, so I went back to the fountain to find the 2 baby fluffs. I took many pictures. I later found the rest of the baby ducks over in the water with all the parent ducks and some fish with scarily large mouths. I hope they don’t accidentally swallow the baby ducks! 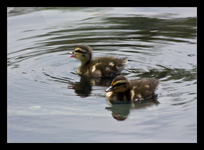 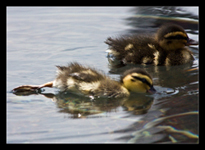 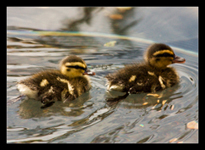 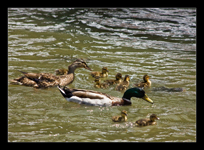 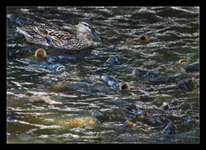 After that we went to Professor Hacker’s Lost Treasure Golf, where a small mine train took us up to the top of the course and we played the Diamond course (as opposed to the Gold course). We started out fairly well, with me taking an early lead with some skillful putts and a couple hole-in-ones, but Travis started gaining on me around the halfway point, and a few blunders caused me to lose my lead (and I never recovered). In the end, Travis won by 3 strokes, so he bought me a strawberry popsicle. I started out so good, but I guess I just don’t have the endurance to maintain my awesome miniature golf skills through all 18 holes. Yea…