So, Lake Tahoe, is awesome. I’m sure it’s primarily because it’s very nice to get a hotel room with a giant jacuzzi tub for only ~$33 per night, which is cheaper than what we were paying for rent in CA (which is the point of our trip). I enjoyed sleeping on a real bed so much, and I’m excited I have another 2 nights here before we head out to Death Valley.

Today we didn’t really do anything super exciting. We’re staying at one of the casinos here, but I’m not a big gambler, so I won about $10 by better on black twice in roulette, then lost some change pushing buttons on the slot machines, and then I gave up. We had much more fun by getting a card for the arcade at the casino across the street where we found our beloved Buzzy Buzzy game we found at the nickel arcade in Bakersfield. Although it costs a whole 20 cents in Tahoe rather than the 10 cents in Bakersfield, it was fun to play again. My best score in Bakersfield was 19 little bee balls into the honey jar (Travis’ and Bryan’s bests were 22), but in Tahoe I got 37 (Travis’ best here was ~32). We found the balls in this machine were easier to scoop up, but less easy to hit in accidentally. You’ll have to play to see what I’m talking about.

Anyway, other than that, we had some Lake Tahoe photo ops for my camera obsession. I tried to take pictures of snowflakes while it was snowing earlier, but they kept melting. Hoping for snow tomorrow so I can try again. But, since we failed at snowflakes, we wandered to the lake to chase geese and take pictures of mountains.

I haven’t had time to piece together any of the pictures I took today while lazying around Lake Tahoe, such as the scary pretzel eating geese or the sunset attempts of the mountains, so I’ll just post some leftover stuff from our Napa/San Francisco/Berkeley journey, plus my recent obsession with photographing birds.

I’m not sure what it is about the birds… I thinks it’s just that they move so fast it’s just really hard to get decent pictures so I get really excited when I do. 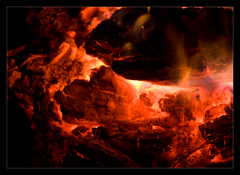 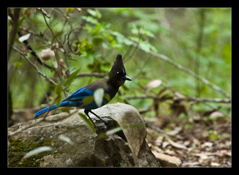 San Francisco and Berkeley — I didn’t like any shots I got of the Golden Gate Bridge, because the weather was fairly poor, but Travis said I wasn’t allowed to not post one. 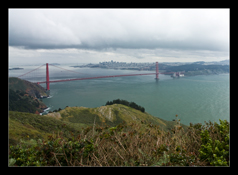 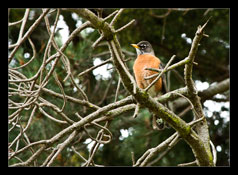 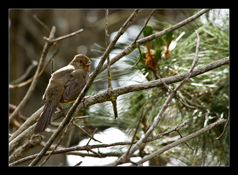 Driving to Lake Tahoe — before the crazy cold and snow and ice, the rain let up and we saw a weak rainbow off in the distance. I took pictures, but they were all kinda sad. But then — about an hour later as we were passing Sacramento, I saw this beautiful rainbow that was on both sides of the highway (and double rainbow on one side). We only pulled over for a second so I could try to take pictures, so most of my pictures were out of the car window. The photo with the large tree was one I really liked, but was somewhat poor because of shooting out of the car window, so I did some extensive playing in photoshop to make it look cool, although it doesn’t necessarily look real anymore.

So ya, that’s all for now ~ Travy and I are gonna go play more Buzzy Buzzy; he needs to beat my new high score, plus I need about 300 more tickets to get this awesome pink cow stuffed animal. Tahoe pictures to come tomorrow hopefully!