Most of the places we’ve visited on our road trip are places neither one of us have been before, but every once in awhile we revisit a place to reminisce. I got to visit my old home of 8 years in Massachusetts, and we had fun tracking down my dad’s old house in Mississippi, but yesterday was Travis’ turn to revisit old places. 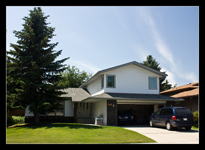 Yesterday we went on a drive through the section of Calgary where he lived for a year and a half when he was 9. We drove by his elementary school, which apparently looks the same (except for an updated playground), and then we drove by his old house. I took a picture of the house that he was almost certain he lived in. I took pictures of a couple other similar houses as well, just in case. I’d say there’s a 70% chance we took pictures of the right house, a 25% chance it was the house 3 doors down and 5% chance he was entirely wrong. 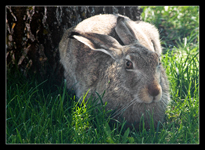 His remarks on the neighborhood in general: “the trees are taller.” He was also sad to discover that his 7-11 had been turned into a medical clinic and his childhood baseball diamond had disappeared. Oh woe. I did find a rather large, perturbed looking rabbit sitting under a tree near where the baseball field was supposed to be. I took pictures of it until it got angry and galloped away across the field. Scary bunny… 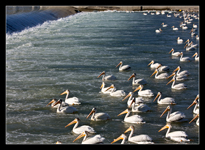 After touring his old neighborhood we drove to a park at the Bow River to look at birds. There is a weir on the Bow River which was built in 1904 to divert water for agriculture, but apparently creates a ‘drowning machine’ which prevents passage up or down stream. It looks like a small waterfall, but is apparently quite dangerous. When we got to the weir, there were 4 emergency vehicles there, so we’ve been trying to figure out if someone fell in the water there yesterday, but no luck. But anyway, since the weir is too powerful to allow passage up or down stream, there are often fish stuck in the area trying to make passage — and of course, since there are a bunch of lost fish, there is a large congregation of pelicans waiting for the poor fish.

The pelicans sit there watching the weir, all day, and just wait for fish. When they spot a fish small fights break out and they all try to scoop it up for lunch. I got a picture where I swear one bird is trying to eat another bird’s neck to prevent him from swallowing the fish. Anyway, eventually a victor emerges and then they all go back to staring at the weir. It was fun to watch. After that we went to go watch the sunset over Calgary while taking pictures of the city and airplanes. Fun day. 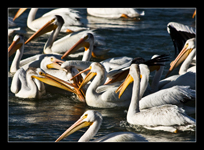 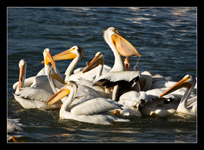 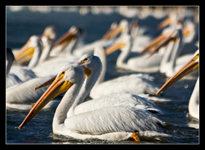 One thought on “Calgary reminisce and pelicans.”