We’re getting to a point where everywhere we go, things seem to always be the same. Toronto was nice, but it was just another city. Lots of places to walk to and eat, random museums, that iconic tall building you have to pay to go up, etc. We decided to actually go up the tall building in Toronto, the CN Tower, which *was* the tallest freestanding structure in the world until it was passed by the Burj Dubai a year or two ago (an under construction skyscraper in Dubai.) It was neat to go up and look out over Toronto, although the problem with being in the tower was that it doesn’t really lend itself to taking pictures of the skyline that include the tower. They had a cool glass floor though, which I thought was awesome. Travis thought it was a little scary. 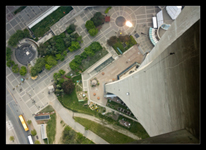 I wasn’t satisfied with daytime only pictures though, because I could clearly see from our hotel window that the CN Tower had some nice decorative lights, so I took pictures of those also. 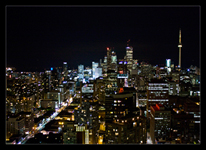 One thought on “CN Tower + Toronto”