I feel like I’m falling behind on blogging because I haven’t been able to post yesterday’s wanderings until today, which means I probably won’t do today’s until tomorrow. *sigh*

We started our day yesterday by trying one of the restaurants mentioned in our guidebook, a brunch place called Gravy. Our book describes it as a “hip joint serving up huge portions of breakfast and brunch. Expect to wait on weekends.” We did not have to wait long but the portions were indeed huge. Travis ordered biscuits and gravy with a side of sausage and bacon (he figured he had to try the gravy at the place called gravy), and I got their “Bacato” omelette (bacon, tomato and cream cheese) with hash browns. Everything was massive. The omelette with cream cheese instead of real cheese was a little weird since the omelette was so huge and the egg was minimal, it was basically like eating cream cheese coated bacon bits mixed with hash browns. It was okay, just really rich and waaay too much quantity-wise. Travis’ biscuits were like little mountains on the plate covered in thick sausagey gravy. Too much sausage for me. I think I ate maybe half the omelette and Travis did about the same damage to his biscuits, although he finished his meat, of course. 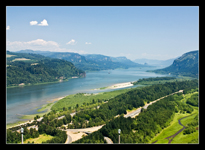 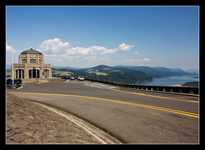 After breakfast we lazily started our tour of the Columbia River Gorge (we were too full to move). We started off by driving down the Historic Columbia River Highway and stopped at several lookout points (Portland Women’s Forum State Scenic Viewpoint and the Vista House), which overlooked the Columbia River Gorge. We quickly moved onto the waterfalls. The first waterfall we pulled over for was called Wahkeenah Falls, which was 1/4 mile away from the Multnomah Falls. Multnomah Falls is the 604ft tall waterfall which is the most famous of the gorge’s waterfalls, so we knew we had to stop there inevitably, but I think we both enjoyed visiting the Wahkeenah Falls more. 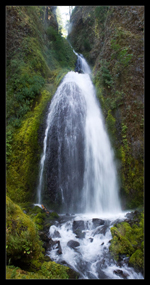 It was over 100 degrees outside, so we were trying to view as many sights as possible with minimal walking (extreme heat and food coma = very lazy wanderings). You could *almost* see the main part the Wahkeenah Falls from the road, but you had to walk about .2 miles to stand next to it. We decided we’d brave the uphill journey, and good thing we did. Once we got to the top suddenly the temperature seemed to drop and a cool mist spray from the waterfall hit us. We were the only ones up there at the time, so we enjoyed sitting in the crowdfree mist and took pictures of the falls. I didn’t have my ultra wide lens with me, so I tested out taking some pictures I could stitch together in a vertical panorama.

After Wahkeenah Falls we headed to the famouse Multnomah Falls, which was overly crowded with people. It was so crowded there was actually a gathering of photographers all hovering in this one cover (the only one with tree shade) to take pictures of the falls without as much sun glare. Actually it was really just me and one other woman waiting for this photo happy man to stop taking pictures of every possible thing from the one shady corner of the viewing area. We then walked up to the bridge and had fun weaving through the ridiculous madness of people trying to take family portraits with the waterfall in the background. Took a few pictures at the viewing area above the bridge, then headed back down. We dipped our feet in the stream at the bottom of the falls and I contemplated getting a sno-cone, but we decided to move onwards. 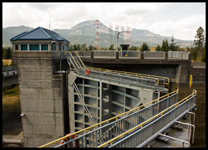 After seeing the crowds at Multnomah Falls we had this image of small children wading in every other water feature the guide book mentioned, so We skipped the next few points of interests. Our next stop was the Bonneville Lock and Dam, which is the grown-up version of the locks we went to in the Seattle area. We got to see a boat lock through — it looked like a small toy boat compared to the size of the lock. I think the locks in Seattle could fit maybe 8 of that size boat, whereas these locks can hold five-barge tows. 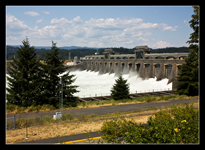 We took some pictures of the dam, and then visited one of the powerhouse facilities until they kicked us out. Then we went to go look at the fish ladder and take pictures of salmon and weird eel things that occasionally latched themselves to the window so they wouldn’t get sucked backwards. As we were leaving the facility we decided to check and see if there was anything new in the locks, because they would have finished with the toy boat by now. Sure enough, there was a giant barge pulling into the locks — Travis asked them what they were transporting, and they said they were an empty 2 million gallon oil vessel returning to Vancouver. We decided we wanted to stay until the boat locked through, because they’d have to swing out the car bridge in order to let the barge onto the river and it sounded fun to watch. 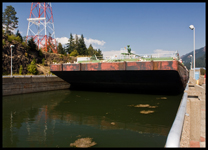 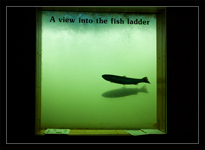 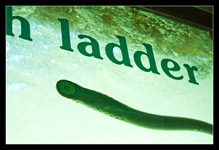 After that we decided to head back to Portland, OR. We got the oil changed in the car and then went out to dinner. Travis wanted to try a brewery since our Oregon guidebook has a pub themed chapter, a brewery themed chapter and a winery themed chapter. We parked near the Powell’s Books in Portland, OR (arguably the largest independent new and used bookstore in the world) and found a random brewery restaurant. It turned out to be the same brand of beer we had tried at my uncle’s house 2 days prior (he had mentioned it was from Oregon).

After dinner, we went to Powell’s Books. It was a really cool bookstore, since it’s both used and new books, and it’s really massive so they have a lot of stuff you might not find in your average bookstore. For example, I was looking through the puzzle/sudoku section and I came across a Dodgers themed crossword puzzle book, and when I pulled it out to look at it there was a Dallas Cowboys themed puzzle book behind it. I ended up getting a Japanese number puzzle book and an origami book full of different ways to fold sonobe modules for those origami balls I’m obsessed with. I was sad to discover I had not brought my origami paper in the car (although it was probably good considering I didn’t care about its absense for the first 3.5 months of the trip). I’ll just have to buy some origami paper once I’m back home.