So now that I’m in Arizona, I finally have internet to post Death Valley pictures (and Las Vegas or Utah maybe later). Vegas charged for internet (per laptop), so we put it on Travis’ laptop, so I didn’t bother to update blog much because it’s a hassle to transfer everything over to his laptop.

So anyway, here goes on the Death Valley pictures: 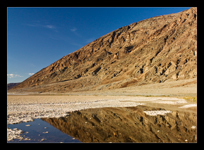 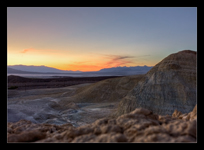 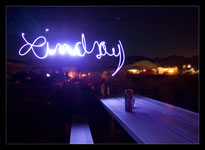 The first 2 images and the panorama are pictures on the drive in from a high vantage point. Picture #3 is Badwater, which is the lowest point in North America (282ft below sea level). Picture #4 is a sunset from our campsite. I have a lot of other pictures from the day in general — it’s just it’s a lot of different important rocks. #5 was some light painting fun at the campsite. My skills at writing my name backwards in cursive are much stronger than Travis.

Overall, I wish we could have spent more time at (or gone at a different time of day) was the sand dunes there. They were pretty cool, but the sun was directly overhead so the light wasn’t great for cool sand dune pictures. Generally, it was hot (although probably only mid-eighties at the hottest), dry, and at night it was super windy (it kept ruffling the tent at night and it was hard to sleep). It was fun though 🙂