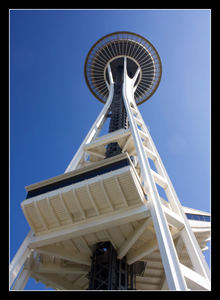 Pre-road trip as we were packing up, Seattle was the place Travis decided we were inevitably moving, even though he hadn’t been there in years — now, finally, nearly 3 months into our road trip we have finally made it to his supposed future home.

So far Seattle is living up to his expectations — it’s greener than California, the city itself is nice, there’s no state income tax and we’re here in the summer so we don’t get to see how gloomy it is when it rains constantly. So far his only qualms were that there was no Pei-Wei anywhere nearby, and no On the Border; however, we had some delicious Chinese food when we got here Friday, so maybe there’s hope for a good hole in the wall Mexican restaurant somewhere too.

Today my aunt and uncle took us on a driving tour of Seattle, and I had lunch with my 2 cousins I haven’t seen in over 10 years. We went by Safeco Field and Quest Field (Seattle Mariners and Seahawks), which was pretty traffic-y since a Rock’n’Roll Seattle Marathon had the finish line at one of the stadiums. We drove by the waterfront, the downtown area, the Space Needle, Fremont, and a whole bunch of other places. It was nice to drive around and see Seattle because the last time I was here I think I was 8 years old, so I don’t remember anything other than being on a ferry looking at the Space Needle, catching and throwing back crabs on my uncle’s boat, and a vague memory of bowl of crab salad I didn’t want to touch. I have since learned to love crab.

We stopped at the Ballard Locks, which is a system to raise/lower boats in and out of Lake Washington and the Puget Sound, as well as keep the sea water and freshwater in the appropriate body of water. We got there as they were about to raise up some boats in the locks, and then we went and looked at the fish ladders (for the migrating salmon). I didn’t see any fish jumping up the ladders outside, but they had an underground viewing area and there were definitely fish in there. Makes me want to eat salmon sushi. 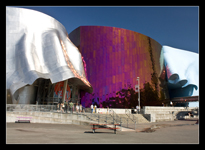 After that we went to the EMP building, the Experience Music Project + Science Fiction Museum building, which looks like a colorful crazy version of the Walt Disney Concert Hall in LA. It was cool looking, but it was also very good at reflecting the sun into my eyes. I took a picture of the nearby Space Needle its reflection. We were going to go up the Space Needle, but the line to get tickets was 25 minutes long (Saturday afternoon), so we decided to save that for later. 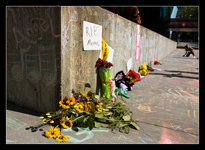 Other than that… The Experience Music Project and Science Fiction Museum might be fun to wander through (particularly the Sci-fi part). We did walk inside the music part, but primarily because they have a sequined jacket and glove of a particularly famous recently deceased singer they had moved into the museum lobby. I might like to go back there tomorrow or Monday to go to the actual museum. I’d also like to find a place to view and take pictures of the city skyline (rather than standing underneath the space needle).

Seattle is fun so far though.

One thought on “Finally in Seattle”