After spending so much time in Florida, we’ve decided to pick up the pace as we travel north, which means we’re only following the coast and ignoring anything which requires going inland. Although this is good for moving quickly, it means we’re spending a lot of time in the car, and we don’t really get to see very much of the areas we’re driving through.

Our first stop out of Florida was Savannah, Georgia, which was the first capital of Georgia back in the days of those 13 colonies and such. It’s nice to see all the colonial style buildings again, since I haven’t really been back to the east coast too many times since I moved out of Massachusetts 11 years ago (also very much looking forward to visited where I used to live in MA, but that won’t be for a few weeks).

Savannah was very pretty, in a quaint, old kind-of way. We wandered some of the “haunted” areas that the tour book mentioned, like Wright Square and Bonaventure Cemetery, and then we parked on the Savannah River and walked around the town center for awhile. While we were wandering the shops near the river, we were again drawn in by yet another chocolate shop, but this one had a taffy pull and they were making taffy while we were there! I had to buy some, and it was all delicious. I got a chocolate flavored one for Travis, but he said it tasted like a lame toostie roll so I decided he didn’t get any more. 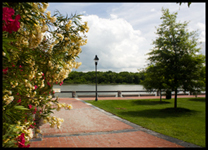 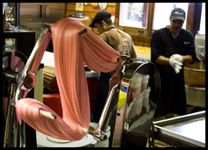 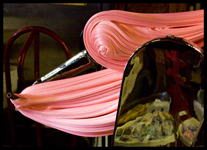 After our wanderings of Savannah, we drove onwards to Charleston, South Carolina. We were originally thinking about staying the night in Charleston, but it’s not too far from Savannah and we wanted to get a bit further up the coast, so we stopped in Charleston to walk around the downtown, and then headed onwards to Myrtle Beach.

Charleston was also very nice — colonial style houses lining the water (except with palm trees!) and various historical buildings. We stopped inside the Old Exchange & Provost Dungeon (mostly because we wanted to see if they had a restroom), and a man in a colonial uniform and tricorn hat found us and started explaining the historical significance of the building. Travis thought it was amusing that the man was wearing historical attire but was wearing sunglasses (indoors) and I found it amusing that when the man pulled his cell phone out of his pocket to check the time.

We continued our wanderings, which included an encounter with a giant pineapple fountain and a mission to find out where a really good smell was coming from (it smelled like buffalo chicken wings, and we never figured out where it came from). I also found a red bird, which is the only color of bird Travis will let me take pictures of these days. 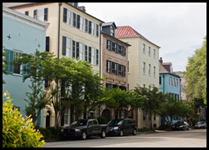 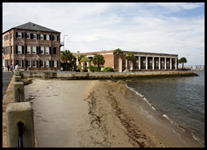 And here are some pretty houses of varying styles I liked in Savannah and Charleston. 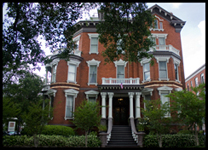 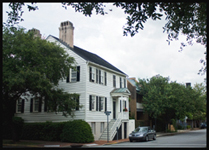 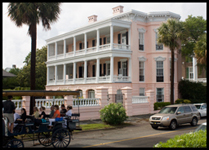 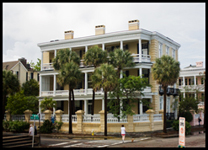 And I found home!! Haha… 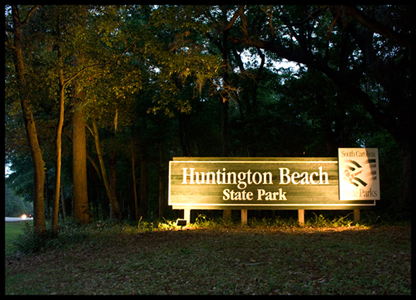