Today we set out to complete my list of “foods we need to eat while in Lousiana,” knocking the final entry (Banana’s foster) off the list. We went to Brennan’s Restaurant in New Orleans around 10:00am (which is the source of the banana’s foster), and ordered coffee and dessert, for breakfast.

Travis got some chocolate pecan pie with ice cream, and I ordered the banana’s foster (which was highly recommended by my dad). It was basically one banana quartered, then sauteed in a pan with a giant mound of brown sugar, butter and banana liqueur. Then, once the banana was thoroughly coated in the caramelized sugar, they flambeed it with rum, and put it on ice cream. It was delicious.

After breakfast, we bought some mardi gras beads for fun (Dallas Cowboys theme for Travis, and one with monkey and bananas for me since I was in a bananas mood). Then we left for swamp tours and Biloxi, Mississippi.

We wandered aimlessly for a little bit, but eventually found the swamp tour that we were looking for. When we got there, we found a large flock of children with matching shirts, which brought back memories of the aquarium yesterday and almost made us want to leave, but they were on the way out so it was okay. We signed up for a tour, which was a 2 hour~ish boat ride up and down the river to look for alligators, turtles, snakes, birds and other wildlife. Luckily, we saw all the animals we were looking for (namely alligators). 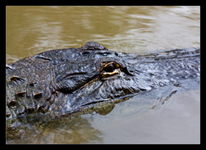 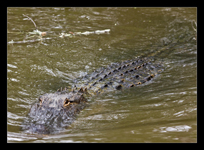 We found a gator right after we started the tour, and the guide lured it to the boat with a package of hot dogs. We did our best to take pictures of the gator, but the boat sides made it difficult since I kept getting the poles in the pictures (I didn’t anticipate how high it would jump). Travis actually took the best action picture of the alligator. He’s been playing around with my camera, particularly when taking pictures of animals: 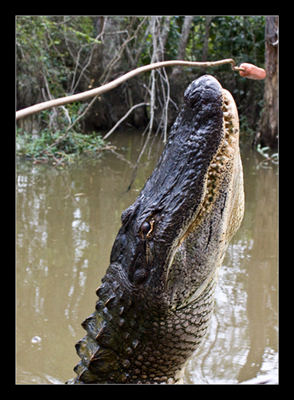 
After that, we continued down the river, saw some turtles and snakes, and a whole bunch of riverside houses that were somewhat dilapidated from Hurricane Katrina. There was actually a guy in one of the less destroyed looking houses who had a DirecTV dish on top of his place and Travis pondered out loud whether or not DirecTV did free installation in the middle of nowhere. Our tour guild pulled the boat over to ask–it turns out DirecTV does in fact install dishes for free in the middle of nowhere (but the bill still isn’t free ;;). 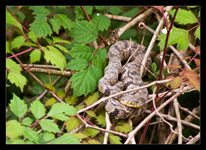 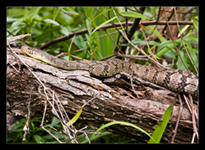 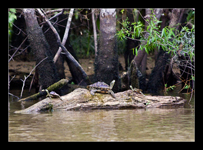 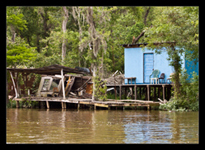 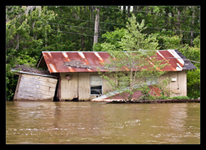 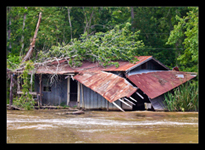 Was a fun tour, I am definitely happy we spent a few days in Louisiana; too bad we’re not there anymore! Today we got to Biloxi, Mississippi, and tomorrow we will travel around here a bit to find where my dad used to live, and something Travis wanted to do (can’t remember…) and then we’ll head to Florida. We were planning to camp at the Gulf Islands National Seashore tomorrow, so we’ll see how that goes. Right now I’ll enjoy my super soft bed at the IP Casino Resort & Spa, since they upgraded us to a suite for no particular reason so this is probably the nicest room we’ve had this entire trip.