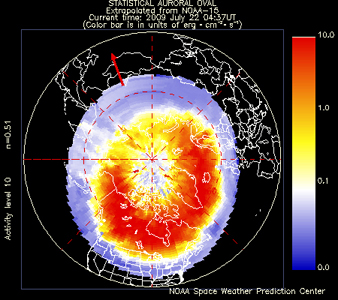 When I first found out we were going to northern Canada one of my main desires was to see some auroras. My sister linked me to an Aurora Watch website which shows updated views of aurora activity. I watched this website religiously when we were headed up to Prince Rupert, since that was the farthest north we were going and my most likely chance to see auroras. Unfortunately, it was foggy and overcast for all the days I was in Prince Rupert and then I flew home to Orange County.

The problem with auroras is that not only do you need the sky to be clear, fairly dark (little to no moon), and have reasonable auroral activity over where you happen to be. There’s also certain months where auroras are more common (not July). I had mostly given up with the prospect of seeing northern lights until I looked at the aurora watch website tonight and it showed a big ol’ level 10/10 activity and looked like it *almost* touched where we are in Banff. I then spent the next hour refreshing the aurora page to see if it would move more over Banff and looking out the window to see if anything green appeared in the sky.

Eventually Travis decided we could go for a drive out of the town (to get away from the lights) and to see if we could get a better view of north, since there’s a large mountain directly north of our hotel. We took a drive about 20 miles NW from the hotel and then pulled over at a truck stop to survey the sky. Sure enough, there was a giant faint green-hued circle arcing across the sky. We couldn’t see much definition in the faint light but my camera decided to take some nice shots. I think we are a little too far south to see much aurora action, but it was still neat to go out and actually find something worth taking pictures of. 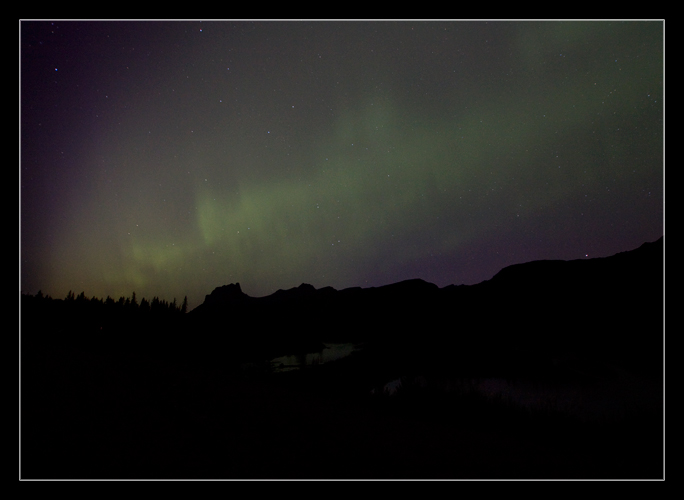