As soon as we passed into Québec (the province), it suddenly felt like we had driven into a foreign country. Niagara Falls and Toronto seemed a lot like the US; sure, there were a few more people speaking French than usual, but there was nothing hugely different. Québec on the other hand, does not legally require any signs to have English on them, so suddenly everything was in French. Also, it didn’t help that Travis decided to go to New York to get gas, and we got stopped and searched by customs on our way back into Canada. It’s fun to get asked the same questions from 3 different people about where we’re from, where we’re going, and what we generally do with our lives when we are not aimlessly roaming the country. They poked through the car a little bit, but decided we were pretty harmless.

I’m not exactly sure why they stopped us, but I guess we could have looked suspicious. Maybe because we had stopped across the border for about 30 minutes only, so they though we had picked up something big or illegal (I’m not sure if their computers tell them when we were last in the country); or perhaps it was because we have so much stuff in the car and they were concerned we were trying to move to Canada. Or maybe they saw my stuffed animal collection and decided we were crazy. Or perhaps Travis’ mustache was particularly suspicious looking. Either way, it was a good waste of time and entirely not worth it to stop in New York for gas, because the few dollars that were saved on the price of gas were spent on the $3 tolls to enter and leave the US, as well as the time wasted at customs.

After the hold-up at customs we had dinner (where the menu was all in French) and then went to go check in at our hotel, but the reservation had gotten messed up (through hotels.com) so we had to call them up to get a refund and then book a new room, and then finally settled in from our 6 hour drive + customs hold-up + hotel fiasco.

Today we decided to take a walk through Montréal, which was very nice. French stuff everywhere (luckily everyone speaks English too). I remember enough high school French to read signs and menus, and if we were to encounter someone who didn’t speak English I could probably get my point across. Also just seeing everything in French and hearing it everywhere, things are starting to come back. I decided I needed a more thorough refresher course on French so I got a copy of Harry Potter et le Prisonnier d’Azkaban from a used bookstore near the hotel. ^.^ That’ll be fun.

Other than that… while we were wandering today we encountered a random outdoor performance that was part of a week long festival of some sort. There was a free outdoor show that involved a man dancing with a backhoe to opera-type music. I’m guessing some sort of man/machine love/hate relationship thing. I tried to look up who/what it was on the internet, found out it was called Transports Exceptionnels (can see videos on their site).

Also, I guess Québec is the world’s largest producer of maple syrup, so now I’m wondering whether I should get some here (I’m sure I will), or Vermont, or both (to taste test). We were going to get some maple flavored beverages earlier today, but I have this issue where I get bored and leave places when lines are long or slow (it was slow). I’ll have more chances to get maple syrup later.

Most of the pictures I took in Montréal today were pictures of all the old architecture. There were some very pretty cathedrals there too. 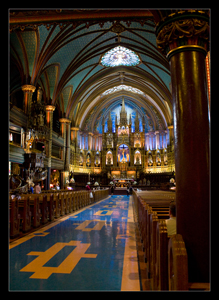 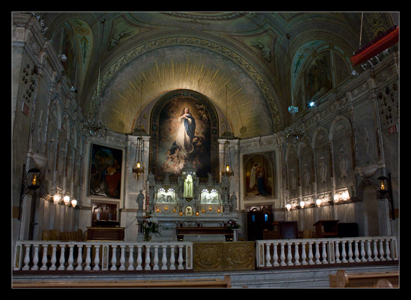 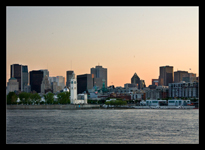 Edit: Changed the top picture, moved the sunset picture down to the bottom with a panorama I took in the morning as we were leaving.