The Florida Key are gorgeous. I didn’t know water this blue actually existed (I thought it was only in postcards and such). Today we went to Bahia Honda State Park in the Florida Keys in search of a camp site (they were all full), so instead we spent the afternoon lounging around the on the beach and working on my tan and Travis’ sunburn. The water was really nice — very warm, and super clear. It was pretty shallow too, so you could walk in pretty far with the water still only at your knees.

I think the best part was when we were both taking a dip in the middle of the afternoon, and we heard a giant splash behind us. We turned around, and there was a giant bird–it looked like a hawk or something (but it was an osprey) and it had splashed down onto the water. I was wondering what it was doing — was it going to float around like a duck or something? But just as quickly as it landed, it suddenly took off again with a giant 12+ inch fish in it’s talons. It was really neat to watch — I wish I had my camera, but seriously, how could I possibly predict something like that to happen.

Here are some other pictures from today — the marina in Bahia Honda State Park and an island off the coast, an egret friend, an iguana (or lizard), and some deer. It figures that the first time we actually see a deer (considering all the “deer crossing” warnings we’ve seen) is actually a baby deer that seems to meander around the tourist center in for Key West, probably because it gets fed or something. It was a cute deer though. 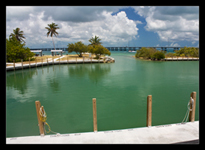 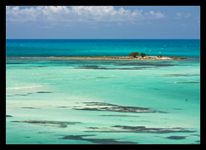 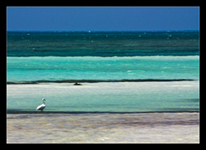 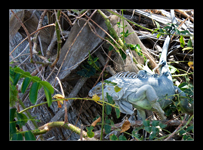 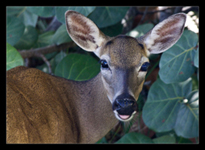 Other than that, it was a lot of fun here — nice weather, not too humid, gorgeous beaches. Tomorrow we’re doing some sort of snorkel/jet ski/para sail/water fun adventure and a sunset sail. I’m excited.

One thought on “Key West!”