We were in New York City on Sunday, and now today (Wednesday) we’re in Minneapolis, Minnesota. That’s 1205 miles on the shortest route on Google maps, which is 19 hours and 29 minutes of driving. This doesn’t include our sidetrack to Detroit, the stop at the Ford factory, or our 4 hour detour for pizza in Chicago. Plus there was ridiculous traffic and road construction everywhere in and around Chicago. I feel like I live in the car.

I think we’re at the point where we’re ready to be home. I think we actually hit this point in Maine, when we finally remembered and appreciated being in one place for seven days, not having to worry about where we’re going to sleep tonight and how far we have to drive to the next destination. Our original plan from New York City to Minneapolis involved stops in Pittsburgh, Cleveland, Detroit, Chicago (2 days), Milwaukee, Madison and then Minneapolis. Our actual route was Cleveland, Detroit, Chicago, Minneapolis.

At this point, I’m so worn out and sick of the car I don’t want to touch it again until I absolutely have to, since I know the next time we get in it we’ll probably drive most of the way to Mount Rushmore, which is 506 miles away (~9 hour drive). Our reward for getting ourselves from NYC to Minnesota in 4 days is to stay here for 3 days, doing absolutely nothing and going to the Mall of America everyday.

Other than hating the car, we spent a lot of time hating traffic, road construction and Chicago. I personally didn’t have issues with Chicago, but I also didn’t drive at all in Illinois (spent all the time napping or organizing photos and updating resume stuff). Travis actually declared Chicago to be worse than Miami. There was a lot of traffic everywhere and horrible roads. We also tend to hate on the states that get a little crazy with the toll roads. Plus, it didn’t help when I ran into a street lamp last night and we had to wander around looking for butterfly band aids and cleaning solution.

The street lamp story: we were in a random town of Illinois and looking for one of those hotel coupon books that we usually get at visitor’s centers or gas stations. We GPS’d where a visitor’s center might be, but Travis makes an early turn so had to circle the block (one way streets) to pass the place, so instead I decided to hop out and run over there to see if they’re open. I grab my umbrella and I start bouncing down the street with the umbrella blocking my view. And then *bam* — I run into a street lamp with my face (and my umbrella), and the umbrella cut me right above my eyebrow. I wasn’t in pain or anything (or maybe I was just shocked I was so stupid), so I leaned down to pick up my glasses and I noticed something else drop on the ground. It turned out to be blood. I ran back to the car and got to hold a roll of toilet paper against my forehead until we found something better to stop the bleeding. It was good times. It reminds me of the time I thought it’d be a brilliant idea to run and jump on a wheelbarrow and it tipped over and I broke my arm. I’m still afraid of wheelbarrows. I wonder if I’ll fear streetlamps now too. 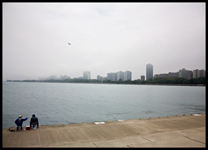 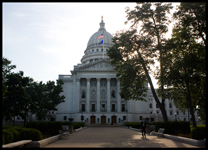 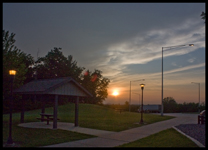 Anyway, so today was a super long day. We left the hotel at noon and went on a mission for pictures of Chicago skyline and deep dish pizza. We routed the GPS to a park on the water, and it took us an hour to get there (traffic, construction, tolls, etc), and when we did we couldn’t even see the city because it was too foggy. We then went and found some deep dish pizza, which was delicious, but probably not necessary since by the time we finished lunch it was 3pm.

At this point we made the decision to go to Minneapolis instead of Milwaukee, which pretty much meant we’d be driving for the next 7 hours. We didn’t stop too much — just at the visitor’s center as we entered Wisconsin (to make me drive), Madison for the capitol, a random visitor’s center which claimed it had a “scenic overlook”, and a random middle of no where place in Wisconsin to take pictures of lightning. We didn’t get to the hotel until almost midnight. 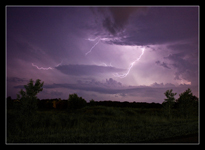