Today we decided to hit up a few more places that Travis remembered (or thought he did) from the last time he was in Banff. The first place we stopped was Lake Louise, which had the turquoise waters of yesterday’s Lake Minnewonka, but the mountains in the background had glaciers on them! We again looked into the prices for renting a kayak — Travis guessed (in jest) that it would be $50/hour, whereas I said it would be $40/half hour. Turns out we were both right — it costs $40 for 30 minutes but if you rent for an hour it’s only $50. We walked around the lake a short while then decided to move on.

We next visited Moraine Lake. Travis thought he hadn’t been to Moraine Lake (he only remembered Lake Louise), but later found out otherwise. Moraine Lake is in the “Valley of Ten Peaks”, which refers to the 10 giant mountain peaks rimming the lake. It used to be featured on the Canadian $20 bill, which was what made Travis realize he had been there before. We took a nice walk around the lake to the dead end of the trail, then wandered back. Travis showed off his kayak cost guessing skills by accurately deciding that Moraine Lake would be $10 cheaper hourly and have no listed half hour rate — he was correct! $40/hr for a kayak.

We considered taking a longer hike, either at Lake Louise or Moraine Lake but we ran into a minor issue at Lake Moraine — there was a sign at the trailhead of all the longer hiking trails that said you must have 4 people to proceed because of bears. We tried to figure out why they thought 4 people could defeat a bear but not 2. Perhaps the bear would eat 2 people and the other 2 could run to get help. In the end, we decided to turn today’s journey into an extensive drive rather than a hike. 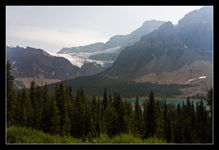 Our next goal was to find more glaciers. We started driving up the main Banff highway, but we encountered a small detour which involved passing by the ranger station who wanted to check if our park pass was still valid. It had expired 15 minutes earlier. We had to pay another $20 to proceed further down the road (I’m sure we would have had to pay if we had wanted to turn around anyway). Travis decided that since we had to pay another day’s worth of park fees, we better find some awesome stuff to take pictures of. We stopped at an overlook of Crow Foot Glacier, which is named as such because it originally had a 3-forked section which looked like a crow’s foot; however, it had since lost it’s bottom toe.

After that we stopped at Mistaya Canyon, which was a rushing river which dug some a really cool canyon into the rock. We walked around on the canyon rocks a little bit with Travis holding the loop on my camera backpack since apparently he doesn’t trust me to not fall into the river (I do have issues with not tripping over my own feet while walking). We then found the Columbia Icefield, which is actually located just inside of Jasper National Park (as opposed to Banff). We walked up to the Athabasca Glacier — there are signs on the ground marking how large the glacier used to be in years past. We took pictures at the 1992 mark since Travis thinks that’s when he was last there. It was impressive to look at just because you could get so close to it, but they didn’t allow you to walk on it since it’s unstable and people fall into the crevasses and that’s bad.

We also were lucky enough to find another roadside bear — this time a grizzly bear. It actually ran in front of the car and then we u-turned to take window pictures. We’ve been very lucky with animal sightings, except for the elusive moose. Tomorrow we head onwards to either British Columbia, Idaho or Washington — I think it’s one of those “let’s see how far we get before we get tired of driving days.” Should be fun! 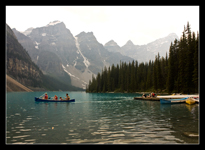 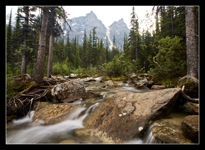 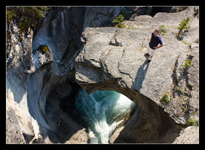 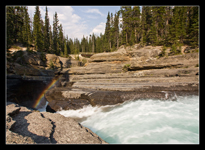 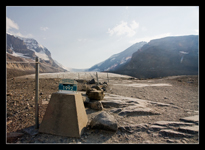 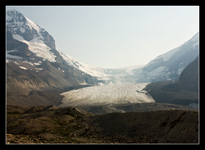 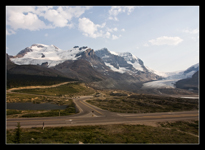 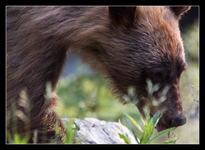 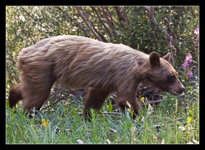 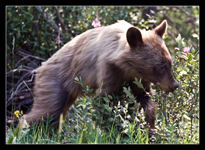