I was telling the truth when I said we’d go to the Mall of America everyday we were in Minnesota. It’s just a big mall, but there was nothing better to do nearby anyway. The first day we explored the 1st and 3rd floor, the second day we explored the 2nd floor (and I guess the 4th floor, which is only a movie theater).

The 3rd day Travis got a haircut, I took a few pictures and then we waited in line to get a book autograph from Les Straud who makes a Discovery Channel show called Survivorman. On his show he goes out into the middle of various nowheres and documents his survival alone for a week. We failed at getting the oh so important wristband to get into the autograph line, but we stood near the line and eventually succeeded in our purpose. It was cool to see him, since it’s actually a show we watch (or Travis does, which means I do also). He talked for a bit before the signing, then did some Q&A. Travis asked him what he usually eats when he returns from his survival trips — he responded “pizza and beer”.

We went to Teavana 4 times while we were there, which is a store which specializes in selling fancy iron cast teapots and loose leaf tea; however, they usually have 8 different teas to sample, so we went there whenever we got thirsty to get lots of samples. We also found samples at pretty much every chocolate store as well as and the Wisconsin cheese store. The people at the food court were trying to sample out food also — we could have made a meal out of free mall food samples. It reminds me of when I used to go to Costco on Saturdays and lunch off the samples.

Another store which amused me (not Travis) was the American Girl doll store. I thought it was crazy you can actually bring your American Girl doll there to eat lunch with you (they have special chairs for them), or you can pay $20 to have her hair brushed and styled at the doll salon. Travis’ hair cut only cost $14.

Oh, there’s also an amusement park in the middle of the mall (Nickelodeon theme) and the mall also houses the “World’s Largest Underground Aquarium.” Yea. 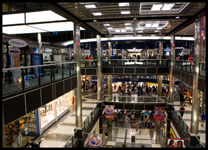 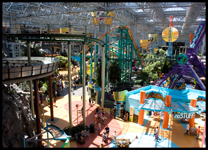 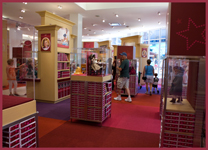 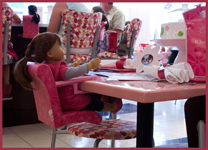 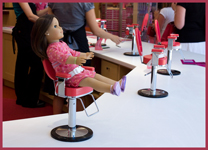 Other than the mall, were thinking about going to the Water Park of America attached to our hotel which is the “largest indoor water park in America” which “soars 90 feet over the Twin Cities skyline,” but when we went down there we were turned off by the large quantities of children running around the lazy river. We decided to play Lord of the Rings pinball excessively instead. I was excited when I got a score of 13.5 million (which beat Travis’ then highest score of 11.9 million), but then he went ahead and got 65 million. *sigh* I managed to get a respectable 45 million before we left. I also got some tickets from arcade games which I used to get a mini deck of cards and a box of Nerds. Totally worth it.