When we were in Seattle a month ago one of the things we thought about doing was watch a baseball game at the local stadium. We often consider this idea on our trip (we’ve actually considered rearranging bits of our trip around the LA Dodgers schedule), but thus far the only day we’d actually seen a game was Houston, TX, where we saw a Dodgers vs. Astros game. The second closest time was when we were in Boston and we wanted to go to a Red Sox vs. Rangers game but it was too difficult to get tickets so we just sat outside Fenway for a few innings and got a beer at the nearby bar.

Today we saw our second game of the trip — Seattle Mariners vs. Cleveland Indians. I don’t think either of us have a preference towards either team — Travis wore a LA Dodgers jersey and hat and I wore my Red Sox hat, just to show off our lack of preference. (I think we were both rooting for the Mariners though). The game started off well, with the Mariners taking a 2-1 lead in the first inning, and meanwhile I could see on the outfield scoreboard that the LA Dodgers had taken an early 0-1 loss in their game. The Dodgers were playing at the same time as the Mariners game and I like to heckle Travis when his sports teams lose.

I enjoy going to baseball games although they are more fun when there are more runs/action. I know that a 0-1 game is really great for the pitcher, but as the viewer I tend to prefer games a little more action packed (when I go to live ones, that is). Today’s game did not disappoint with the action, but it was not the home team getting all the runs. The Mariners held their 2-1 lead until the 4th inning, but then the Indians tied it 2-2. In the 5th inning, all went south when there was a home run followed by a grand slam followed by another homer, giving the Indians an 8-2 lead. After that it continued to go downhill, with the Mariners eventually losing 12-3. At least there was a lot of action though! Plus, I got to tease Travis as the Dodgers slipped to a 8-0 loss before pulling it back together for a slightly more respectable 8-6 final score.

I wanted to bring my camera to the game for fun, but the Mariner website said I couldn’t bring in a lens longer than 200mm. My longer zoom lens is 75-300mm and I didn’t feel like risking sneaking it in. I just brought my normal lens and took a few pictures of the stadium in general. Travis decided to try and catch a shot of the Mariner’s Ichiro sliding into 2nd base. I just wish I had brought a longer lens. It was “kids day” at the park, and they had “honorary <>” kids helping out around the stadium. I was jealous of the little honorary photographer kid. 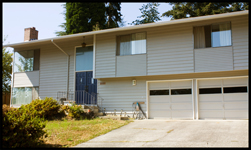 We ducked out of the game a little early (it was a hopeless score) to beat the crowds. We then continued our trend of revisiting places people used to live by driving by the house where my mother used to live for ~2 years during high school.

It was a good revisit to Seattle, and we got to see that baseball game we’ve been aiming to see for awhile. Tomorrow we head to Portland, OR for a few days, then begin our descent back into sunny southern California.