So while we were in Mississippi we did a few things (not much since we were only there for a day and a half), but we went to the Jefferson Davis property in Biloxi, MS and visited where my dad used to live in Ocean Springs, MS. We also wandered the local beaches, etc.

Beauvoir, the Jefferson Davis (Confederate President) property, had actually been fairly destroyed by Hurricane Katrina. Most of the buildings had been knocked down, but they had rebuilt the main building and had plans to rebuild some of the others. Travis and I started to wonder about how historical these sites are when the original buildings were knocked down after previously having been “re-beautified” once or twice, and how many times these things get knocked down/renovated before it becomes ridiculous to rebuild. I don’t know. It wasn’t too terribly exciting, although the main building did have some very nice paintings.

After that we were really hungry, and I had a craving for Italian food so I routed the GPS to a local Olive Garden 4 miles away; however, once we got to where it routed us, we realized that the Olive Garden (and the entire shopping center there) had been destroyed by Hurricane Katrina. Travis got his car in 2008, and the GPS maps were supposedly from 2007, so we were surprised that they hadn’t been updated. We then tried routing to another Italian restaurant down the road–it also not there. At this point we gave up and went to the buffet at a local casino.

After lunch, we wandered the beaches at Biloxi a little bit — there were a lot of destroyed docks with just wood poles sticking out of the water. There was also a strange shrimp boat floating right on the shoreline which I guess had been abandoned off the shore in July 2008. Hurricane Katrina did a lot of damage to this area, and it was weird to wander around all the destroyed areas even 4 years later. Some things were being rebuilt, and some things just seemed abandoned. It’s weird driving down the shoreline of a beach city and see the cracked cement foundations and weeds all growing up where there would have been all sorts of stores and restaurants before. 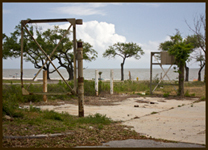 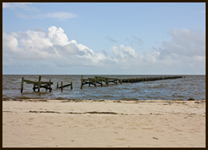 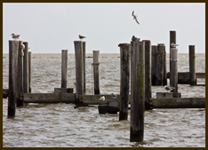 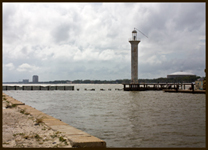 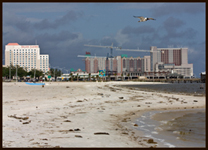 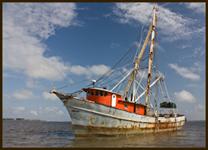 After that we drove to Ocean Springs, MS to see where my dad and Aunt Julie lived in high school for a few years. We plugged the street name into the GPS, but it was only letting us pick 5 digit numbers rather than the 2 digit address I had been given — I guess they renumbered his house something in the past 30 years. We found it eventually though — we actually pulled into a culdesac to check the numbers on the houses, and were confused we couldn’t find his place, so we called him and he described it to me and it turned out we were right outside.

My aunt sent me some pictures of the property from the 70s, and I took some from now. It looks mostly the same, just new door, shutters (some missing now), lamps… Plus the current owners apparently don’t believe in using the driveway. 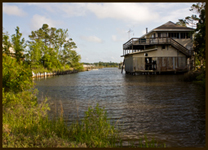 After Mississippi, Travis and I decided to head onwards to Alabama or Florida. By the time we found the cheapest motel options in Alabama, we realized we’d passed them by 10 miles, and decided to drive onward to Florida instead. We got to Pensacola, FL last night, and then wandered the beaches there today. We went to Gulf Islands National Seashore, and a few other places in search of a campground.

We also encountered the Thunder Beach Motorcycle Rally in Panama City, FL, which was a terrible experience. Not that I hate seeing thousands of bikers parked in every possible place and everywhere on the roads, it’s just had we known there was a 10-20 mile stretch of 20mph road covered by bikers (and no way to escape), we would have not taken the “scenic route.” I was so irritated by the bikers I didn’t even stop at the really sweet looking miniature golf courses in Panama City.

Eventually we gave up with finding a campground, because they all seemed to be full, so we stopped in Apalachicola, FL. Yay.