Today we woke up bright and early in Baton Rouge (or maybe it wasn’t *that* early) to go take pictures of the capitol building before we headed out to New Orleans. My guidebook had told me that the capitol in Baton Rouge was the tallest in the country — it’s definitely taller than CA and TX capitals considering it was 34 floors, and was probably the tallest building in Baton Rouge. They also have their older capitol building still standing, which looks like a cross between a church and a castle. We found nothing else exciting in Baton Rouge, and Travis was irritated with the crosswalks so we left for New Orleans.

Once we got to New Orleans we checked into our hotel and decided to locate some sort of food. Originally we wanted to be lame and get Subway, but we figured since we were in New Orleans we had to try all of the different food here. Last night we got some of our fishy food out of the way; today we decided to go for Po’Boys, which is a form of sandwich that our guidebook discusses thoroughly. I think the defining factor of the Po’Boy has something to do with mayonnaise, cabbage and tomatoes mixed with any meat you could possibly want. My Po’Boy had ham, turkey, roast beef, the obligatory mayo and cabbage, pickles, and was sitting in some sort of roast beef/gravy sauce. It was quite delicious. Travis, on the other hand, decided to opt out of the Po’Boy since he fears mayonnaise, so he got some fried chicken instead.

After lunch, sat in the hotel for a bit before taking a walk around the waterfront area and the French Quarter in New Orleans. It was a nice place to wander around, lots of music and people everywhere. We had already decided we were getting beignets for dinner (basically doughnuts covered with powdered sugar), so we were planning on wandering around the French Quarter until we found the beignet store. Luckily, there were telltale signs of powdered sugar all over the sidewalk leading to the 24-hour beignet place. Everything was covered with powdered sugar, including us by the time we were done with the beignets. Even the pigeons and little brown birds who ate the crumbs off the ground were dusted with a little sugar. 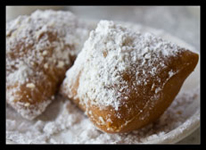 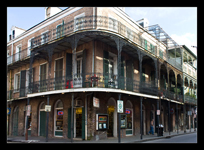 There were all sorts of entertainers everywhere. The one I decided to give my dollar to was the dog with the sunglasses who was just sitting on a stool posing for everyone. I don’t even remember seeing who owned the dog, but it was staring at me so I had to take a picture. We went back to the hotel after wandering through the French Quarter sufficiently, but with plans to go back out when it was dark to take pictures of the lights.

While we were in the room all night I managed to revamp my travel planning page, adding some little thumbnail pictures and all sorts of exciting information like what I’ve eaten every day of this trip. We actually had a lot of fun (while bored in the car one day) trying to remember all the details of food for the first 3 weeks of the trip. We make a lot of fun car games. The Louisiana car game is called “Name that roadkill.”

Anyway, once it was dark we went back to Bourbon Street in the French Quarter because that’s where all the excitement was. I took pictures, although there weren’t a ton of pretty lights or anything. I’m not sure what I was expecting. Maybe more little Christmas type lights on the balconies, because that’s what New Orleans at Disneyland looks like. Disney gives me unrealistic expectations about the world. 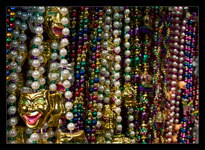 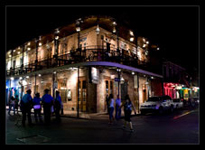 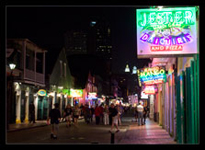 It was fun walking around at night — tons of people were in all the clubs and bars on Bourbon Street, and there was live music in nearly every place. We ended up grabbing some late night pizza, because there were a ton of places with slushies and pizza slices and eventually we gave in.

Tomorrow we plan to go to the aquarium (penguins!!) and wander around some more. I need to get me some mardi gras beads ^.^ Also, we have a few more New Orleans food places on our list we need to work on.

New Orleans Food List:
–
–
–
– Banana’s Foster
– Krystal (square hamburgers, apparently similar to White Castle (which I have never tried, but plan to when we find one)– must try Krystal to compare)
– Something Cajun seasoned
– Blackened fish

One thought on “New Orleans Wanderings — Day and Night”