I haven’t posted anything since we got to New York because I didn’t take any decent pictures until today. It’s been rainy/cloudy/overcast most days we were here, and I’ve been here 2 times *relatively* recently so it’s not as exciting as the first 2 times (as far as seeing the same tourist things over and over again purely to take pictures goes). Anyways…

I like New York — I like how there are always stores open and there are people everywhere. I like the crowds, it’s a cozy feeling. I like how New York is both a touristy area and also a living/working area — it’s a good combination. Miami beach was too touristy, Houston was too empty. I don’t like walking down empty city streets at night — I much prefer a city where there are people everywhere and I can get midnight $.99 pizza on every street corner.

We’re staying at Travis’ friend’s apartment, which is on W 48th St. about a block from Times Square, which made it really easy to find food and subways and everything else we could possibly desire. Over the 3 days in New York we didn’t actually do too much, I think because we’ve done a lot before. Last time we were here (about a year and a half ago) we walked extensively through Central Park, up 5th Avenue, went up the Empire State Building, walked by ground zero, went to the Museum of National History, etc, so we didn’t do any of that stuff this time (except walk through Central Park en route to delicious chunky half-cooked scone-sized chocolate chip cookies).

This time we took the subway to Brooklyn two different days — once to walk the Brooklyn Bridge to take terrible pictures of the city (it was both rainy and foggy), and once to walk the Manhattan Bridge to take better pictures of the city at night. While we were in Brooklyn tonight we walked over to the Hudson River to take pictures but got confused by a large group of people gathered there and a bunch of boats on the water. Travis thought maybe something bad had happened and they were searching for a body in the river, but it turns out there was a fireworks show which started about 3 minutes after we got there. I guess the fireworks were for “Children’s Day” in NYC. Yay for the children.

Other than that, we went to the MOMA (Museum of Modern Art) on Friday night because it was free (but very crowded). We went to some bars, wandered a lot, and got pastrami sandwiches from the place where Meg Ryan does the fake orgasm in When Harry Met Sally. I wanted to rewatch the movie for the billionth time tonight, but we got distracted and ended up in Brooklyn instead.

For pictures… I have a lot of grey rainy pictures of Manhattan and the Brooklyn Bridge, but I didn’t feel like trying to salvage any tonight since night pictures are far cooler. #1, #2, #3 are pictures of Manhattan as seen from Brooklyn and/or the Manhattan Bridge. #4 is an obligatory Times Square picture (there were far too many people there to try and setup a tripod or do something more exciting) and #5 is some random graffiti building Travis liked as seen from the Manhattan Bridge. I also have a large collection of grey rainy pictures, random fireworks and weird subway pictures, but grey/rainy pictures are gross, fireworks are too generic/boring since there’s no city in the background (the smoke was all drifting towards the city), and the subway is boring. I keep trying to pretend taking pictures in the subway is interesting, but I haven’t yet been successful. I really do like the subway though. I wish I had a subway where I lived, I think I would ride it all day.

EDIT: I decided that I needed 2 more pictures so that way there’d be 3 pictures in each row of thumbnails, so I took pity upon my rainy pictures and found one of the Brooklyn Bridge. Also added a picture of the view as seen from Nick’s apartment, which is awesome. If only I had $3500/month to spend on a one bedroom apartment in New York City. 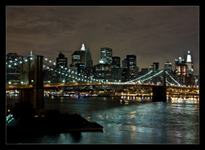 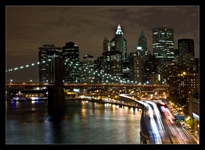 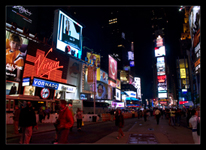 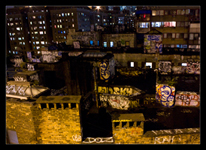 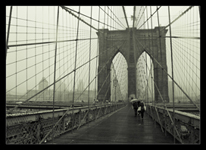 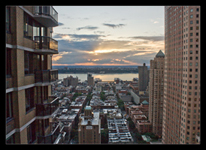