The Outer Banks is a strip of barrier islands off the coast of North Carolina. Our original plan was to take a 2 hour car ferry to the southern end of the islands and travel northward, but since we don’t plan ahead we called the ferry company the Saturday morning only to find out their morning ferry was already booked. Instead, we decided to drive to the northern end of the islands and then go south and backtrack.

I started off driving towards the Outer Banks, having fun complaining about ridiculous 35 and 45 mile per hour speed limits on open roads with a plethora of cops to enforce them. There was also a lot of random roadkill, oddly in the center of the lanes rather than the side of the road. I got used to assuming everything in the road was dead.

Finally the speed limit picked up to a much more reasonable 70mph, so I was cruising along and I saw something in the lane. I assumed it was dead, but as I got closer, I saw it was crossing the road. I then thought maybe it was a bird and it would fly away before I hit it. Then I realized it was a turtle. I barely straddled it with the car, but I saw it take another step after I passed so I figure I bought it another 2 minutes or so (if he didn’t pick up his pace). We saw another live turtle in the road staring up at the sky a few more miles down the road. Those turtles really need to reconsider their morning walk and sunbathing routes.

Once we hit the Outer Banks, we decided to go north in search of wild beach ponies. There are several beaches in North Carolina where you can find wild ponies, and I wanted to visit; however, one of the beaches was only accessible from one of the long ferries we didn’t take, and the other required four wheel drive vehicles to access (but you could take tours). We started heading towards the off-road tours, but then realized they were much farther up the road than we had thought, so in the interest of time (and wanting to get all the way to the south side of the islands), we turned around. We did stop at the Wright Brothers National Monument on the way south. There was a large green field and a lot of geese, along with a monument and museum. Kinda cool.

After that we drove southwards, stopping at the various lighthouses: Bodie Island Lighthouse, Ocracoke Lighthouse, and Hatteras Lighthouse. We also passed a random campground, and decided spur of the moment we would camp despite the 70% chance of rain (luckily it didn’t rain!). It was very windy though, but it saved us a lot of money since Saturday night hotels are never cheap. 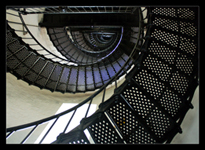 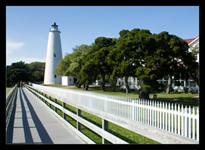 We had the worst meal of our entire trip on the Outer Banks. We were starving mid-afternoon, and Travis pulled over at a random restaurant called The Froggy Dog. Their service was terrible and slow, and their food sucked. Even the ketchup tasted funny. We’ve been to other places with poor service, but usually the food makes up for the wait. Not here.

After that we drove to the Ocracoke Island ferry, and we were the last car they could fit onto the ferry, which was really lucky (saved us 30 minutes of waiting for the next one). Ocracoke was supposed to be one of the places where the wild ponies existed, but I guess they didn’t like having random horses wandering around on the beaches and in the roads, so they went ahead and put them in a “Pony Pen” which was disappointing, so we went to go see the Ocracoke Lighthouse, and wander the seashore and look for shells before ferrying back.

We were unsuccessful at our shell hunting on Ocracoke, so we vowed to wake up at sunrise (and low tide) to look for shells at our campsite beach. Surprisingly, I woke up at 5:50am without an alarm, and decided I would go take pictures of the sunrise (pic at the top of the post) and hunt for shells. Travis ended up finding a small grey conch shell that wasn’t broken, and I acquired a collection of scalloped shells which now sit in the door handle inside the car and rattle while we drive.

After our sunrise walk, we decided to head out early so we could make it to Virginia (which was later changed to Maryland). We were thinking about looking for wild ponies on the Maryland/Virginia island called Assateague (or Chincoteague), but it was raining really hard so we ended up driving to Annapolis, MD and taking naps, since we were tired from waking up so early. Tomorrow we plan to wander Annapolis and Baltimore. We *could* go to Washington DC, but I can’t think of anything I’d want to do there.