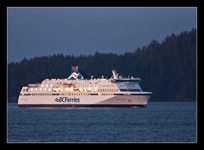 Sunday we woke up at the impossibly early hour of 5am to check-out and drive to the ferry dock. They request you arrive 1.5 – 2 hours before the 7:30am launch, so we got there promptly at 5:30am only to be greeted by a 40 minute line of cars to check in. Unlike the short 1.5 hour ferry ride we took from Vancouver to Victoria, this ferry didn’t have a cafe or shopping area to wait at (probably because they only run this ferry every other day), so we got to sit in the car until they boarded the boat at 6:45.

We parked the car and went upstairs to check in for our little cabin on the ferry. It was a small room, 2 twin beds, a desk and a washroom. We had a window facing the port side of the ship, and we were at the beginning of the hallway so whenever we wanted to go outside the doors were just a few steps outside our room.

The boat left right on time at 7:30am. We explored all the decks — there was several lounges, a restaurant, a cafe, a gift shop and a screening room for movies. The movies they had scheduled were some live action Dragonball Z and Music & Lyrics (and they also played the Wimbledon finals). We decided not to go to the screening room. We split some breakfast, decided it was too foggy to see anything outside and then went to go take naps. 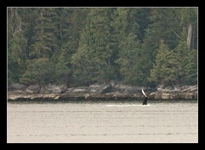 When I woke up from my nap it was around 10:30am. I was laying in bed debating whether to go outside where I could hear the captain’s announcements more clearly, or whether I should just sit in the room and read. They announced points of interest and animal sightings sometimes, but you could only hear them in the public areas. As I was debating whether or not to go outside, I heard a faint announcement from the main area that sounded something like *mumble mumble humpback whales mumble*, which was really all I needed to hear to start stumbling across the room looking for shoes and camera.

The whales were very far from the boat, so all of my pictures look like a big expanse of grey and fog with barely discernible fins splashing out of the water. There were several whales, and one was particularly active and kept slapping its tail against the water. I wish they had been closer to the boat, but it was fun to see whales regardless. 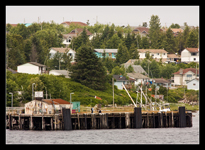 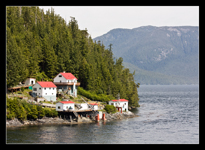 The fog began to clear midday, which made the route much more scenic since we could finally see more than just the bottom line of trees along the shore. We passed some small fishing villages and lighthouses and endless rugged mountains covered completely with evergreen trees. It was a very enjoyable ride, since there was actually stuff to look at along the way unlike the Mexican cruise I went on 2 years ago when most of the travel time was out at open sea. I just wish we could have heard all the announcements of points of interest from inside our room. And I wish the fog had stayed away. 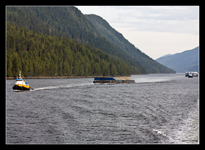 One of the last things we saw before the fog began to roll back in the evening was a duo of tugboats heading for Alaska. One of them had a bunch of containers, but the other seemed to be full of sand or dirt. Why Alaska needs to import sand from elsewhere is beyond me. You’d think they’d have a whole bunch of extra sand and dirt up there. Maybe it’s all frozen.

The fog began to roll in around 8pm. I thought it was pretty as we were driving towards it, but once it blanketed us it ruined any hope of seeing a sunset over the mountains. A few hours later, we did see a trace of pink silhouetted trees off in the distance below a layer of fog, but it was too far and too faint to take a good picture. 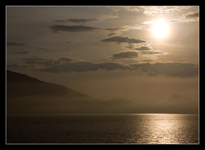 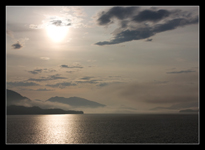 After the boat docked, we were one of the first cars of the ship which was good since we were the first in line at our hotel. As we drove up to the hotel I remarked that it reminded me of the Tower of Terror ride at Disneyland, because it was a dimly lit, dirty looking, tall building in the middle of no where. It was a little seedy looking. This was the first strike. We went to go check in, but of the 3 days Travis had booked online, they only had us down for one night (the following night), even though Travis’ reservation confirmation e-mail was correct. This was strike 2. They fixed the reservation issue and gave us a room on the 10th floor. We went to the elevators, and pushed the button. The light above the elevator showed it was on the 14th floor. We watched as the light moved down through the numbers — 12, 11, 10, 9… It got all the way down to the lobby floor, but it didn’t open. Travis pushed the up button again, and the down button just in case. The elevator didn’t open. We stood there for a few minutes glaring at the elevator, and it still didn’t open. In fact, the light that showed it was on the lobby floor turned off altogether. We eventually got tired of staring at the elevator door, so we climbed the 10 flights of stairs to our room. This was strike 3. They’re out! We’ll go to the next inning…

We were quite tired after the 15 hours on a ferry and climbing 10 flights of stairs, so we were happy to collapse on the beds, watch some tv and relax. About 20 minutes after we got to the room, the phone rang. Travis picked it up — the lobby had called up to say they had given us the wrong room. This room was reserved for somebody else on another day. They moved us to a room that was exactly the same one floor down. Exactly the same. We couldn’t figure out why they couldn’t give the other people the room they moved us to. Strike 4? *sigh*

On the bright side, the internet works and the view is nice.

One thought on “Northern Expedition”