Or just living out of a car, I suppose.

So the last few days have been pretty hectic for Travis and I, mostly because we procrastinated packing until the last possible moment. Here’s what we’ve been up to since the POD arrived…

Thursday, March 26th – POD arrives, 8am. Moved the few boxes we had packed downstairs. Created a rule “whenever you leave the house, you must carry something downstairs.”

Friday, March 27th – Packed up more random things, decided to have a “House Cooling” gathering on Saturday for the few friends we have (lol). Packed a few more boxes, cleaned up a little bit (not really).

Sunday, March 29th – Became much more nervous/worried about our Tuesday morning POD-pickup deadline. Packed *most of* the kitchen + bedroom; tried to organize things into piles of “bring on road trip” “pack into POD” and “trash.”

Monday, March 30th – Had some friends come over to take the fridge + help move the heavy furniture downstairs. Finally started breaking down computers in the office (they were the primary way we procrastinated packing). Dragged the BBQ downstairs, put a “FREE” sign on it — left it on the street. It was gone 30 minutes later.

I was a little antsy about meeting Tuesday morning packing deadlines (I had thought all day the POD-people were coming at 8am Tuesday), but then Travis told me they were coming between 11am-3pm, which was a lot better, since it would give us more daylight to move stuff downstairs instead of tripping down the stairs at 1am.

Tuesday, March 31st – Wake up at 7am; pack hardcore. POD pick-up comes at 11:30; we’re actually ready (surprisingly), but only barely. We were still packing when they called to give us a 25 minute warning. We watch all our stuff go off into storage (*cry*), but we aren’t done yet 🙁 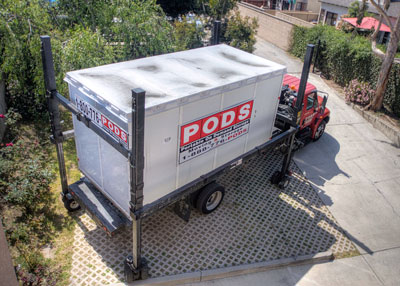 Now we have to clean the apartment 🙁 🙁

We were cleaning from when the POD was picked up at 11:30am until 6:00pm! I was so sick of cleaning, and very ready to leave. Finally, we finished cleaning at 6, split up to do a few errands, had some In’n’Out, and went to DISNEYLAND!

Pictures of some cool reflections coming off the side of our dusty future road home (and some Disneyland fun):

We were only there a few hours, but it was a nice way to see off some friends and spend our last night in Orange County.