Sunday we left New York City for the ~8 hour drive to Ohio. I suppose we could have stopped in Pennsylvania, but there wasn’t anything we felt like stopping at there. We got to Cleveland area around 8:30pm, which was still before sunset (barely) so I routed the GPS to a park on the shore of Lake Erie so I could check out the sunset and view. We got there just after sunset and started to walk down the promenade path which (I assume) goes down closer to the water. We didn’t get very far though, because there were swarms of bugs, everywhere. I’m okay with bugs in general (except mosquitoes), but there were just too many bugs here. There were huge swarms of them, circling around in the sky, and you could hear this faint humming buzzing noise in the air.

You see these pictures below? The one on the left — those black specks aren’t noise from my camera. No, those are bugs. All of them. The big fuzzy spot? That’s not dirt on my camera, it’s a bug flying at my face. And the picture on the right? You see the faint black streak coming out of the tree? That’s not a cloud, or smoke — that’s a swarm of bugs zooming up into the sky to wreak havoc and fly around my face. Needless to say, we got out of there pretty quickly. 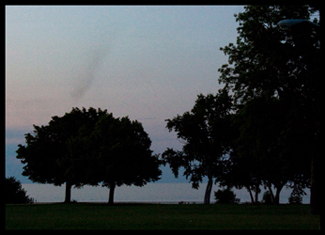 Today we continued our tour of the bugs of Cleveland. We drove to the downtown city area, which basically consists of 3 tall(ish) buildings, 2 less tall buildings, a football stadium, and the Rock and Roll Hall of Fame. We walked to the Rock and Roll Hall of Fame to see if there was anything cool in their gift shop (we were too cheap to go inside), and then took pictures of the “skyline.” After that we returned to the car for our drive to Detroit, MI. As we were walking back to the car we passed a large boat that doubles as a science museum and there were white bugs lining the bottom 3 feet of the boat. Ew.