As we drove to Death Valley from Bishop, CA, we didn’t stop *too* many places. Big stops were Manzanar and Mt. Whitney (both for semi-obvious reasons, perhaps). However, Travis was not that excited by the random ruins at Manzanar, and it was so cloudy we could barely tell which mountain peak was Mount Whitney. I did my best to take pictures of them all as they passed out of the clouds, but until I have my own internet to confirm, I’ll just not post any pictures (right now I’m using Travis’ computer, which is a bit awkward since I don’t have all my programs and photos handy).

But anyway, here is my random photos of Manzanar, which I thought was a nice detour: 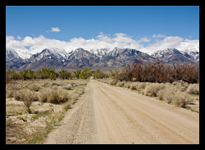 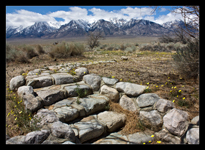 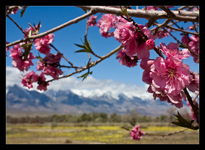 So after our wanderings of Manzanar, we visited some site called the Alabama Hills (I think) on the way to Mount Whitney Portal (which we didn’t follow the whole way) — the Alabama Hills were cool, a whole bunch of round~ish rocks. Plus, as we were heading out from there, we saw some wild cows! I was so excited. 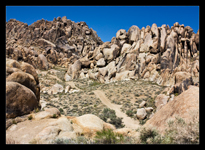 After that we headed to Death Valley. I haven’t finished going through all my Death Valley photos yet, because, honestly, it’s a lot of rocks. And sand. And dry stuff. So… I’ll just post a cool picture I took at the campsite — I saw these photos of “star trails” in the sky, and I’ve been wanting to try it out myself when I get to a location where I can actually see stars (last night in Death Valley was the first). So, I decided to try a method of making star trails where I merge the stars from multiple images (74 images) together rather than leave the camera out for 30+ minutes working on the same shot. I might try it a different way next time I have the opportunity (probably Arizona), but last night was a fun experimentation. 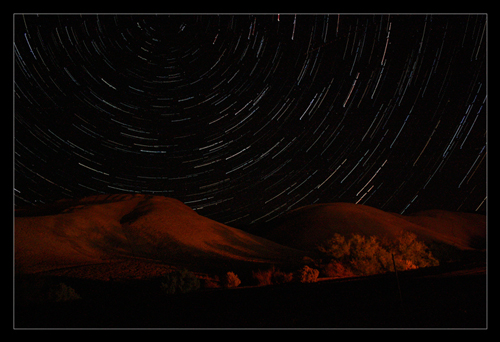 2 thoughts on “On the way to Death Valley”