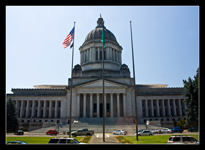 Today we left Seattle, WA and decided to tour the northern Oregon coast before driving to Portland, OR. We started out by driving towards Astoria, OR, which took us through Olympia, WA. I randomly remembered that Olympia was the capital of Washington, so (since I was driving) I decided we were stopping to take pictures of the capitol building and eating some mediocre Mexican food. 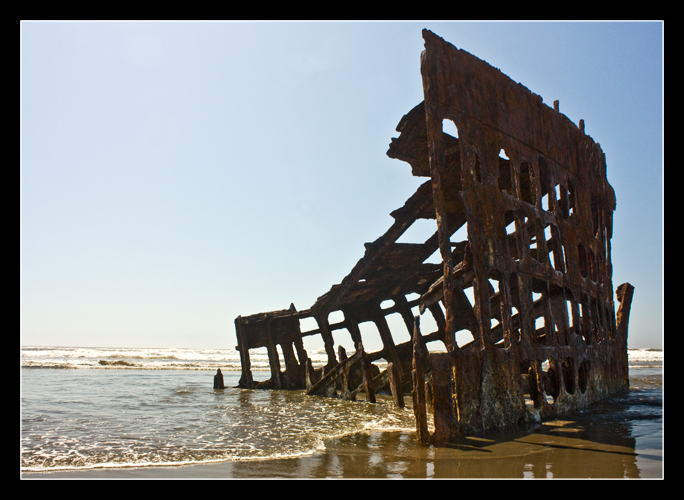 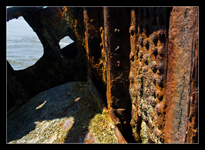 After that we continued onward to Astoria, OR. There was a Maritime museum in Astoria, but Travis wanted to look for shipwrecks since the area is nicknamed the “Graveyard of the Pacific” because it has a dangerous bar and a lot of ships have run aground over the years. It was mid-tide and rising towards high tide, so he wanted to look for shipwrecks asap rather than view the museum. We went to the Peter Iredale shipwreck, which ran ashore in 1906. There was not much left (except a lot of children running around it) but it was cool to see. I think it didn’t live up to Travis’ expectations, but it’s fairly impressive considering it’s been washed ashore for over 100 years. 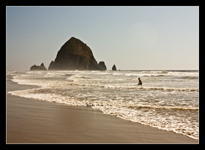 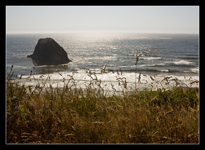 We then decided to drive southward, our primary goal being Meares Cape (for obvious reasons, I hope). We stopped at Cannon Beach, since the books we picked up at the Oregon tourist place mentioned it was one of the most photographed places in Oregon, and I vaguely remember vacationing there in the past. When I was 4~ish, I think my family met my aunt and uncle in Oregon (Cannon Beach, Cape Meares, and some waterfalls). I don’t remember much from the trip other than playing with my etch a sketch (or magnadoodle), seeing the large rounded rock at Cannon Beach, and fireworks my uncle set off. Travis decided that Cannon Beach was like an overactive California Newport Beach. It was really crowded. I think the best part was probably that we managed to snag a free parking spot on the main street through town. We walked to the big iconic rock of Cannon Beach, and then back. Travis had left his trashy shoes at the bottom of the stairs to the beach, half hoping that someone would steal them but alas, no luck there. 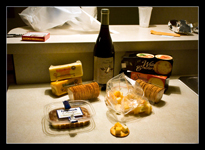 Our next stop was the Tillamook County Creamery Association, which is a cheese factory with a self-guided tour and free samples. We checked out the tour and samples, and then spent lots of time in the gift shop figuring out what to eat for dinner. We decided on a chunk of habanero jack cheese, a chunk of garlic chile cheddar cheese, and a sample bag of cubed mixed cheddar, jack and colby cheeses. We picked up a couple packs of crackers, a half pound of peanut butter fudge and a bottle of Oregon wine (from a local Safeway) to complete our local Oregon themed dinner. It was quite delicious. (Picture on the left, but ice cream sampler not included — we tried Tillamook’s Udderly Chocolate, Peppermint Candy and Caramel Toffee Crunch ice cream). 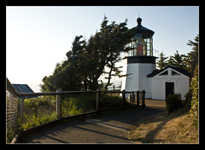 We also went to Cape Meares. I was jealous that it’s so easy to find properly spelled Travis and Teague destinations that I cherish any properly spelled Lindsay or Meares destinations. Cape Meares in Oregon is one of the few properly spelled places I know of in the country, so I insisted we go there for photo ops. I took pictures of the lighthouse (featured at the top of the post, and the right here), and I had to take a few obligatory pictures with the park sign (you might see me hiding on the left side). 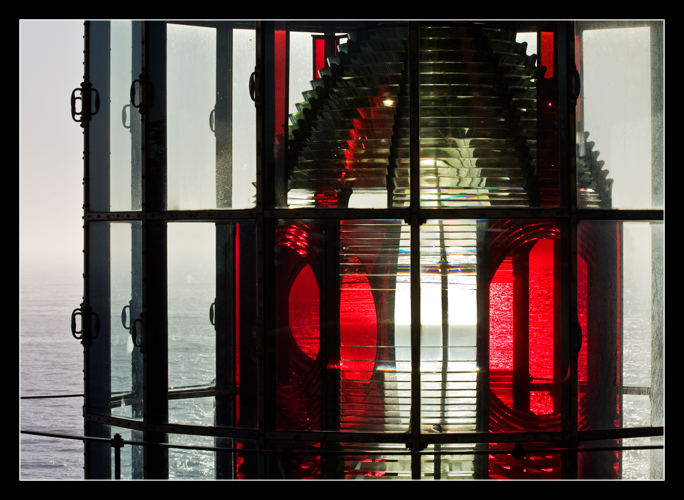