My house is different — it’s been repainted and the front stairs were moved. The mailbox was replaced and the backyard was fenced in. I remember when my sister and I would sled down the front steps into the street, and then shovel the snow so my parents wouldn’t know (they didn’t like us sledding into the street because of cars). That new stair-less hill in the front yard looks much easier to sled down, although it’d be more difficult to cover our tracks since we can’t very well shovel the snow off the grass.

I visited my old neighbors, our good friends who were like our east coast family. I got to catch up and reminisce with my neighbor Lindsay — the trio of us were inseparable as kids — Lindsay, Lindsay and Whitney. I remember the days of Barbie hair cutting and playing house, sledding in the backyard and drawing on the driveways with chalk.

I walked by my elementary school, Harrington, where I went from kindergarten through 5th grade — it is no longer an elementary school. It is now a building of offices for the Lexington public schools. I remember how I used to sit in a particular inlet in the wall waiting for my parents after school. The monkey bars and jungle gym on the upper side are overgrown and covered with weeds, it seemed sad. They built a new Harrington next door, all fresh clean brick and no dense ivy coverings — it wasn’t the same.

I went to the Lexington Center; they redid the interior of the library, so I couldn’t wander the children’s section where I spent many a day, or the young adult section where I would stop to get books before walking to the candy store across the street. The candy store was still there–Candy Castle–except now they have a nice classy counter with fancy chocolates and ice cream instead of all the little buckets of cheap candy I remember. I bought some jelly beans and Travis got an ice cream cone and we ate them in the park. Travis accidentally dropped the last little bit of his cone in the dirt and made whimpering noise like a small child. It was cute.

We drove to the Hayden Recreation Centre, home of the ice rink and summer camp I spent so much time at as a kid. The ice rink was closed, so I couldn’t go inside to see what was familiar — I know it’s changed though; they added a whole new entrance to the building. We walked the fitness trails behind Hayden, since I remember always going there with summer camp to learn about tree varietals and to look for the raspberries hidden off the path. We found no raspberries, but we found the end of the trail with the big field where the “big kids” used to play soccer. They were playing soccer still, but they weren’t the big kids anymore. We walked back to the Hayden fields, and I pointed out the “steep hill” where I acquired the scar on my chest from a small acorn when I was sliding down the hill on soapy tarps during summer camp. I wish I hadn’t slid down that hill.

We went to Boston, where I don’t remember nearly as much. The subway station hasn’t changed at all — I remember the thin lighted tubes hanging over the rails at Alewife as some sort of decor, and the white and silver trains with the big red stripe. I remember learning to sail on the Charles River in Boston; I saw the sailing place from the subway and pointed it out to Travis. I remember the Freedom trail, a red painted line / brick path that travels some of the important destinations of historical Boston. I remember hating the trail as a child, since it seemed ridiculously long and my parents stopped at every single historical point. It’s only 2 miles. Everything seemed longer as a child. I remember thinking going to the Skating Club Boston was a “long trip” — my mother would make me a grilled cheese to eat in the car it was so long. It’s only 21 minutes. 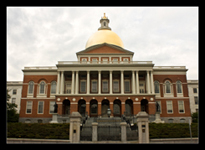 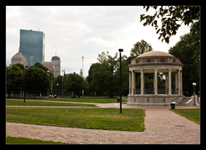 We walked all over in Boston — from Fenway Park to Commonwealth Ave, to the state capitol to the Public Gardens, to Fanueil Hall, the Aquarium, and Downtown Crossing. On the way back we drove by my house for the 20th time. I decided we had to drive by my house every time we could — it had to do with working up the courage to visiting the neighbors and asking to see my backyard or old room. I eventually worked up the courage today when I saw that their lights were off, their trash cans were still on the curb and there was a package on their doorstep. I rang the doorbell, and when they did not answer I decided to peek into the backyard to see how it looked. The dilapidated swing set my sister and I had played on is long since gone, and there was a much nicer play area instead. The deck my parents had built when we lived there still looked the same, and the small Japanese maple tree my mother had planted in the patio was still there, just much bushier.

It’s nice to revisit Massachusetts, even if it is so far in my past. So many good things happened there — elementary & middle school, learning to ice skate & synchronized skating teams, getting my kitty Belle…

We got Belle because one of our neighbors had 2 big black Labradors, and then decided to add a small kitten to the mix. The dogs and the kitten didn’t get along, so they offered her to us and we were more than willing to take her. This was 1992. She was such a sweet kitten, super friendly and very tolerant of young children pulling her tail or whiskers. She used to play with us in the yard, jumping through the leaf piles we would rake, or follow us through the snow, prancing on top of the snow while we tromped through it. She would jump on the BBQ grill on our deck up to the small roof outside my window and *ping* *ping* on my window screen in the middle of the night until I let her in, and then she would curl up on my bed. I remember the first time we let her outside we opened the big sliding door and she ran directly into the screen door. She was such a good kitty we brought her back to California with us when we moved, and she enjoyed a happy life drinking water from our swimming pool and napping in the California sun. When I visited my old neighbors in Massachusetts, they were shocked to learn our precious Belle was still with us. However, nothing lasts forever and today, after nearly 17 years, my parents decided that in light of Belle’s deteriorating health, it would be better for her to let her sleep.

Belle was my only pet, and she’s been there for nearly 3/4 of my life. I’ve never had another pet, and when I get one someday I hope it will be as precious and special as Belle was. We had her for almost 17 years, and she lived a very happy life where she was well loved and well taken care of. I know she’s been old and sick for awhile, but it’s still sad to know she’s gone, especially since I haven’t seen her for 2 months and I’ve finally gotten to visit the town we got her. 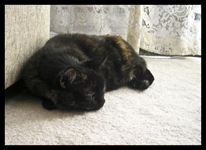 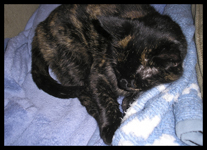