Time to restart blogging! The past week and a half has been a vacation (from vacation) for me, and a lot of driving for Travis. I flew home to Orange County on the 8th for a job interview (which I didn’t get) and spent time catching up with friends and family. Travis drove (by himself) from Prince Rupert, British Columbia to Calgary, Alberta with stops in Kitimat, Terrace, Prince George and Kamloops, BC, which is 1,237 miles of nothingness. 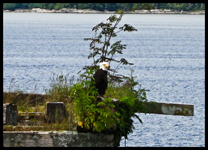 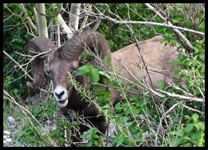 I wasn’t sure how to count the days of our hiatus, since he was away but I was home. I told Travis I wanted to just combine days 99 – 109 into a single entry on my trip details page, but he wouldn’t let me do it. I think he wanted an opportunity to list all the bad food he was forced to eat along his journey through the middle of nowhere, Canada. I left Travis my small camera when I went home, which he used to take pictures of various things he encountered on the way. He saw a bald eagle the day I left, and then rams on the road later in the week. I’m jealous.

Me, on the other hand, took my good camera home with me and didn’t touch it for the entire week other than a short photo shoot of my mother’s new dollhouse inhabitants and to annoy my sister. Other than my job interview, I spent the week preparing for the release of Harry Potter and the Half Blood Prince by watching the first 5 movies sequentially. I ended up seeing it at 9am on opening day (which was pretty uncrowded) and then again on Friday afternoon. I also saw UP in 3D. Travis saw Bruno. Later this week I’ll have to take Travis to see Harry Potter.

It’s really nice to be back in Canada with Travis. We are planning to finish up our trip and go back to Orange County again fairly soon, but it was important that I flew back to Canada so we can finish our trip properly. We’re in Calgary, AB currently, and then we are going to Banff, AB on Tuesday. After that we will likely make our way back through Seattle, Portland, Crater Lake, and then down California visiting our norcal friends along the way. Calgary pictures to come tomorrow!