Originally we were planning to spend 2 days in Yellowstone, but once we got there we decided that one super action packed 10 hour day would be sufficient. We did a good portion of the figure-8 road through Yellowstone, and I think we hit most of the important stuff (and if we missed something, I hope it was really ugly). We drove around Yellowstone Lake; stopped at the West Thumb Geyser Basin, Old Faithful (and the nearby geysers), Grand Prismatic Spring, the Upper and Lower Falls of the Yellowstone River, Tower Fall, and the Mammoth Hot Springs Terraces (and other random places in between). 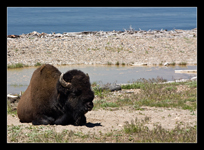 When we were in Badlands National Park a few days ago, one of my primary objectives was to find buffalo. I was disappointed when we only found one, and I had actually considered driving around South Dakota aimlessly looking for buffalo. It’s a good thing I didn’t. As soon as we got to the main section of the park yesterday, the first thing we found was a giant buffalo lounging on the shores of Yellowstone Lake chewing on some grass. This sighting was followed shortly after by a buffalo walking on the side of the road. There were a lot of buffalo in Yellowstone. 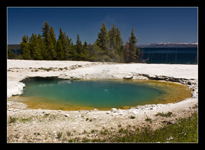 We stopped to walk through several of the geysers and hot spring areas. These were one of the main reasons I wanted to go to Yellowstone, because some of them are home to thermobacteria which create really pretty colors. It’s amazing the variety between them, even the ones that are fairly close to each other — some were clear with yellow rims, some were milky grey, some were angrily bubbling, and some were just very serene. 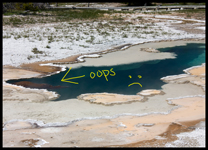 Our next stop was Old Faithful. We ended up getting to the location 15-20 minutes after the previous eruption (they are consistently around ~90 minutes I believe), so we had to wait an hour until the next one. We killed time by wandering around the paths through the other geysers in the area (which erupt randomly). We saw a couple of them bubble up and splash water. There was also a sad baby calf who had met an unfortunate end floating in one of the pools. 🙁

When we finally went back to go watch Old Faithful, there were a TON of people waiting to see. It seemed like more people than were there for the Space Shuttle launch in Florida. Old Faithful was right on time, and a lot more impressive than we were expecting (we had been thinking that since it was so consistent, maybe it was really lame).

There was another big geyser called Castle Geyser which erupts about twice a day, but since there had been a “minor eruption” in the morning, they couldn’t predict when the next “major eruption” would occur. It was pretty active though, splashing up water every minute or so. I wanted to stand around and see if we would get lucky and see it erupt, but Travis told me to stop stalling and we eventually left to go see more of the park.

After Old Faithful, we started driving down the road when, guess what, we found more buffalo! I had told Travis that we only needed to stop for large quantities of buffalo or baby buffalo. This stop happened to be a baby buffalo calf. It was most following it’s mother around and hiding behind trees, but there was a few seconds where it started bouncing towards me (before it stopped and went back to its mother again). I thought it was cute. Ish.

Our next stop was the Grand Prismatic Spring, which is Yellowstone’s largest hot spring. I was excited for this one since it had a lot of color, although all the steam made it hard to take pictures of the water. I like how there are buffalo tracks going across the panorama. 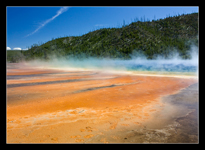 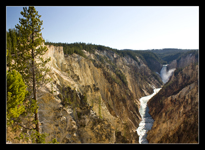 After that we went to go to the canyon area of Yellowstone. I don’t think either of us were expecting them to be all that exciting, since we’ve seen a lot of canyons and waterfalls on our journey thus far. As it turns out, the walls of the canyons along the Yellowstone River are (can you guess?) yellow! They were quite pretty in the afternoon sunlight. I’m not sure why we were so surprised — I guess we never really thought about why Yellowstone was called Yellowstone. I’m assuming these rocks were the reason. 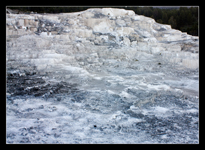 After the Yellowstone River, we went to Tower Fall and the Mammoth Hot Springs. I wanted to get to the Mammoth Hot Springs for sunset because they looked really cool in pictures — cascading tiered rocks with water running over them. I was a little disappointed when we got there after the sun had dropped below the mountains, so it was shady on the rocks, but then I realized that there wasn’t any water on the formations anyway. It was just the tiered rocks. There was an informational sign explaining how things change over time, etc etc, and that’s why the water was gone. Oh well. At least it didn’t matter too much that we got there after the sun went down. 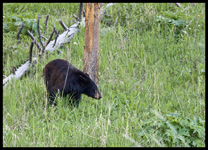 So other than that… Travis says I take too many pictures of animals. Yellowstone has a lot of wildlife. I was initially excited by the buffalo, but since they turned out to be everywhere the novelty wore off after the 3rd or 4th buffalo traffic stop. We really wanted to see bear, moose or elk. We got our wish in the late afternoon when all the animals started coming out. The bears, although elusive, proved to be easy to find once they came out because the park rangers would set up camp on the side of the road (I assume) to make sure the visitors wouldn’t chase the bears. 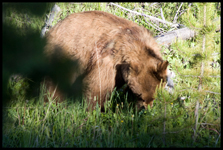 I assume this was probably a good idea, since the bears (they were little bears) did look a lot cuter and fluffier than the buffalo (you’re allowed to be 25 yards from the buffalo, but 100 yards from the bears). I would have liked to hug one. Especially the brown bear. They wouldn’t let us stop for the brown bear, since he was too close to the road, so I took pictures out the car window which ended up kinda blurry. Oh well. I’m sure you can see why he needed to be hugged though. Fluff. Other animals we found on our trip include elk, bunnies, chipmunks, and birds. We still have not found the elusive moose we’ve been searching for since Maine. Maybe someday! 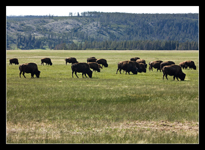 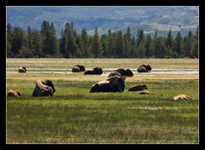 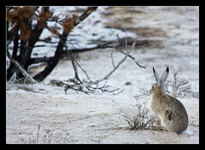 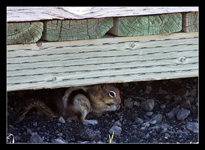 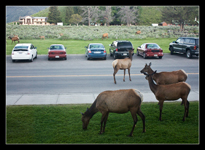 After all that we were starving, so we went to one of the restaurants inside the park. All was fine and dandy, until some elk started causing a ruckus. First it was a single elk standing on the side of the road eating grass. Then another one appeared. Then they started gathering into a large herd across the parking lot eating grass and playing around. The baby elk were cute and prancy. There was a poor ranger walking around trying to tell people to stay away from the elk (when the elk were everywhere). 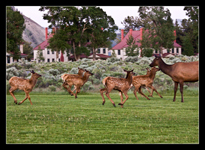 So ya, our trip to Yellowstone was very enjoyable, and we got a lot done during the time we were there. I’d like to go there again someday when we can plan ahead far enough to get lodging inside the park, and actually explore some of the trails (or see the small section of the figure-8 drive we missed). Next time I’ll have to remember to bring insect repellent and sun screen (oops).