We haven’t done much since we got to Vancouver. I’m honestly not sure what to do here other than eat everywhere and everything.

One nice thing about being in a city (rather than middle of nowhere USA) is there are a lot more food options. I got onto a Subway sandwich kick last week, not necessarily because I was trying to be boring or “healthy”, but because when you’re in a town that has only a random diner, pizza, a sushi restaurant (in the middle of nowhere), a McDonald’s and Subway, we start to trend towards the healthier of the familiar options. However, now that we’re back in a city with a plethora of restaurants, we have been having a good time making our rounds of sushi restaurants. I think the last time we had sushi was Sacramento. It has something to do with not trusting raw fish when you can’t figure out how far away the fish might have traveled from.

Sushi here is good. Travis also bought me a Japadog. Japadog = hot dog stand run by Japanese who put crazy stuff on the hot dogs like wasabi, teriyaki and seaweed. Travis only bought the regular beef and a jalapeno one, but after he brought them back we had to look-up an Anthony Bourdain No Reservations episode about Vancouver where he apparently went to this hot dog stand and got some hot dogs with crazy toppings. I want to go there myself and get a crazy spicy hot dog with miso and seaweed bits on top. Yum.

So anyway, we’ve been sitting, and what was originally going to be 2 days in Vancouver is now at least 4, which is why we’ve been lazy at actually doing anything. Today is Canada Day (Canadian Independence Day), so I expect there to be fireworks somewhere in the nearby area. I will have to find them later. 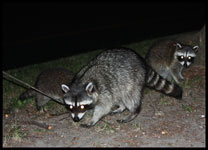 Last night we drove to a park to see what the skyline looked like. We were surprised at the amount of people in the park at 11pm. In the end, we decided it must have to do with the fact that in Southern California, there are 10pm curfews for a lot of the public scenic areas that might actually be nice to wander at night (like beaches), so it’s just unusual (for us) to see so many people enjoying sitting in a park watching the water at night. We also found a family of raccoons who seemed quiet huffy at the presence of people but still didn’t bother to run away when I used a camera flash in their faces.