Our stay in Montana was fairly quick (1.5 days), but we stopped at a few different places Travis remembered from when he was here a long time ago to see how they’ve changed. The first place we stopped was Berkeley Pit in Butte, Montana, which was a former open pit copper mine active 1955 to 1982. When they were mining the area, they used pumps to keep water out of the pit, but when they ceased production they turned off the pumps and the water level began to rise.

Apparently it’s become quite an issue, since the metal-contaminated water level is getting closer and closer to the natural water, so they are actively working to make sure that does not happen.

Travis visited here a long time ago, and he says he remembers it being a lot more impressive because the water level used to be lower so the pit itself was larger and deeper. Right now it just looks like a very large red lake. 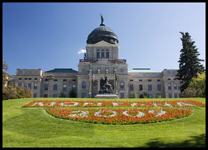 After visiting the Berkeley Pit, we went to Montana Tech where they had the World Museum of Mining, but we were too cheap to pay the $7 each to take their self-guided tour so we just wandered around the gift shop then headed onwards. Our next stop was the Helena, Montana for the state capitol picture. I don’t even care too much about taking pictures of these buildings, its just if we conveniently pass through the area I figure I might as well. 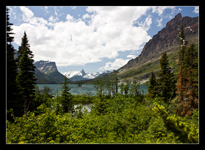 We also stopped at Glacier National Park in Montana, which we thought would be really neat since there’d be snow and glaciers and all kinds of good stuff. Turns out, their main 50 mile Going-to-the-Sun road was closed at the 13-mile mark from the west entrance. 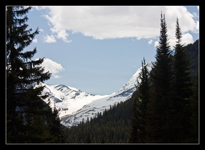 This allowed us to drive past the St. Mary Lake, some more elk, a small stream, and then turn around at the viewing point for the Jackson Glacier. The glacier itself looked like a particularly snow-capped mountain. I assume everything would have been more interesting had we been able to see more of the park, but we’ll have to save that for some other time.

Now we are in Washington, which means we are finally back in PST and there are Carl’s Jr.’s in the world again. I am more excited for when we hit California and I can get In’n’Out for every meal down the coast. Until then, Travis keeps feeding me roast beef sandwiches from Subway. Yum.