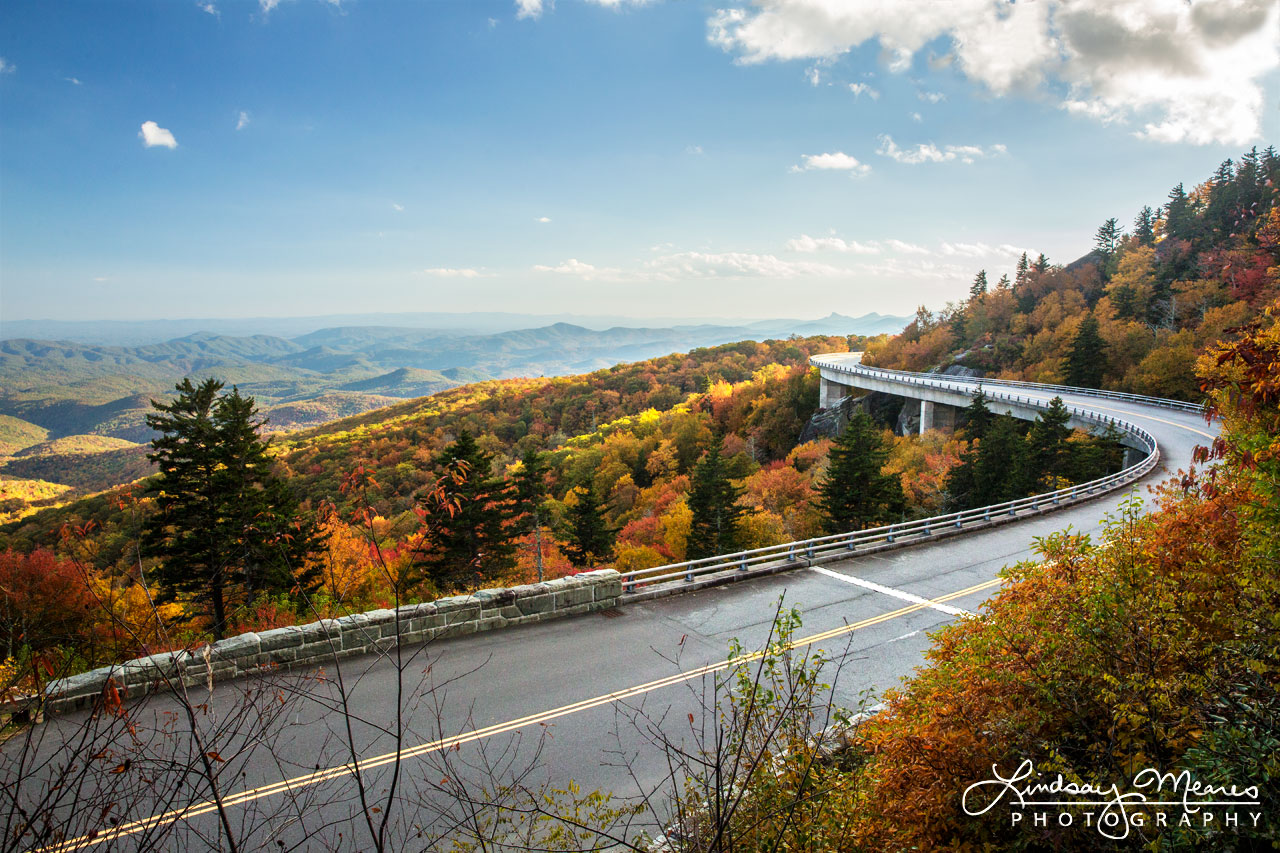 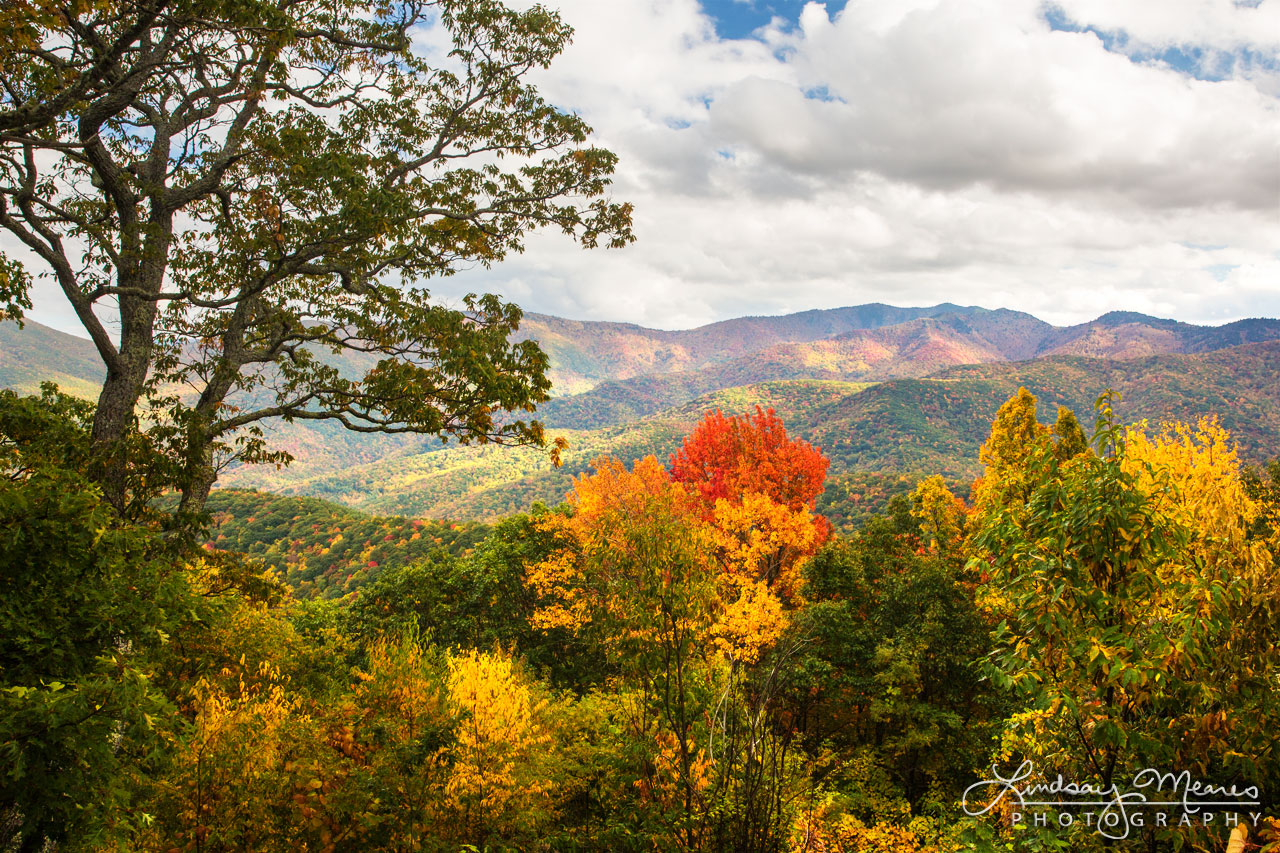 I finally caught up on some of my American the Beautiful coin art projects so I convinced Travis it was time to visit another! We decided on a weekend trip to North Carolina, mostly to drive the Blue Ridge Parkway. We also stopped through Great Smoky Mountains National Park.

The Blue Ridge Parkway is 469 miles long and extends from Shenandoah National Park in Virginia to Great Smoky Mountains National Park in Tennessee. We met up with the Blue Ridge Parkway around mile marker 290 (Blowing Rock, NC) and traveled the 179 miles to Great Smoky Mountains and back. The foliage was fantastic at higher elevations, and though we had a few foggy segments, the weather was mostly quite nice, allowing Travis to take full advantage of the bright yellow Mustang convertible he rented.

So we actually arrived in Charlotte late, drove to Hickory and slept there, but whatever. We got up nice and early to begin our drive along the Blue Ridge Parkway.

The drive started out alright; Hickory was too low for good foliage, but as we climbed in elevation the leaves got better and better. It also got foggier and foggier. 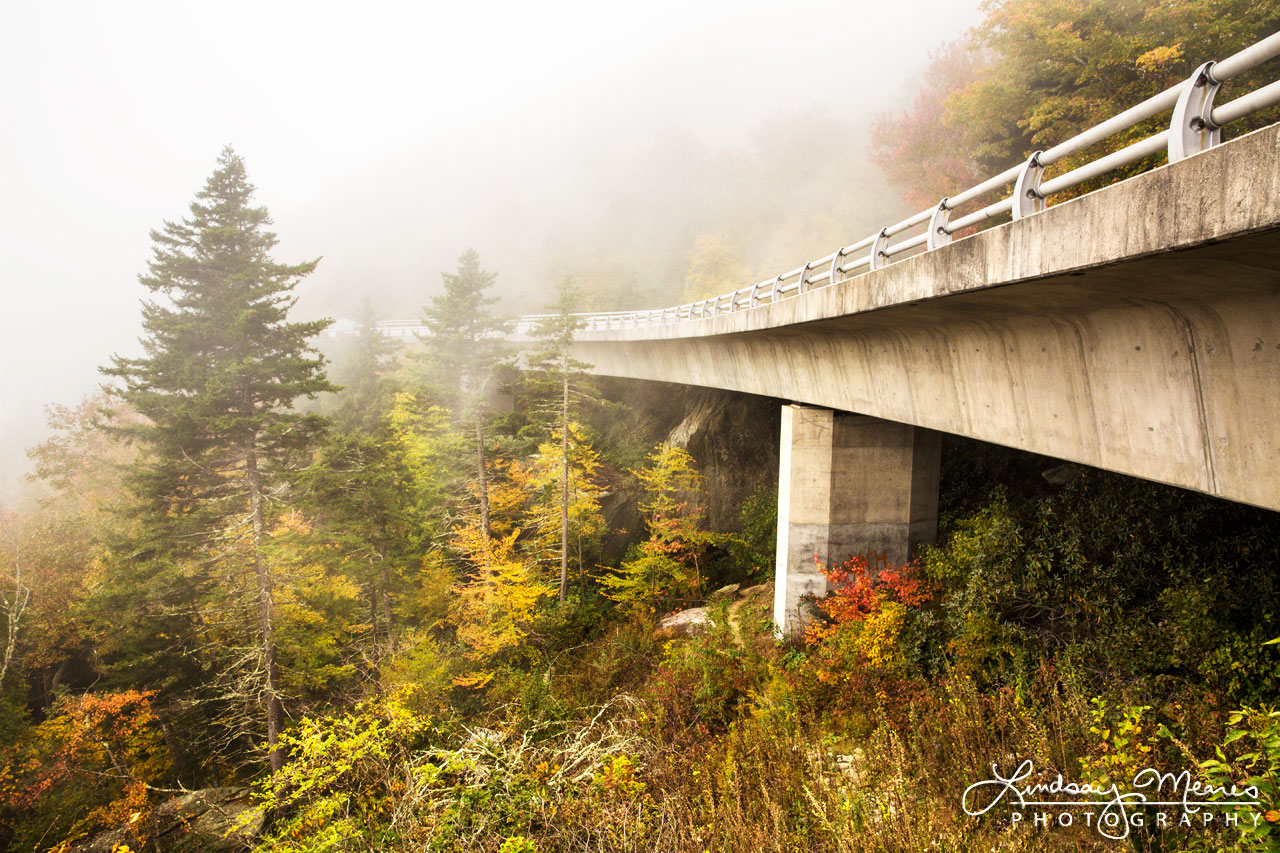 We tried to kill some time waiting for the fog to clear by stopping by an arts & crafts shop and wandering the visitors center, but the fog ultimately won. We did a little hike around the Linn Cove Viaduct, but decided we’d likely just drive by on our return trip to see if we had better luck another day.

Luckily, while the fog was pretty dense in some areas, it was very clear in others. Our next stop, Linville Falls, had perfect weather and views. 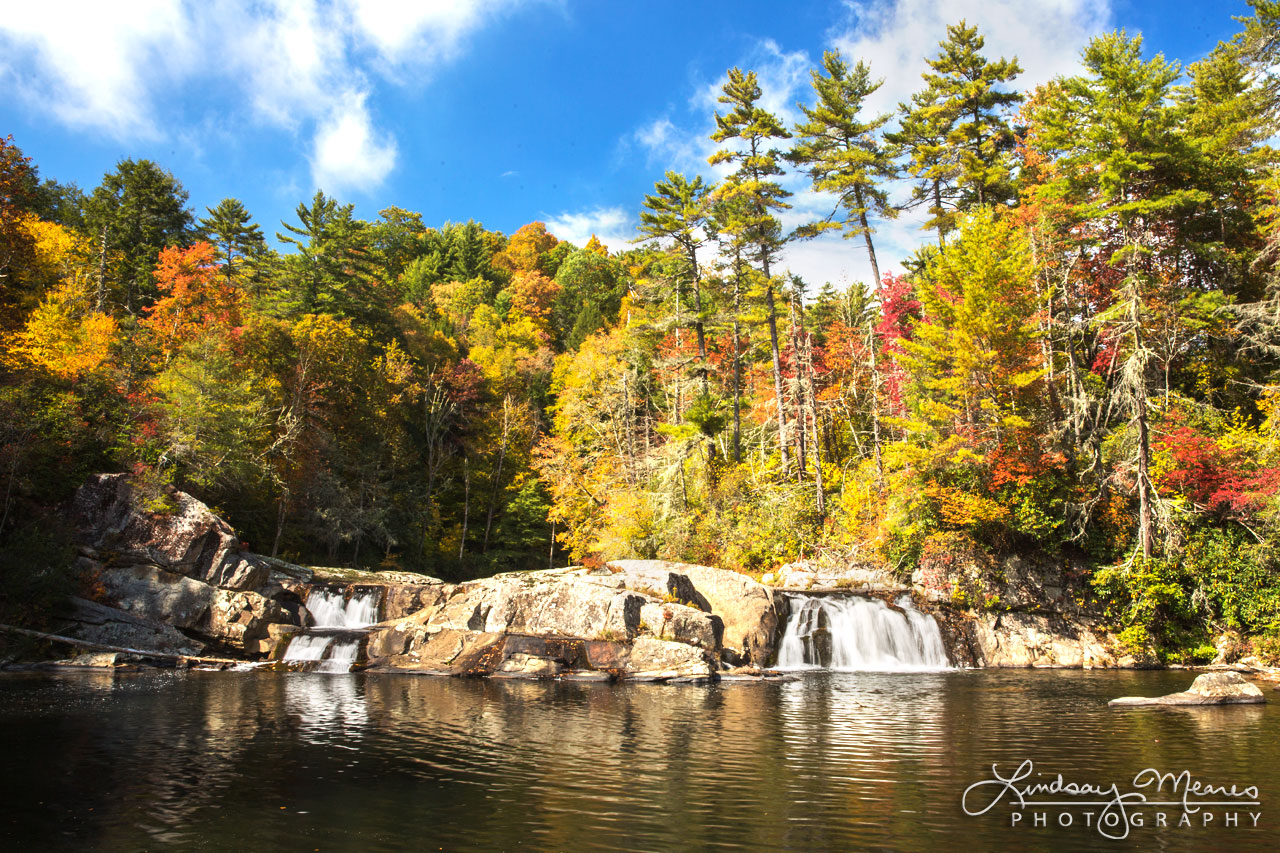 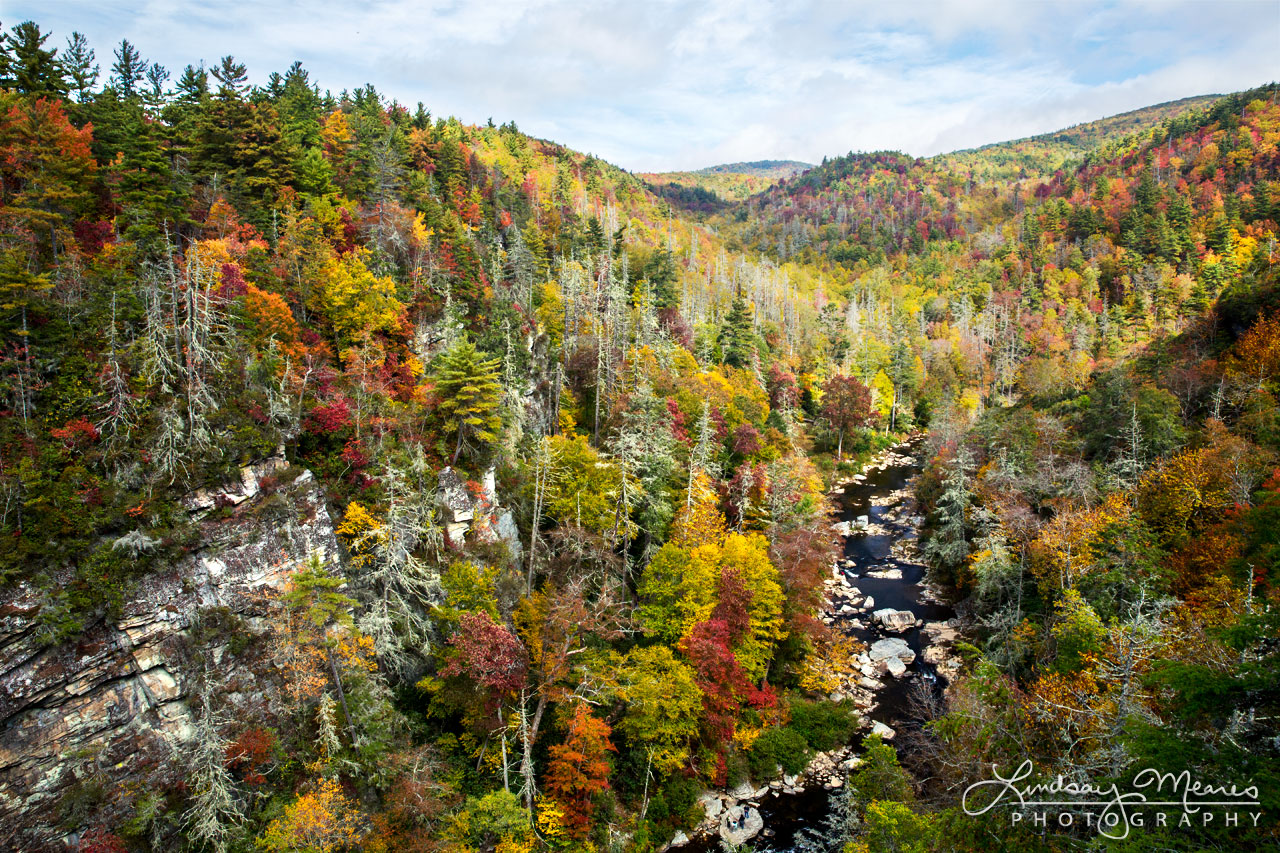 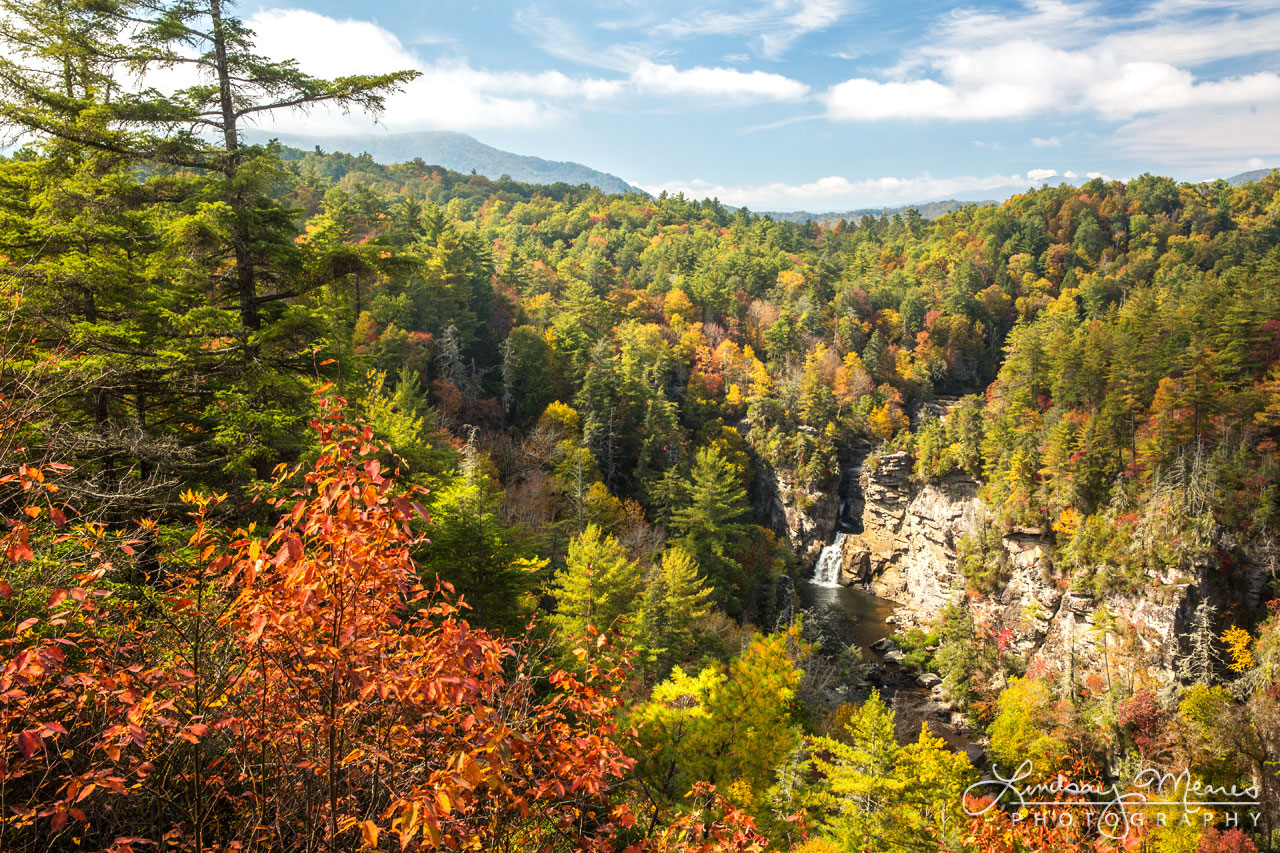 After Linville Falls we drove to Ashville, where we stayed at a nice Airbnb and spent 2 hours playing pinball at the Ashville Pinball Museum.

We started off our Sunday by eating a hipster brunch at Biscuit Head, a restaurant serving exclusively biscuits and gravy. I had a biscuits and gravy sampler with three kinds of gravy (fried chicken, bell pepper and veggie chorizo) and Travis got some sort of biscuit bacon sandwich with pork sausage gravy. They also had a jam/butter/honey bar. No regrets.

We thought about going to the Biltmore Estate (extremely large, fancy house and gardens) in Ashville but with tickets at $65/pp we couldn’t justify the cost. Instead we visited the North Carolina Arboretum instead, which was much more cost-efficient with only a $12 parking fee. There were some nice gardens and Travis found a storage shed that he would like to emulate in our yard, so I suppose that’s a win.

After that we started our trek to Gatlinburg, TN and Great Smoky Mountains National Park. 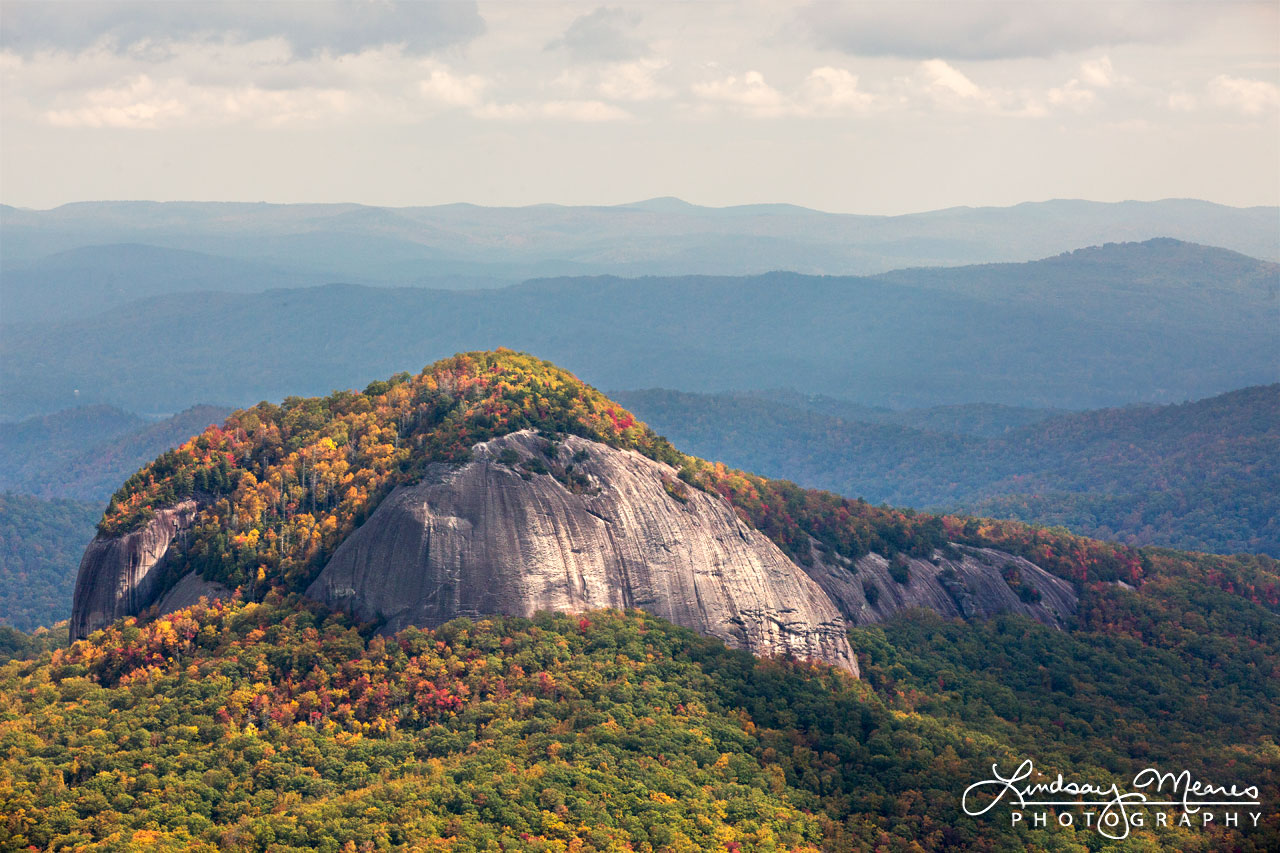 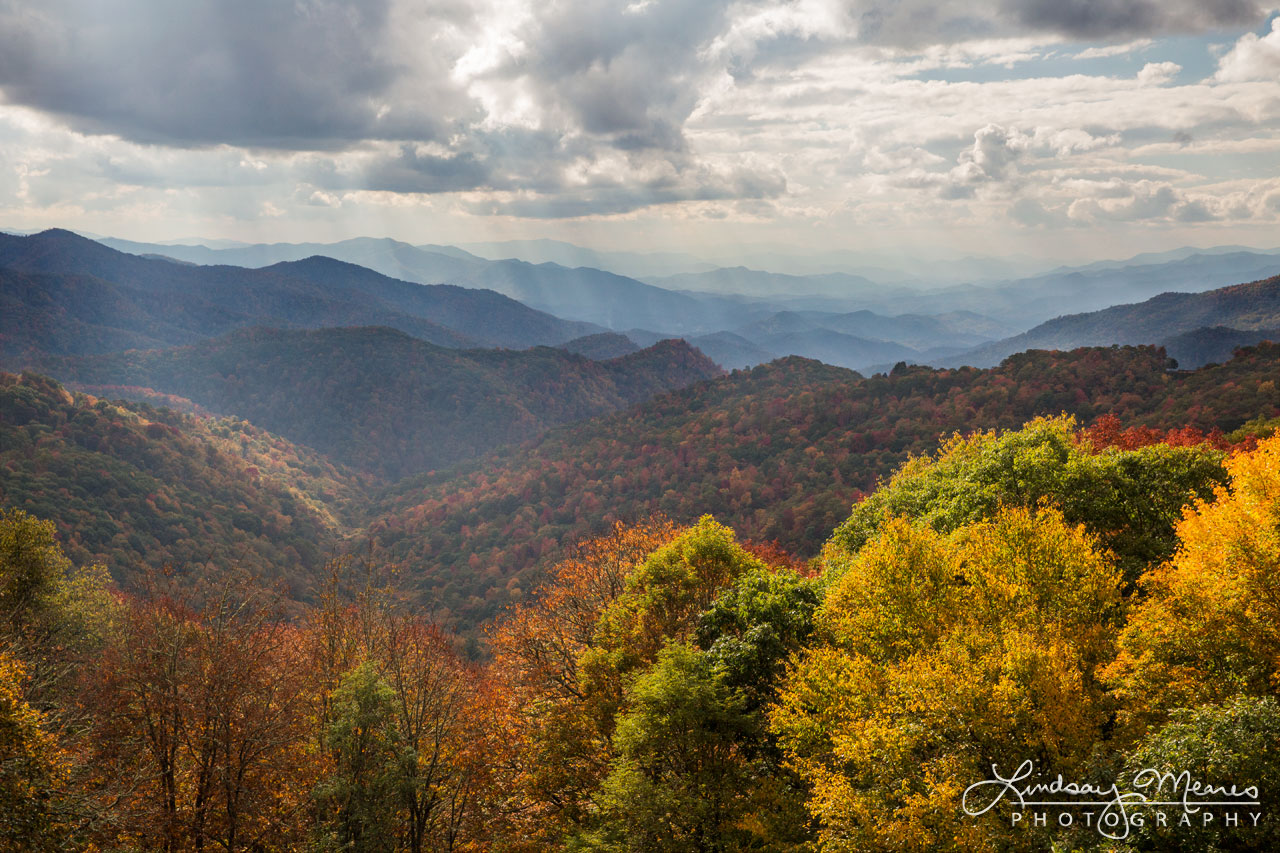 We got to Great Smoky Mountains by sunset, and decided to drive up to Clingman’s Dome. The fog was slowly rolling in as we explored, and in the end it wasn’t a very thrilling sunset. 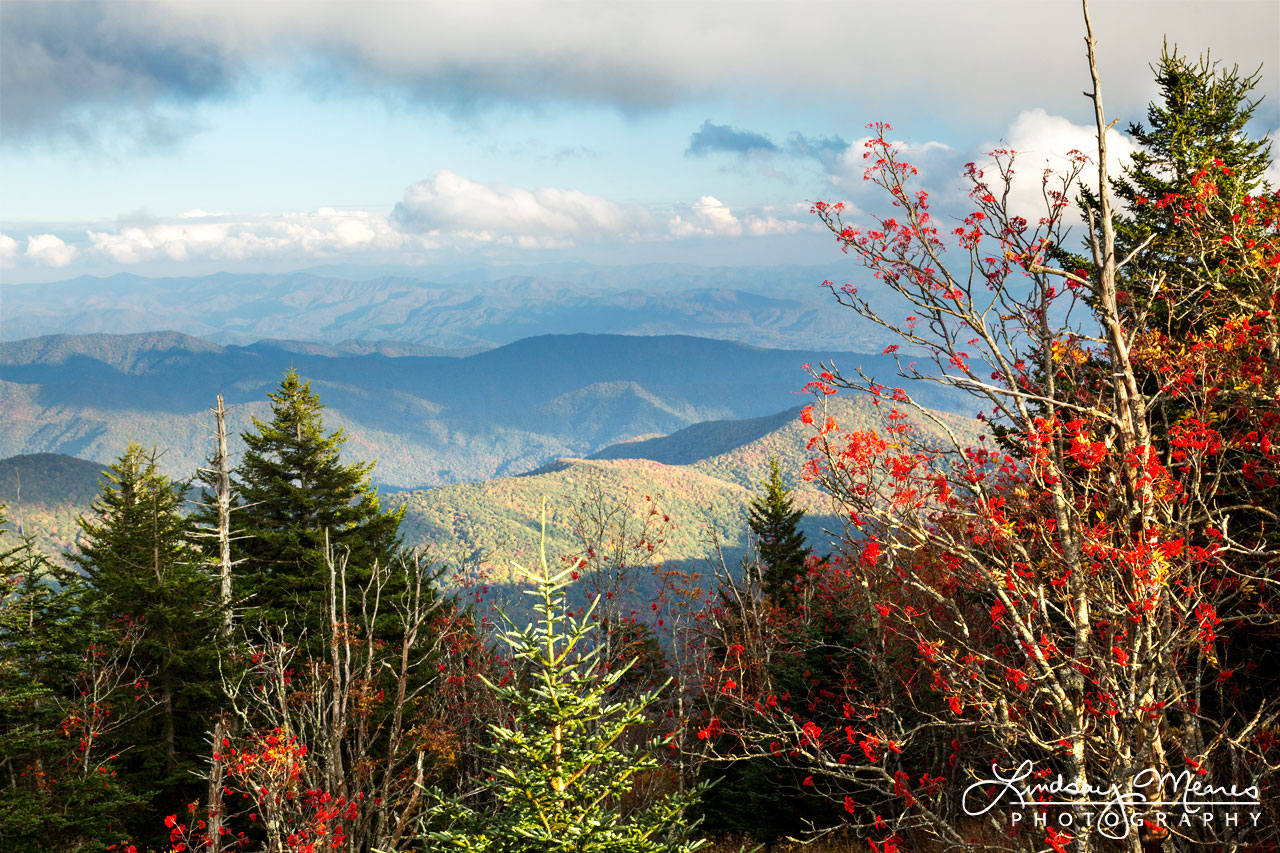 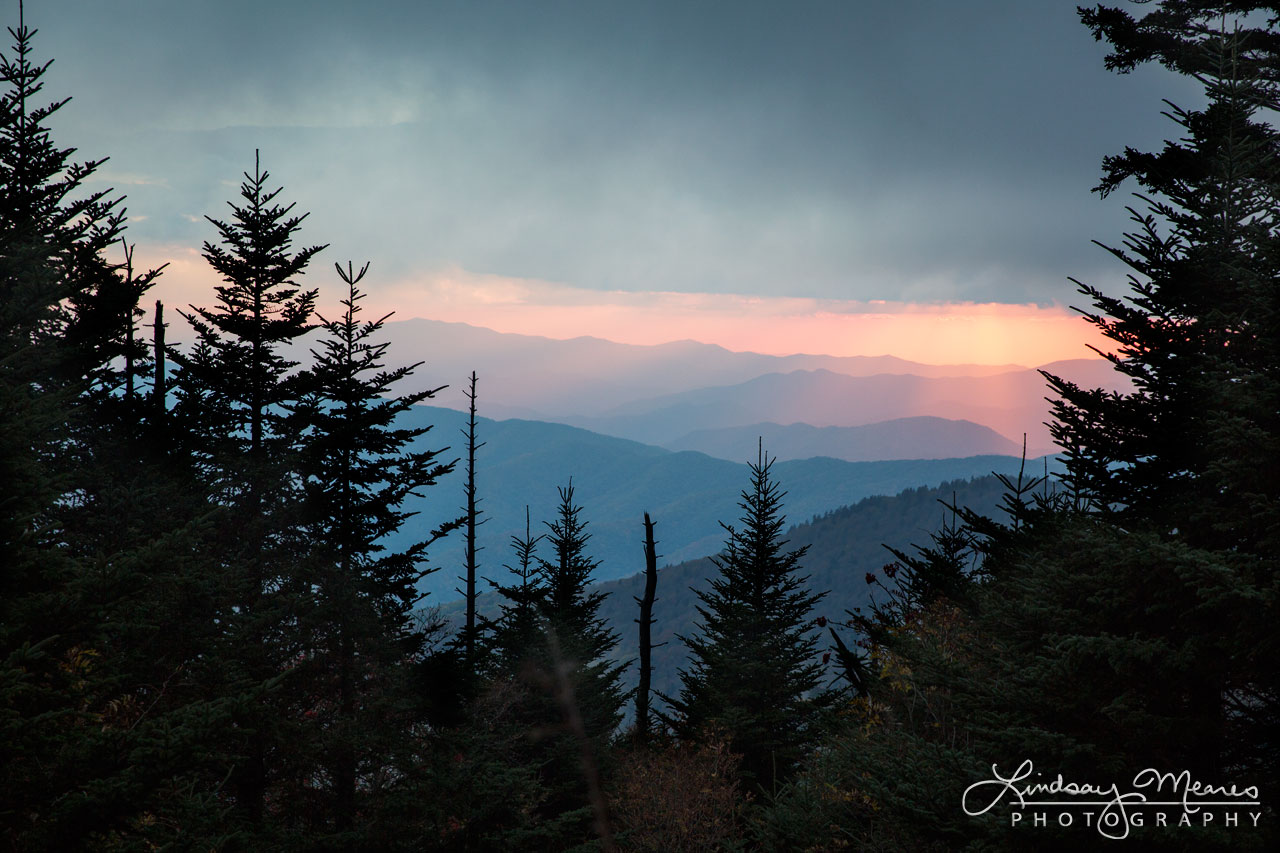 Final day! Back on the road, we drove into the Cataloochee Valley in Great Smoky Mountains National Park.

Cataloochee Valley is nestled among some of the most rugged mountains in the southeastern United States. Surrounded by 6000-foot peaks, this isolated valley was one of the largest and most prosperous settlements in what is now the Great Smoky Mountains National Park. Some 1,200 people lived in this lovely mountain valley in 1910. Most made their living by farming, including commercial apple growing, but an early tourism industry developed in Cataloochee with some families boarding fishermen and other tourists who wished to vacation in the mountains.

Then back to the Blue Ridge Parkway! 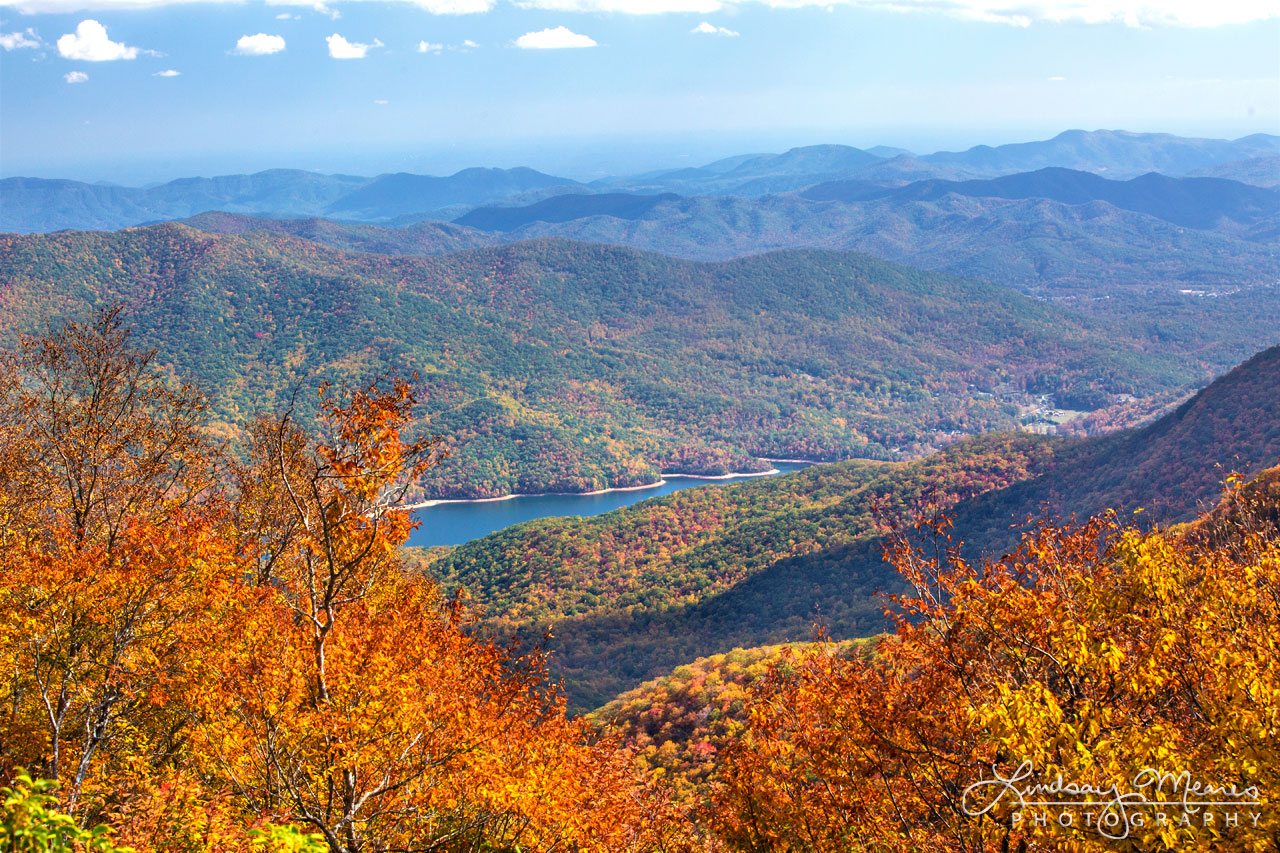 Our primary goal was to revisit the Linn Cove Viaduct, hoping we wouldn’t get fogged out again. We reached the area in the late afternoon, probably a little bit later than we would have liked, but the view was definitely much better than the other day.

We spent some time trying to maneuver our way onto the one big rock that overlooks the road (which was full of high school/college kids taking selfies). I couldn’t linger too long, because after the selfie kids went away there was a family with a bunch of kids that wanted photo time on the rock. Very popular rock.

After the vastly improved Linn Cove Viaduct view, we spent the remainder of the afternoon scouting out sunset spots. 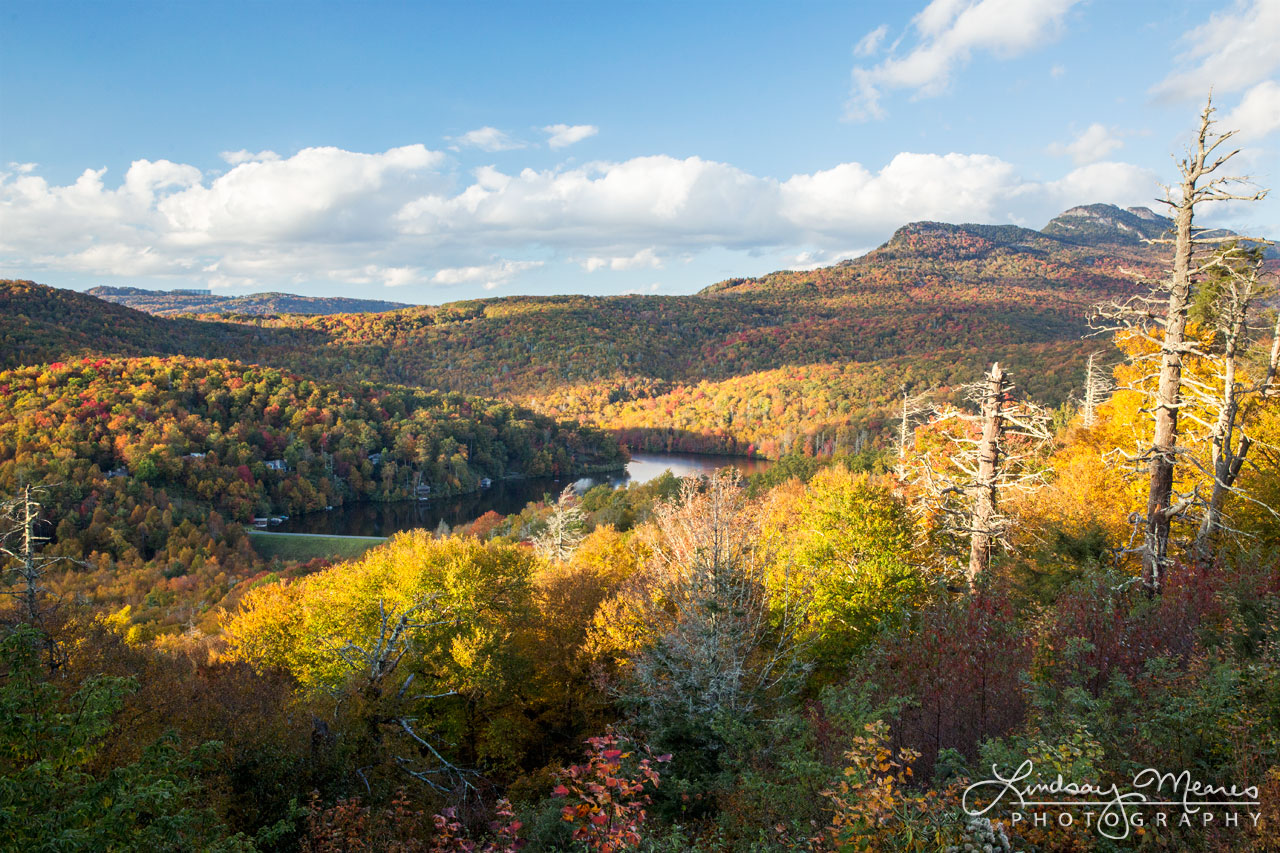 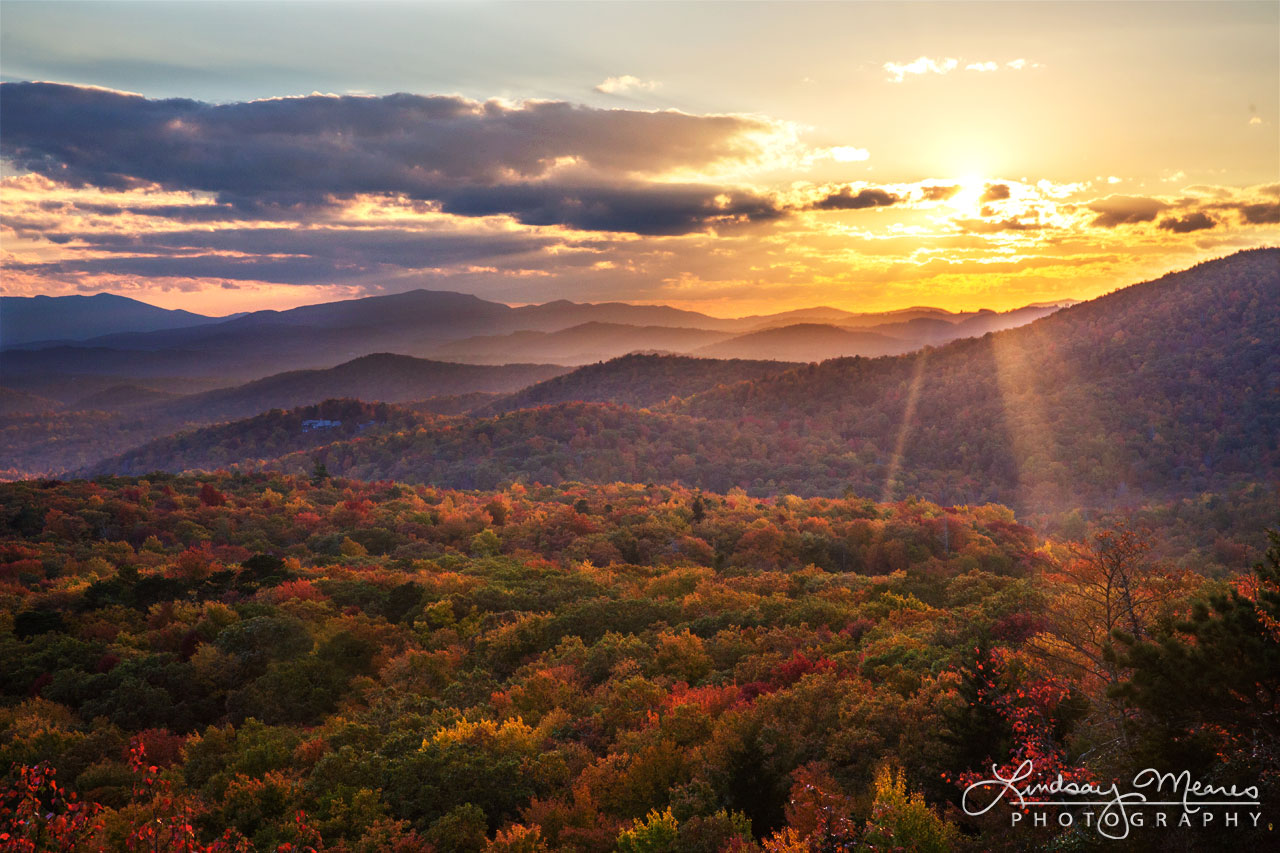 We probably could have/should have stayed at Beacon Heights Overlook for sunset, but for some reason we thought there might be something more at one of the other vistas so we left. The lower vistas were less impressive, so I had Travis go back to Linn Cove Viaduct for more photos. Pink sky and light trails! 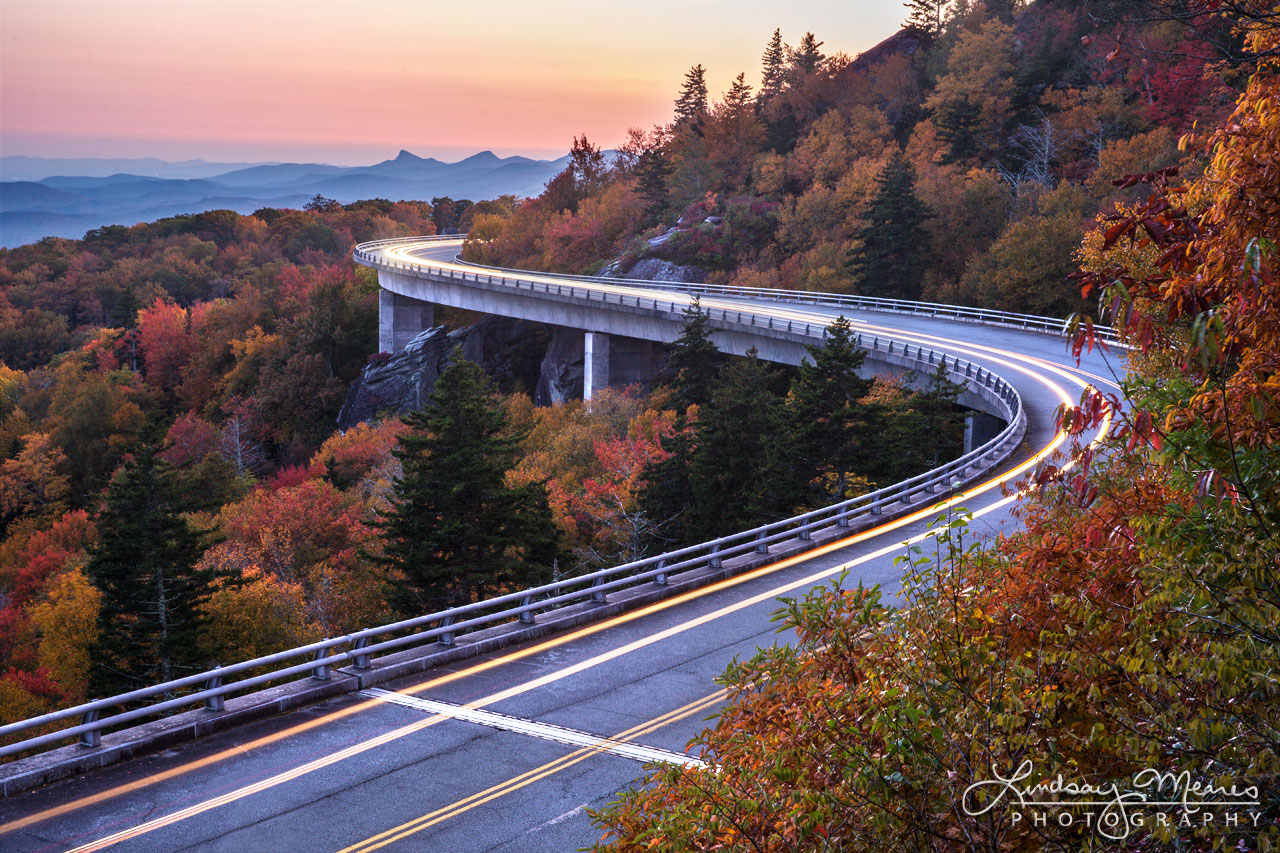 So there we go! After that we drove back to the airport in Charlotte for our return flight home. 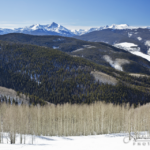 Prev Brrrr Colorado
Next Huntington Beach - I can't help myself I keep going back. 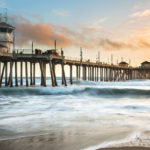