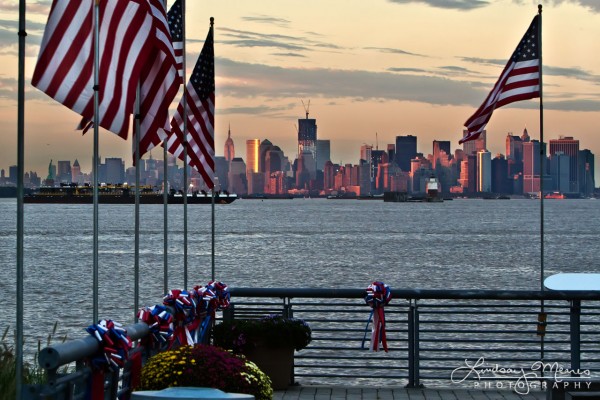 A work trip brought me to New York for September 10-11, 2011, the tenth anniversary of the September 11 attacks. I had work obligations the actual evening of September 11 so we decided to do an evening stroll of Manhattan on the 10th.

I was hoping they might test the Tribute in Light the night before the anniversary (and they did), so I was pleased I was able to see the tribute even though I was busy the evening of the actual anniversary.

We were staying in New Jersey for this trip, so we decided to drive to Staten Island and take the ferry into Manhattan rather than find a place to park downtown. Our timing (and luck) was not that great though, because we ended up missing the ferry time we intended to take on both ends, and had to wait an additional hour on both sides of our trip.

We planned to take the 7pm ferry into Manhattan (and on the weekends 7pm is when it starts hourly departures rather than on the half-hour). Anyway, we got a bit lost driving to the ferry, so when we got there we had only a few minutes to spare after we parked. We ran as fast as we could (with 20lb backpack of camera gear and tripod) and made it into the ferry terminal right as they closed the door in our faces. In fact, we had seen the door open, and thought, okay, we can make this, so we’d slowed down a little at the last minute. Bad idea.

So anyway, despite the angry yelling of other disgruntled travelers through the glass doors, they ultimately remained closed and we missed our 7pm ferry to Manhattan. 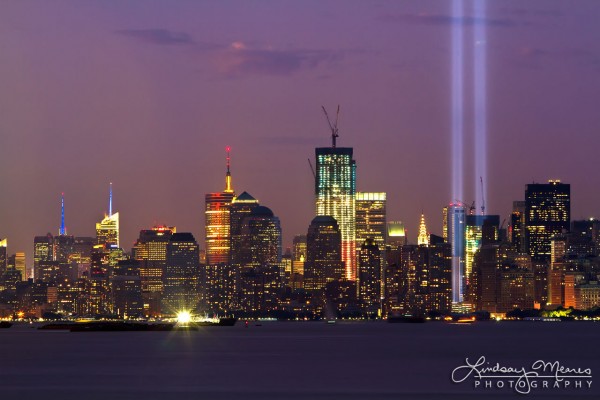 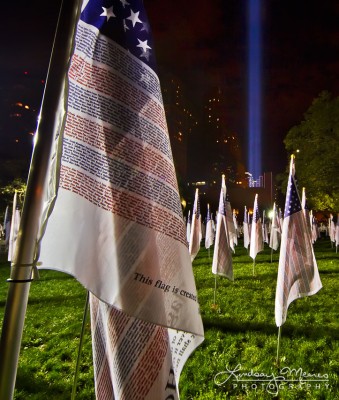 We decided to wander around outside the terminal waiting for the 8pm ferry. Sunset was at 7:14pm so I decided I was moderately okay with missing the ferry to Manhattan since instead I got to take lovely sunset photos of Manhattan. Then they turned on the Tribute in Light in the fading daylight and I was no longer even the slightest bit angry at missing the ferry — in fact, I was quite pleased.

We made our 8pm ferry without incident and messed around with some (unsuccessful) attempts at taking night photos from a moving vessel.

After arriving in Manhattan, we took some photos of the Statue of Liberty, then toured the One Life ~ One Flag memorial at Battery Park. As we were visiting the park, they finished their tests of the Tribute in Light so we decided to continue our travels through Manhattan (Goal: View of Brooklyn Bridge from Brooklyn and midnight pizza). 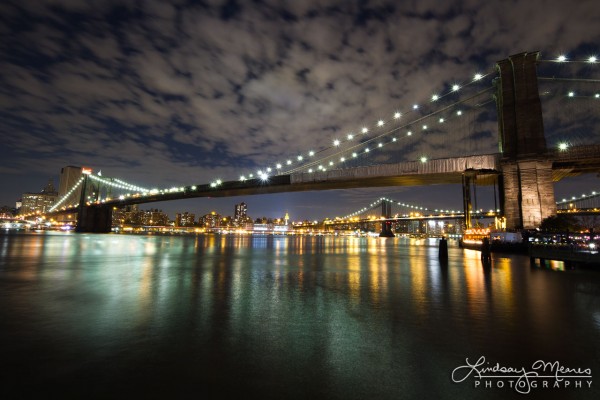 By that point we were pretty tired (and grumpy) from all the walking (~ 7 miles of wandering, maybe more). It was nearly 11pm when we finished up in Brooklyn, so by the time we found the Manhattan Bridge and ventured back to the ferry terminal it was about time for the 1:30am ferry, which we were determined to make. We were ready and waiting in the terminal, but then the ferry service cancelled the 1:30am ferry so we had to wait until 2:30am. We finally made it back to the hotel at some crazy hour and were extremely excited to sleep.

The next day Travis flew back to Texas and I spent the day editing photos in the hotel room waiting for the 4:30pm team bus for Metlife Stadium. However, I did not realize my laptop hadn’t updated timezones to EST so I ended up accidentally missing the bus and then had to find a way from Newark to East Rutherford using public transportation in season-opening NFL game 9/11 traffic. It was pretty fun. I am much more paranoid about timezones now.