Despite spending 3 nights in Moab primarily focused on Arches National Park, we did manage to visit a few other places in the surrounding area.

On our drive back from our sunrise tour of Arches, I saw a bird and asked Travis to stop. He seemed reluctant, mostly because it was just another waterbird that we see all the time in CA in the Bolsa Chica.

However, I really liked the way the trees and canyon walls reflected in the Colorado River, so I decided to take a few minutes to capture the colors. 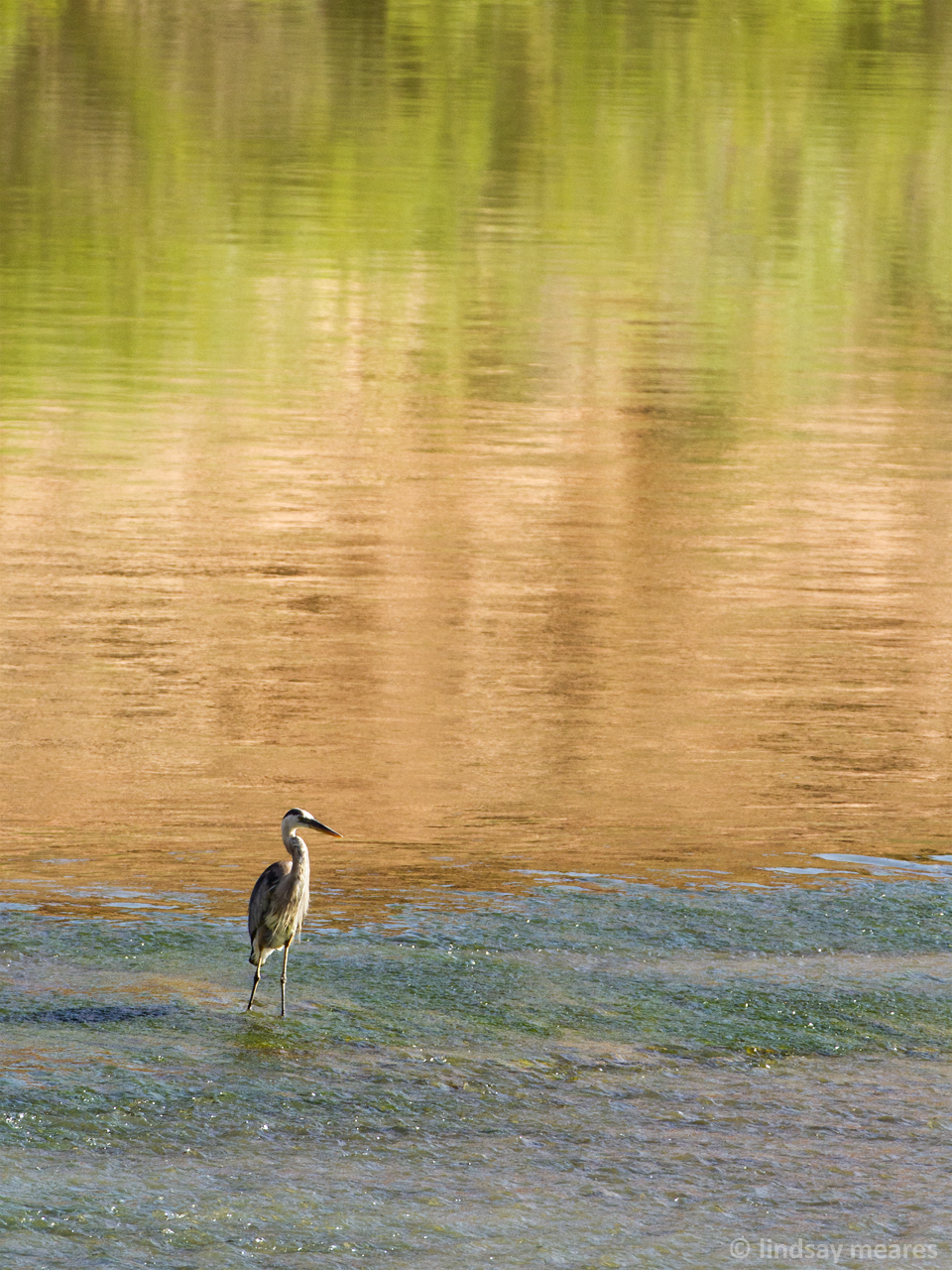 He may have had other ideas in mind when he booked it (rafting trips, relaxing, etc) but its location made our comings and goings from Arches National Park a bit arduous.

After my 10am-10pm Durango to Moab + 5am sunrise combo I decided to give him a 24 reprieve from Lindsay-required excursions.

He handled this by taking a nap, so I took some photos off our hotel patio: 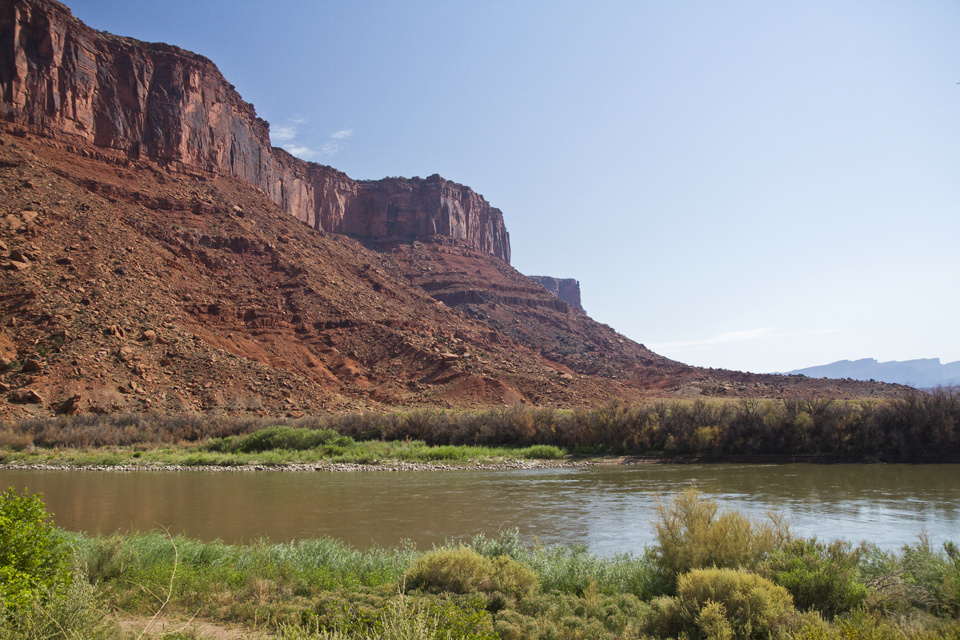 After his nap he was ready to meander. I let him pick the destinations, so we ended up at the Fisher Towers and La Sal Mountain Loop before heading back to Arches.

These weren’t too far north of our hotel. There was a nice hike there that would take you around the towers, but we weren’t much in the mood for that. I was wearing flip-flops and almost slipped a couple times, so Travis wasn’t too pleased with the large drop-off towards the base of the towers.

I did my best at not falling in (success!) and took some photos. They were super duper red, if you can’t tell. 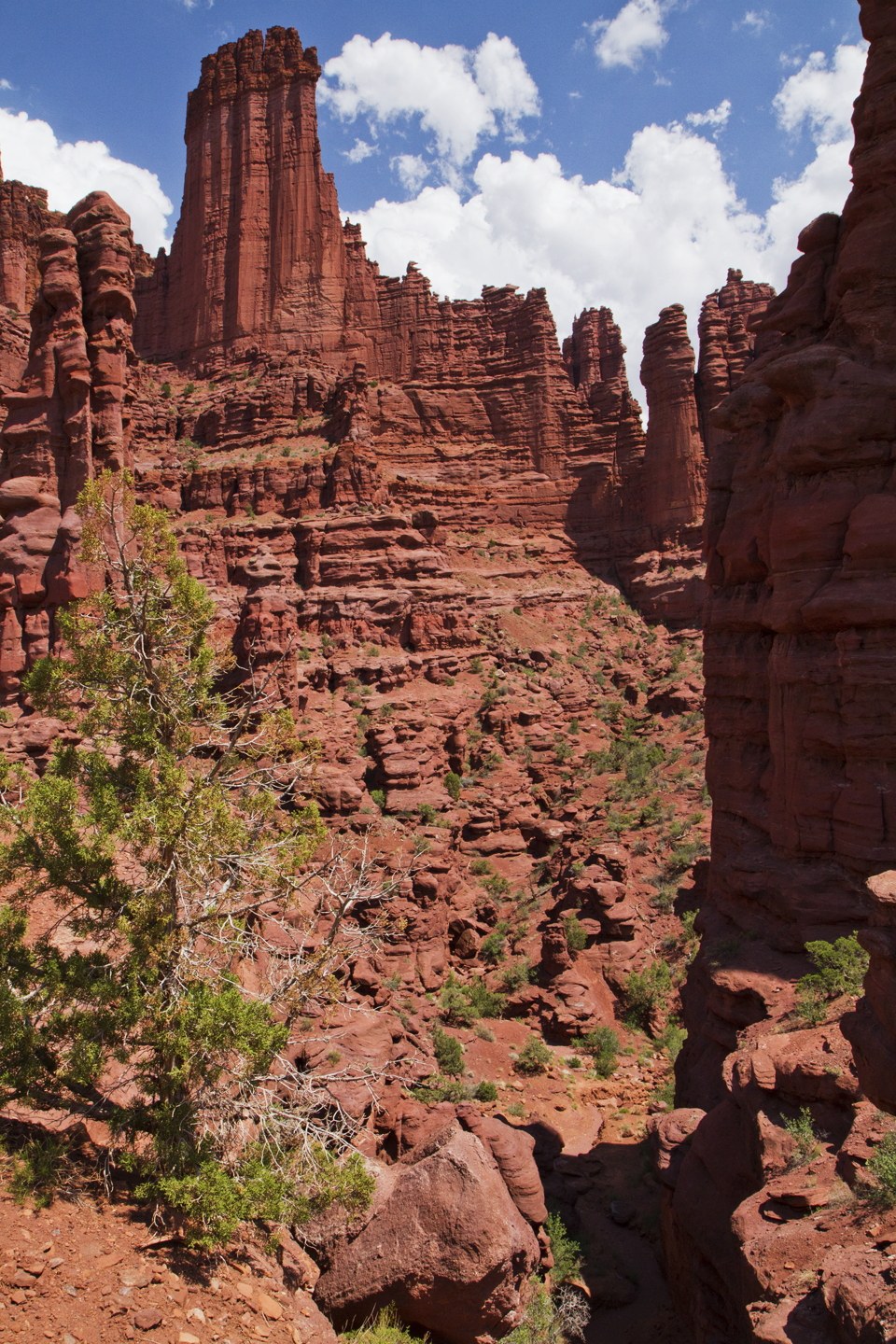 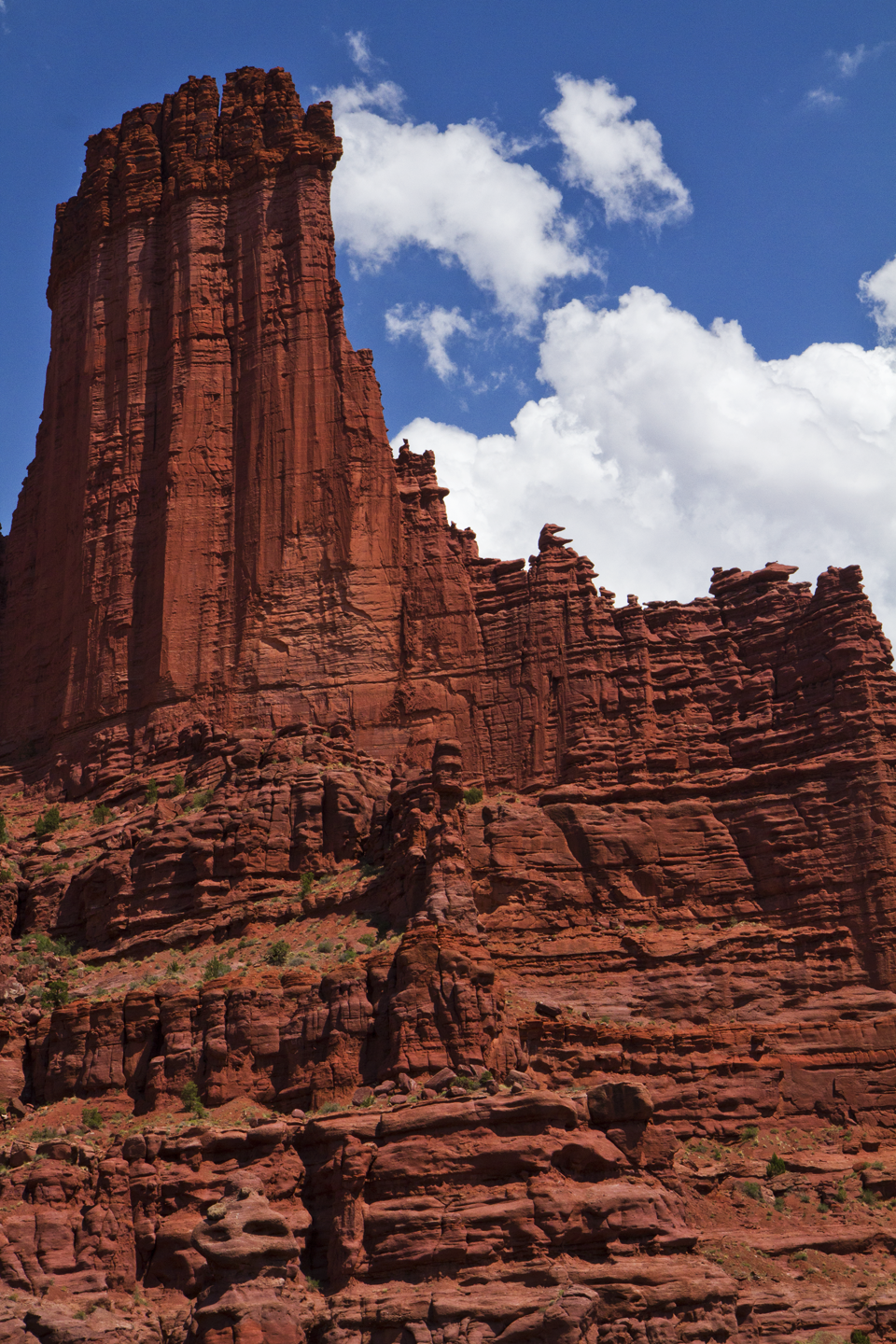 To me, this drive was reminiscent of the one we took through Gila National Forest en route to Truth or Consequences, NM. Similarity: gas saga.

I feel like I’ve mentioned this before, but Travis tends be lazy about filling up the gas tank. There’s been a couple of occasions where we’ve been limited by the empty light in the car. One was notably Hawaii volcanoes, where I wanted the option of a sunset wandering but we had no gas and the local stations were closed or broken. Maybe he plans this so I can’t get him up at sunrise…. Hmmmmm….

Despite our tank hovering more on the empty side (but the light was not on!, he says) he decided to calculate a scenic route through the Moab area that would put us near a gas station before the gas ran out.

We took the winding drive of the La Sal Mountain loop. I took some photos, and all the while I wondered about the gas. He reassured me it would be okay, but I was uncertain — I think because I’ve run this same car out of gas on two separate occasions. 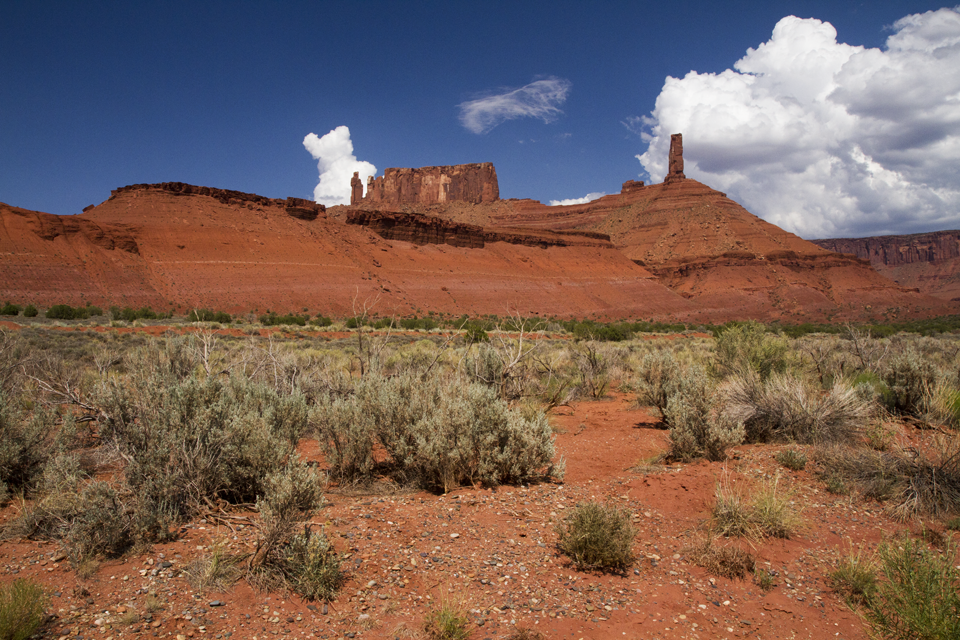 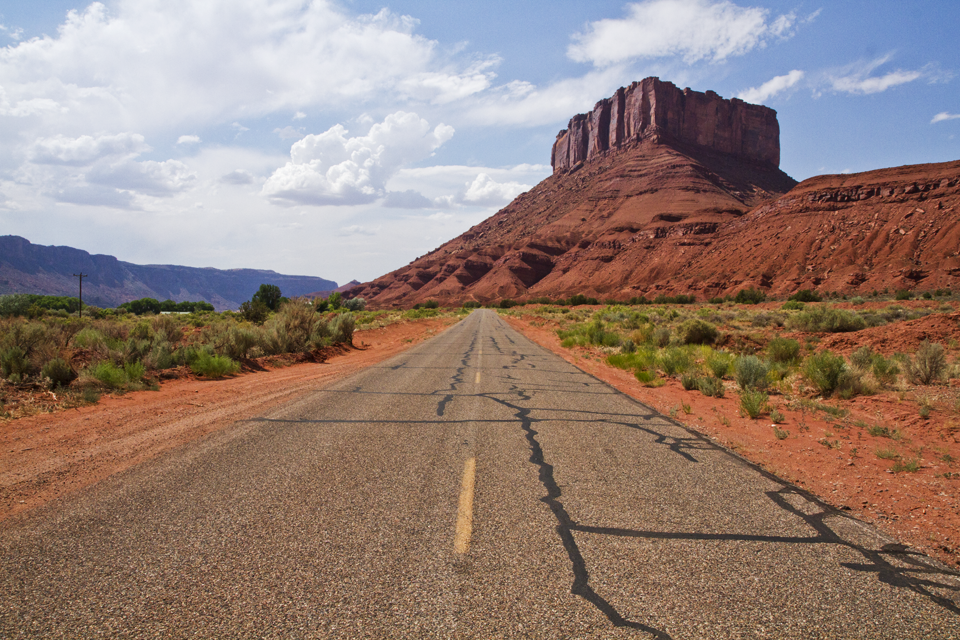 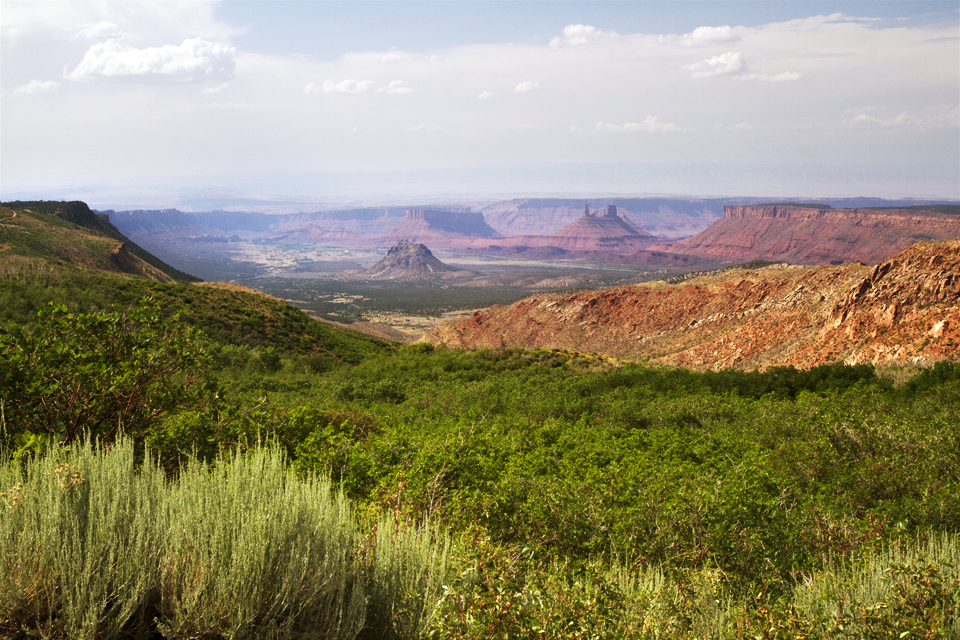 We eventually arrived in Moab, and the gas situation wasn’t as bad as I thought (meh). I’ll still point out the times I wanted to go somewhere and couldn’t because of gas.

Oh, by the way, the La Sal Mountain route was really nice, although it was extremely hazy while we were there.

We decided to enjoy the view of “Utah’s Grand Canyon” — it was a glorious view, even if we weren’t there at the right time of day. 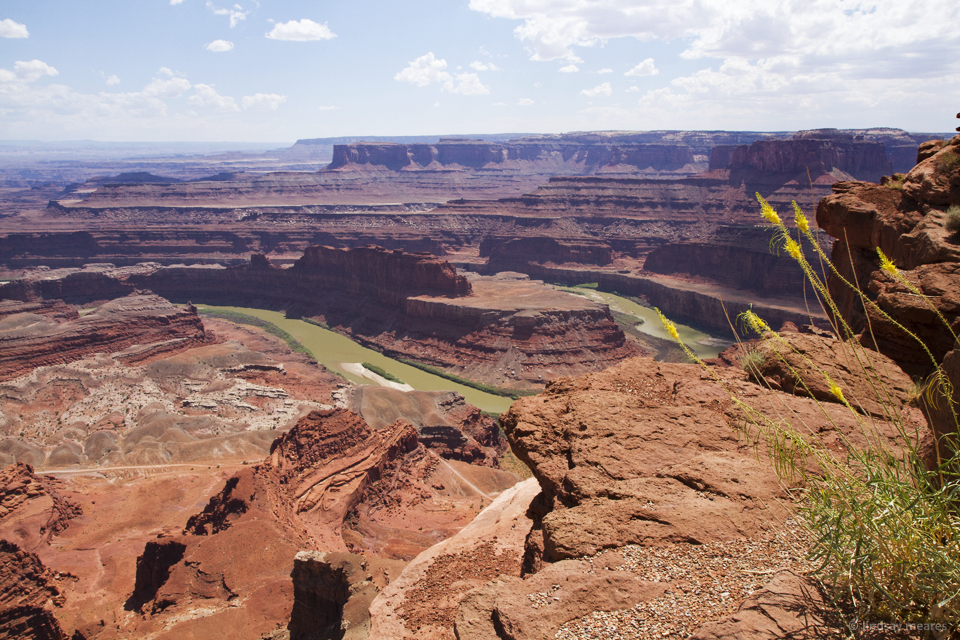 In the photo below the bright blue sections are solar evaporation ponds for Intrepid Potash, Inc. It’s basically a salt harvesting area. 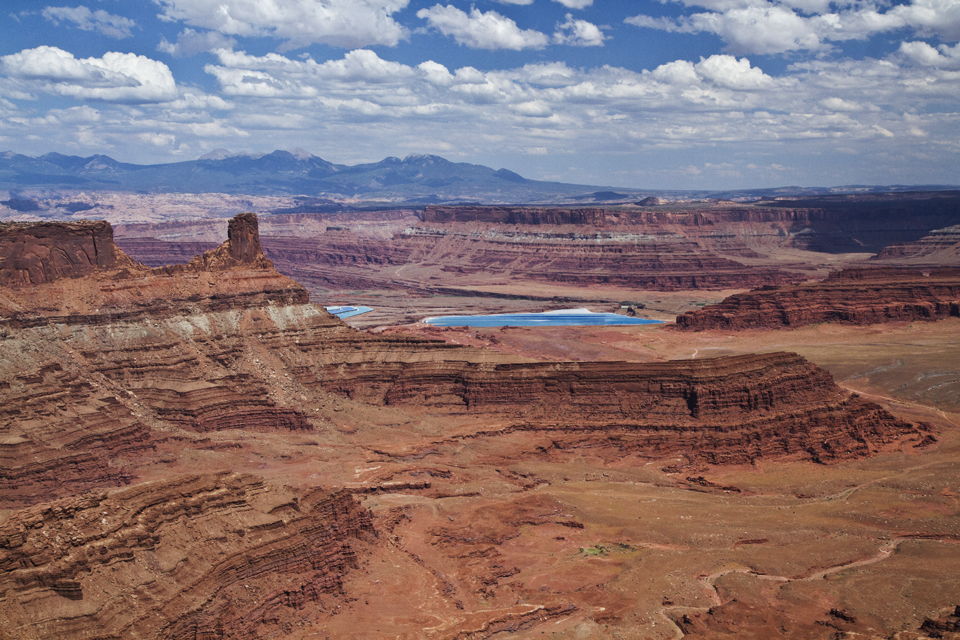 And that’s it for our side-tours in Moab. We spent most of our time in Arches National Park, and we didn’t touch Canyonlands at all despite it being relatively close. We’ll have to revisit the area some day to explore Canyonlands and perhaps get some shots in Arches in other seasons.