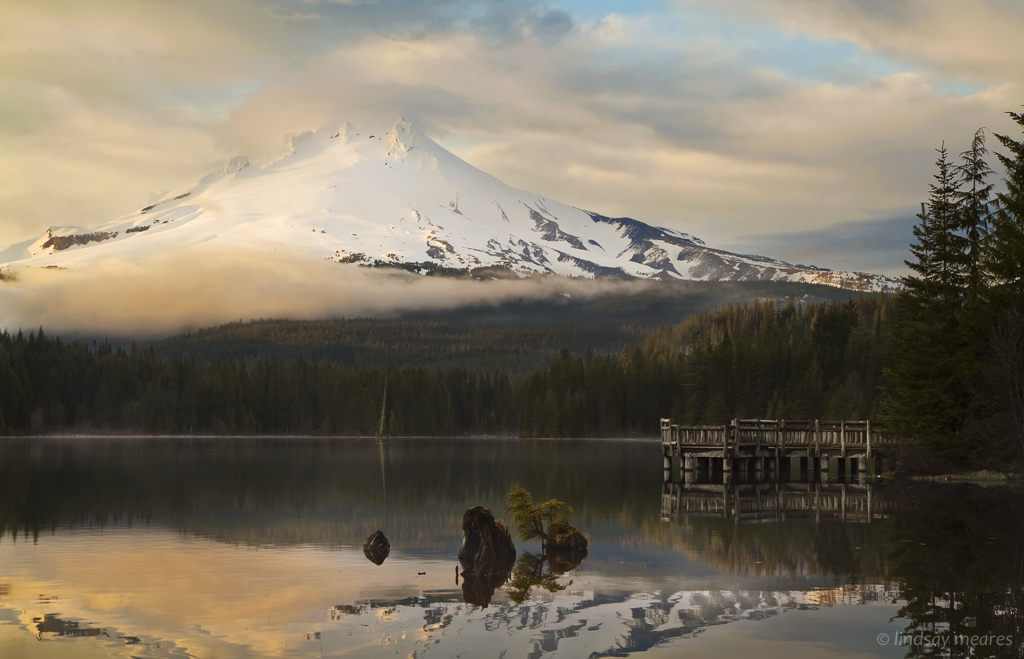 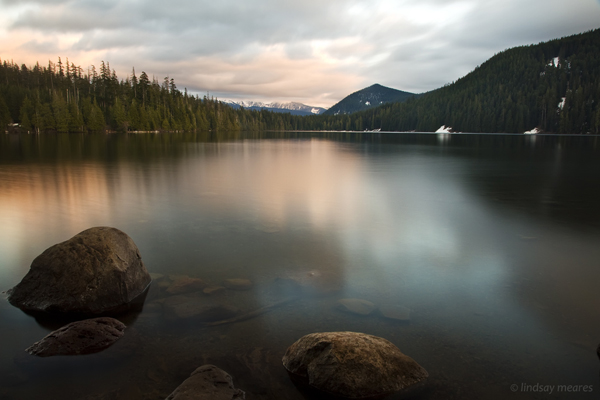 View of Mt. Hood — for most of the weekend.
It’s the one in the middle. Oh, you can’t see it? Neither could we. 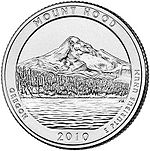 Ordinarily rain isn’t a bad thing. I’ve found some of the best lighting and clouds come as a storm clears. The issue is, tall mountains tend to be the first thing to be obscured by storm clouds, and one of the last things to clear. 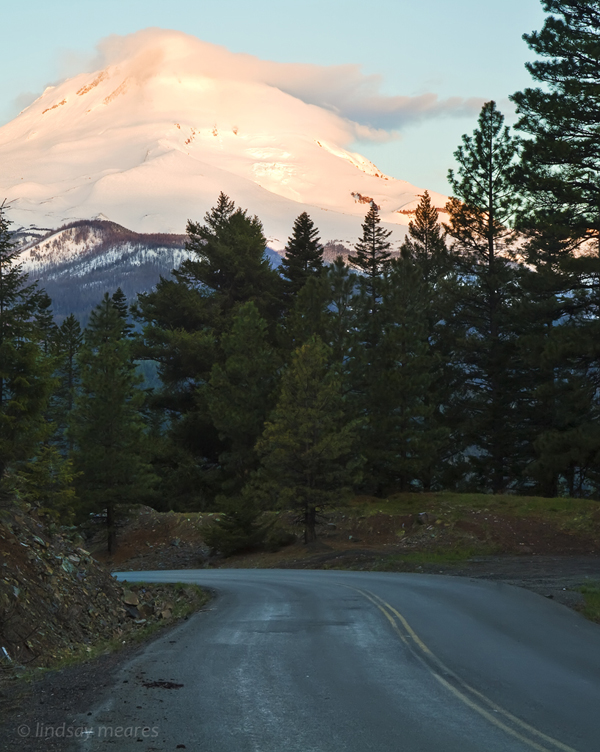 On the way out we decided to scope out some lakes… We didn’t actually find anything spectacular for future (nonexistent) sunrises, but we did find a few early morning vantage points of Mt. Hood while was visible (it then hid behind the clouds for the next two days). 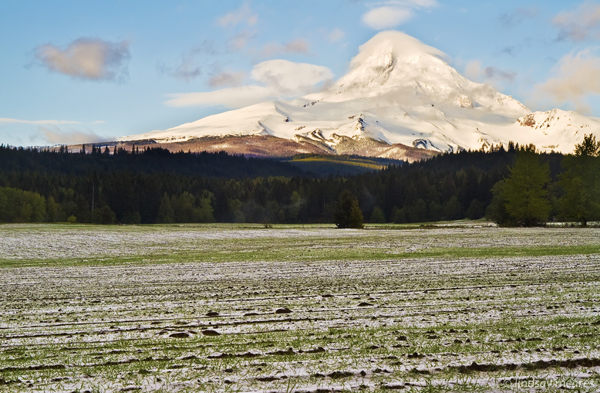 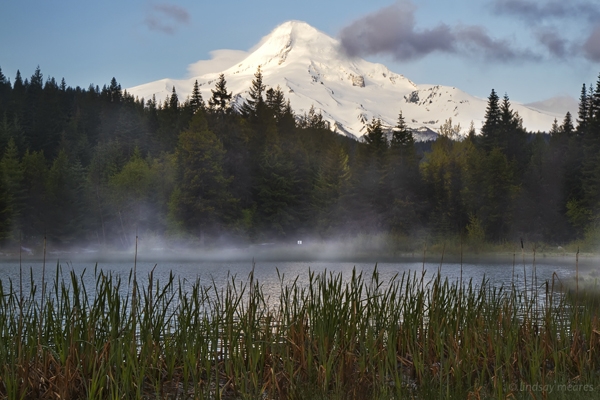 After that morning, we spent most of our time visiting the waterfalls of the Columbia River Gorge over and over waiting for the weather to clear. We hit up our Oregon winery (another random goal through our travels) and toured the town of Boring, Oregon. We drove around in circles for many more hours, and then supplemented it with many naps.

Our final night at Mt. Hood we were again driving around the mountain crossing fingers for a glimpse of Mt. Hood. We decided to check out Trillium Lake and to see if the view would be good if it were to ever clear up.

We arrived at Trillium Lake, and although it wasn’t entirely promising I could see a few patches of blue skies and the bottom third of the mountain. I decided to break out my Nook while Travis listened to podcasts in the car, and I sat on the edge of the lake staring at the mountain/clouds willing it to clear. 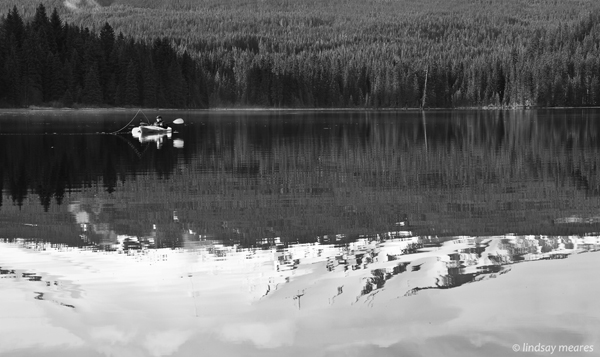 I spent several hours there, hoping the clouds would clear while watching some kids try to fish sticks out of the water. The skies slowly cleared, but the tip of the mountain was still covered by some very determined cloud coverage. 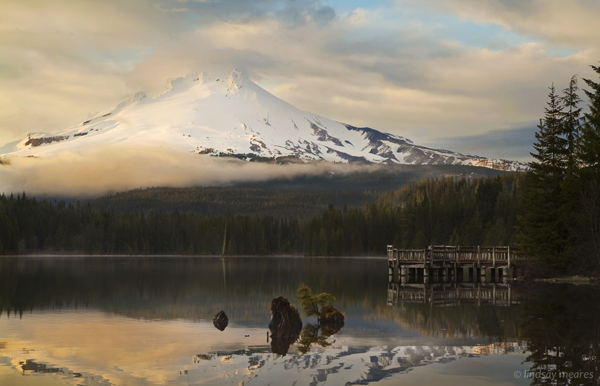 Finally, just 20 minutes before sunset, the mountain finally cleared. I got my pre-sunset shots just before the clouds rolled back in and covered up the entire mountain. I decided to call it so we could go get some dinner, but as I tried to leave we ran into a local photographer who said the clouds could come and go at will, and that we should stay just in case.

I was fairly skeptical as I had waited the past 3 hours just to see the mountain for a whopping 15 minutes, so I wasn’t too convinced it’d come back for sunset. However, we struck up a conversation, and in the end we were guilted into staying. Luckily we did, because although it wasn’t a spectacularly colored sunset, Mt. Hood did decide to come out and play. 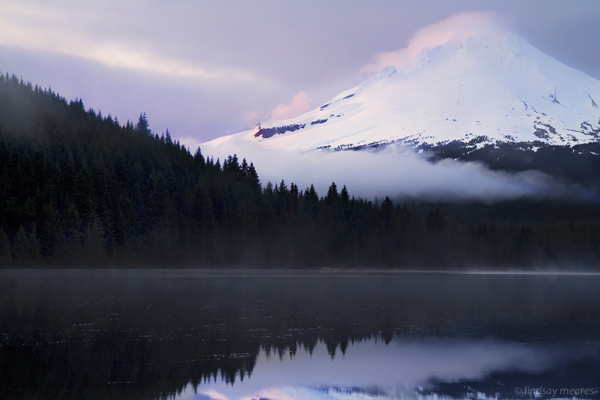 And now we are 5/5 on 2010 National Parks! Time to start thinking about the 2011 and 2012 quarters. So far we are 1/5 on 2011 (Glacier National Park in Montana), and 0/5 on 2012 (although we do have Denali National Park in Alaska on deck for August). No worries though, Oklahoma and Mississippi’s parks are only a weekend drive away, and we’ll start planning out the rest. 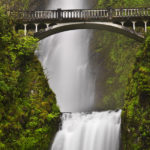 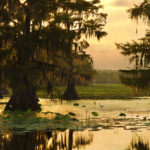