After completing our initial visits of the 2010 parks, we had planned to commence a furious catch-up on 2011 and 2012 parks. We had a 10-day trip to Alaska (including Denali National Park) planned for August 2011, and a variety of mini trips to think about including short driving trips to nearby Vicksburg in Mississippi and Chickasaw in Oklahoma. However, things don’t always work out the way you plan…

At the end of July I decided to fully commit to living in Texas and part ways with my California job that I worked at remotely since we moved in January. We decided I would take this new-found freedom to pursue landscape photography and work on our travel ambitions while eventually looking for a new job in the area. Of course, I got a job offer for the only job I applied to during my final 2 weeks at the old job, so as it turned out I ended up starting a new job the weekend after leaving the old one without any downtime. This was great because it was an amazing job opportunity; however, we had to postpone our trip to Alaska, and we didn’t have time to visit another one of our National Parks coins until October.

Anyway, without further ado, we took a trip up to Washington in October 2011 to visit Olympic National Park, which was released as a coin in 2011. We flew in and out of Seattle-Tacoma but spent the entire duration of our trip in the Olympic Peninsula exploring the park. 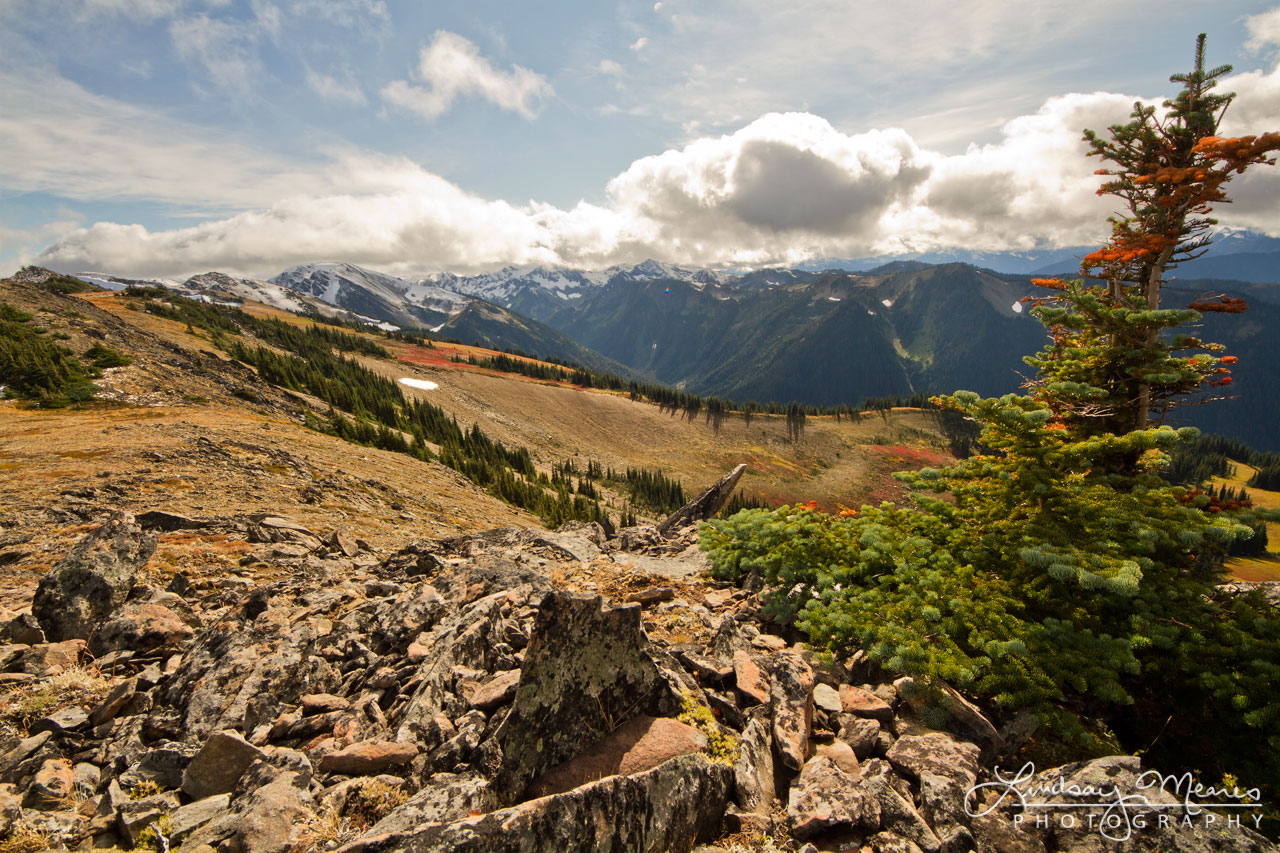 Olympic National Park really is “three parks in one” as they claim on the National Parks Service website. There is the mountainous part with the Olympic Mountains and Mount Olympus, there’s a forested region full of tree, rivers and lakes and then there’s the coastal region, stretching the western shores of the Olympic peninsula. The park has so many things to offer, and we visited as much as we could in the four days we spent there.

Our first stop was the mountainous region of Olympic National Park. We drove up to Hurricane Ridge and wandered around while waiting for the clouds to clear. 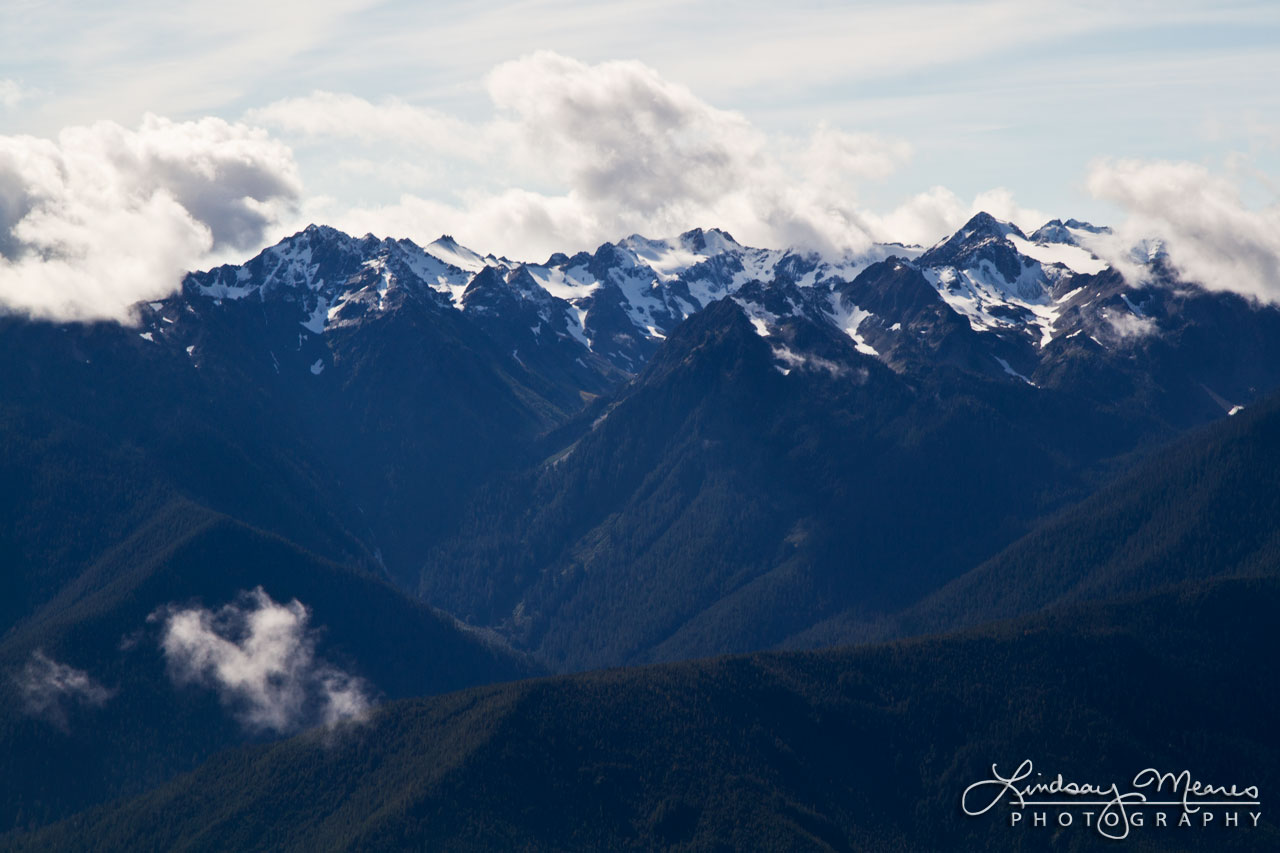 Some deer we found during the wandering process: 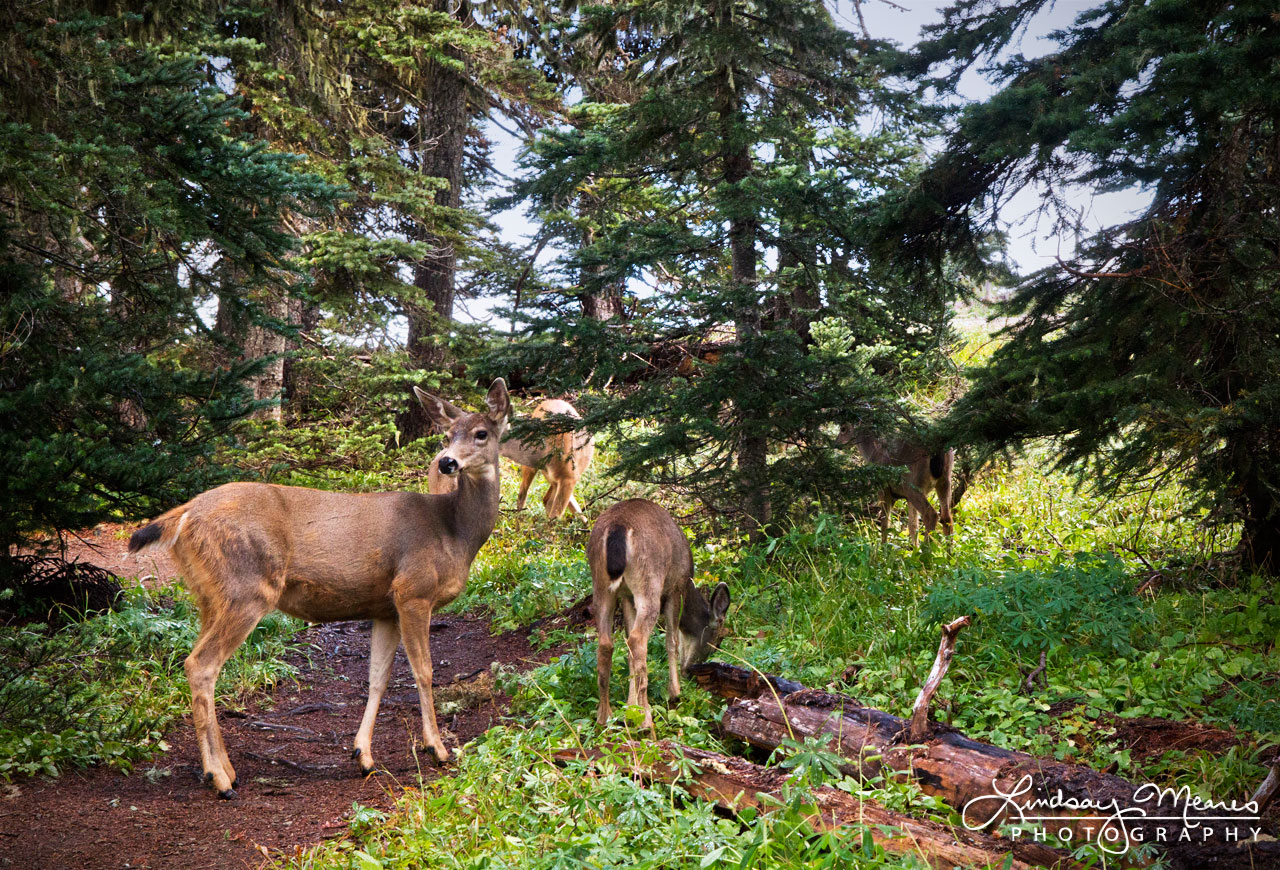 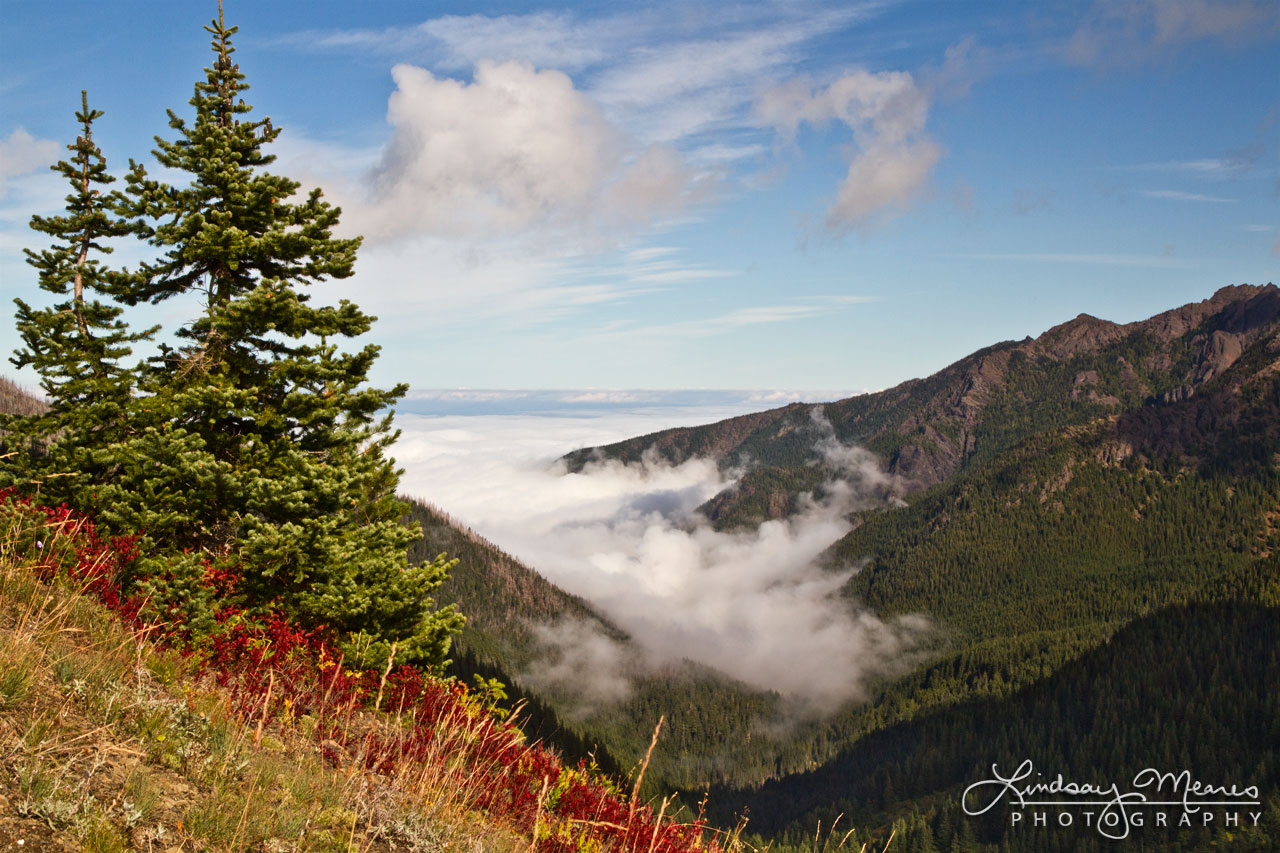 Then we drove to Obstruction Point and took photos of the mountains. I believe these are Elk Mountain and Maiden Peak. 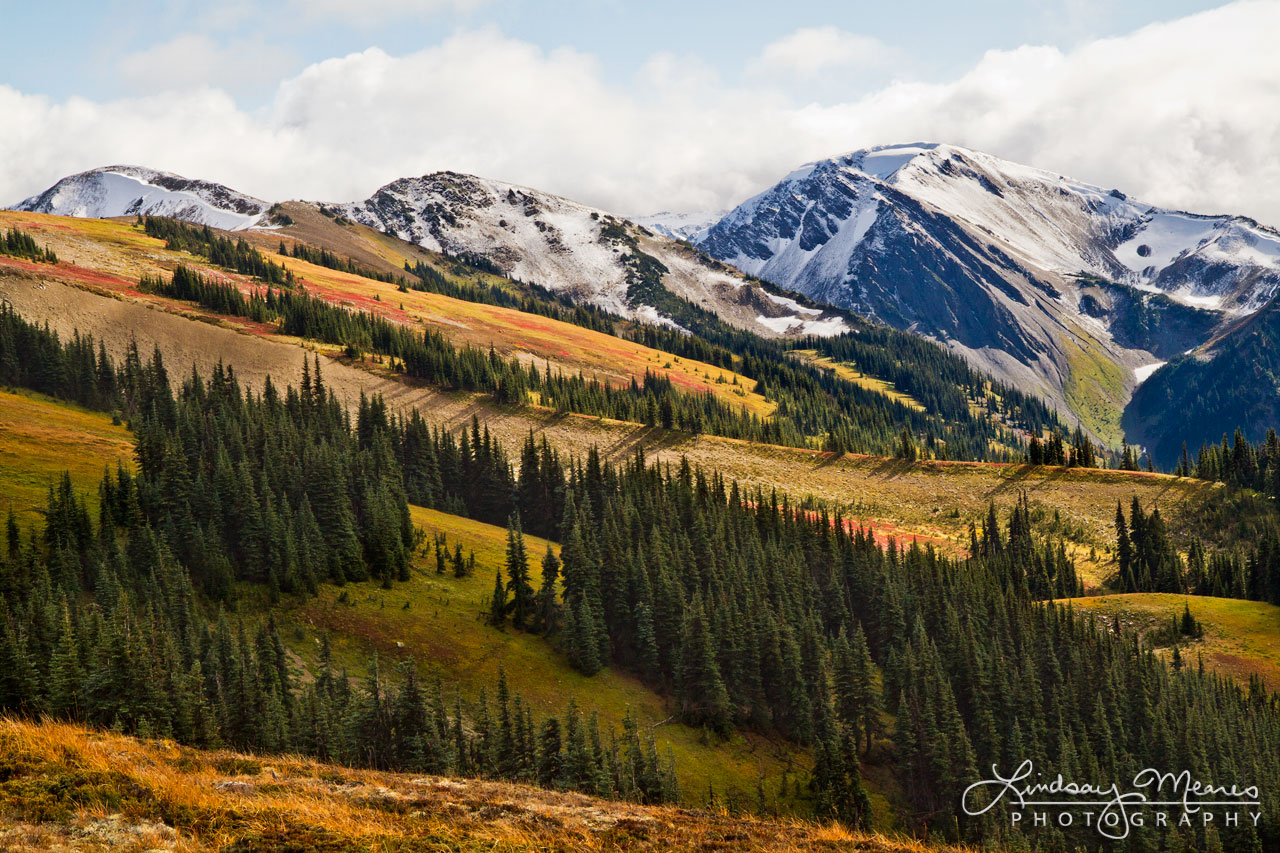 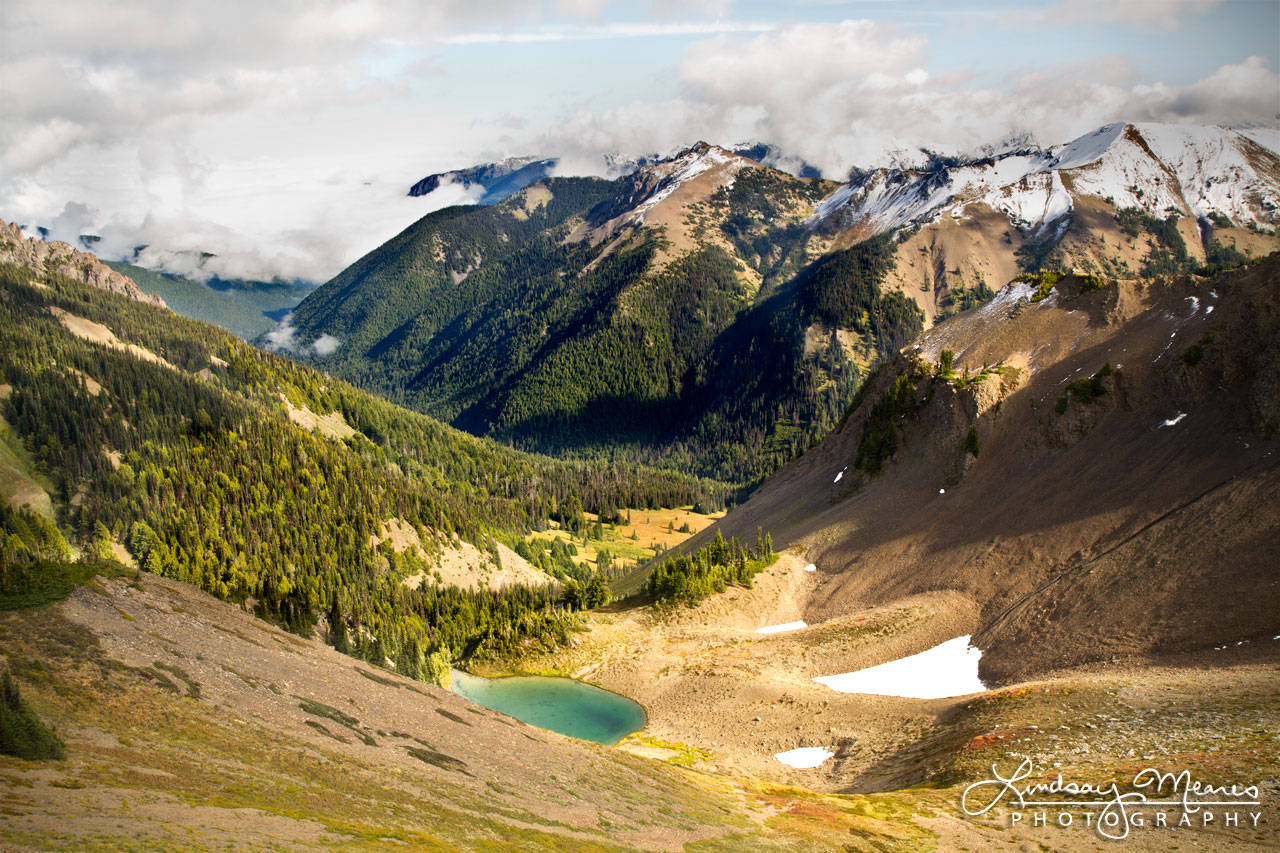 After spending the day touring the Olympic Mountain range we drove to the beach at Dungeness to take photos of sunset. We also stopped at a local winery, a random side trip we occasionally do when visiting different states. Anyway, Dungeness isn’t actually within the Olympic National Park, but I figured I’d include our favorite photo from there since it’s pretty much the only place we took photos on this trip that was not technically part of the park. Sunset was a little too cloudy, but we had a good time there until we got back to the car and I couldn’t find my driver’s license (which I had been carrying in my back pocket since the winery stop). 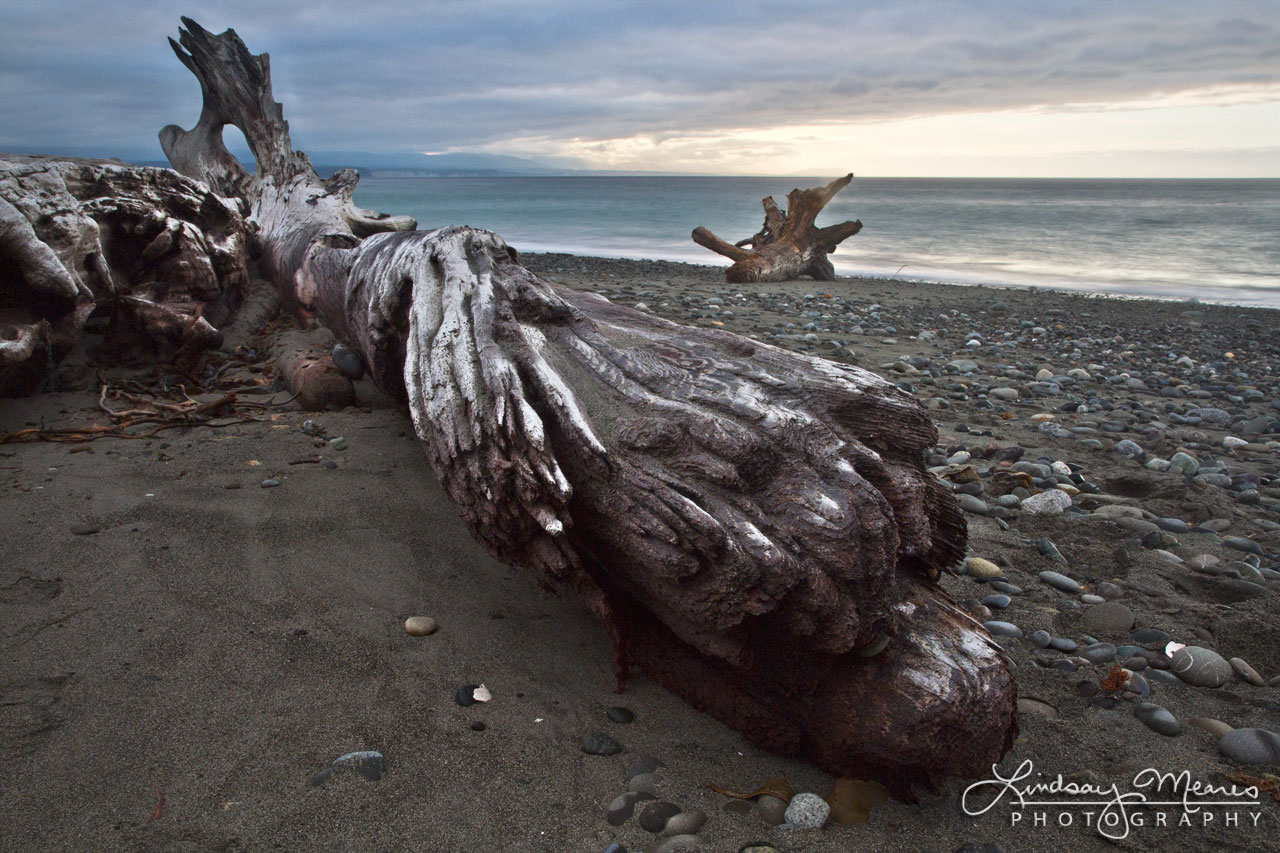 I ended up running all the way back down to the beach to retrace my steps and see if it had fallen out among the rocks. I was unsuccessful. We drove around to check some of the other scenic lookouts we’d visited (also with no success). I ended up spending the night in semi-panic trying to research how to through airport security without a license (as well as looking up the steps to replace a lost license).

In the morning we did the final thing we could do before we continued our loop around the park, we called the winery to see if I had lost it there… And they had it! Apparently it had fallen out of my pocket as I got into the car and someone found it in the parking lot. We were extremely grateful someone turned it in and we stopped to fetch it before merrily continuing onwards 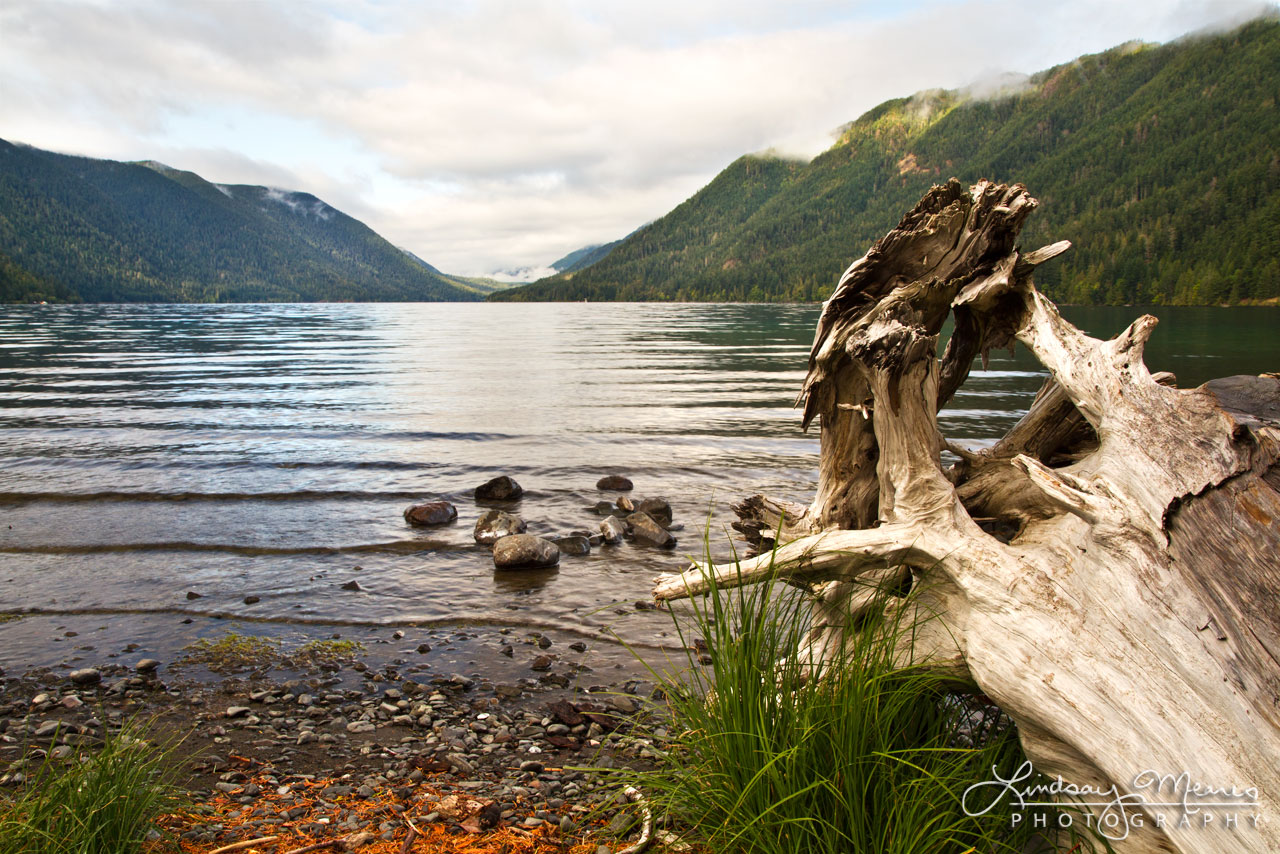 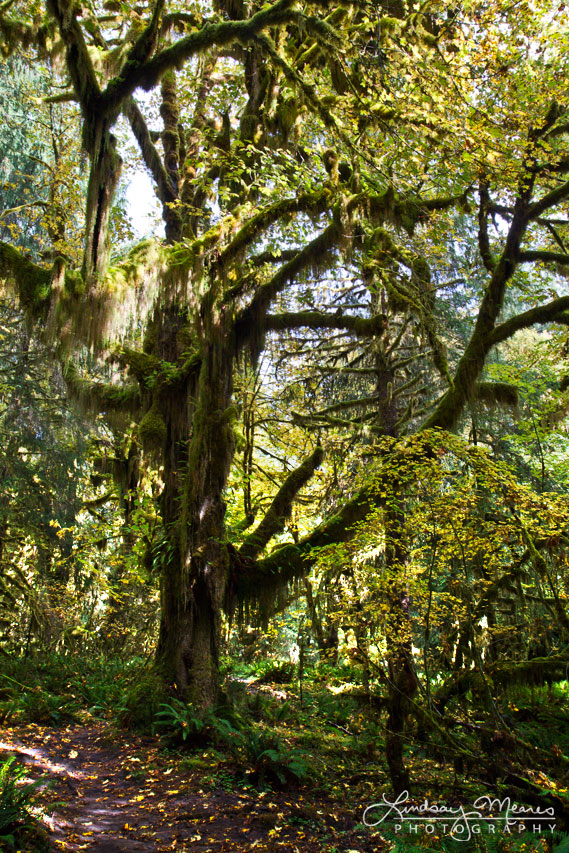 After leaving the northern park of the park we continued our westward loop around the park, stopped at the Hoh Rainforest. We didn’t spend too much time there, but we took a short hike. It was scenic.

After our rainforest jaunt we drove to the beach for sunset. We initially scouted First Beach at La Push, but then decided we’d trek down to Second Beach for sunset. The sea stacks were beautiful in the late afternoon light, and the tide was right to find some brightly colored starfish while we watched the sunset. 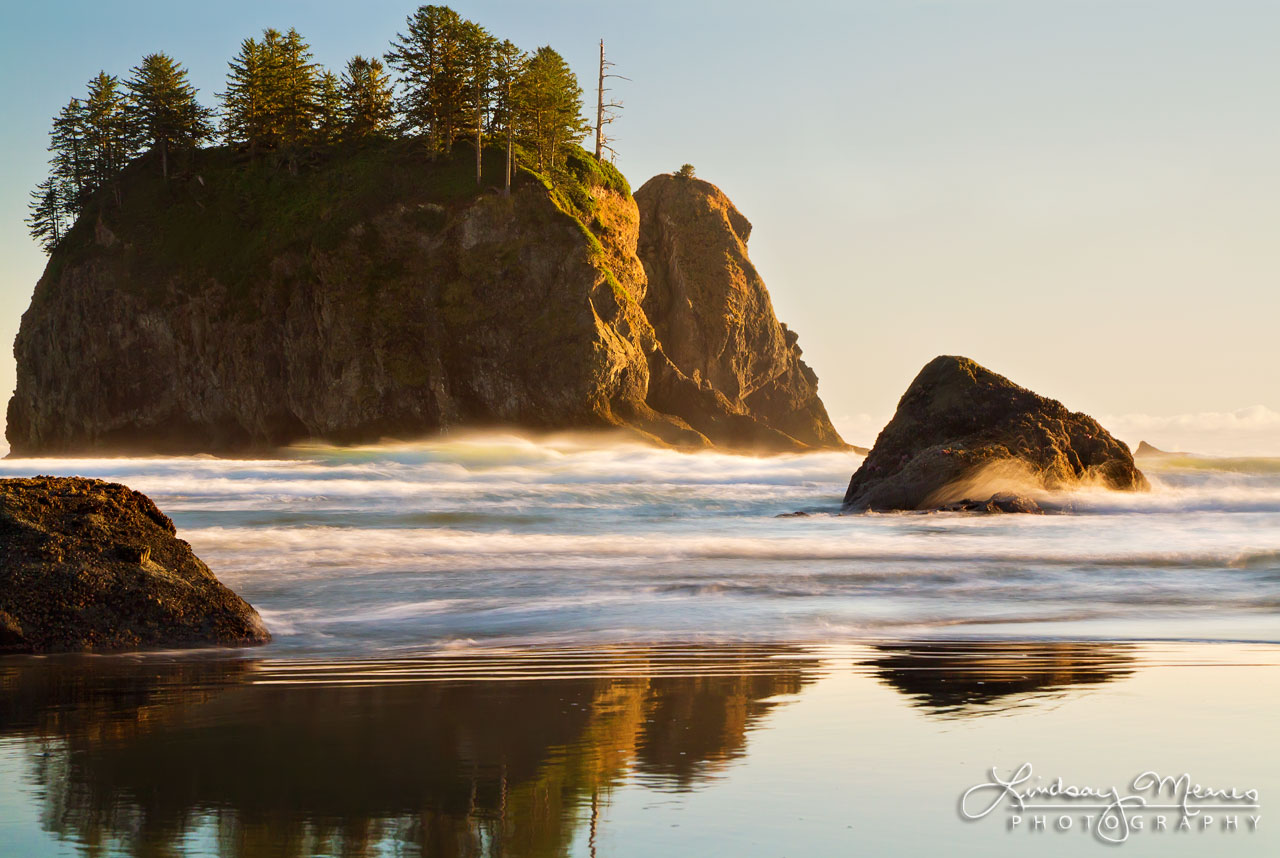 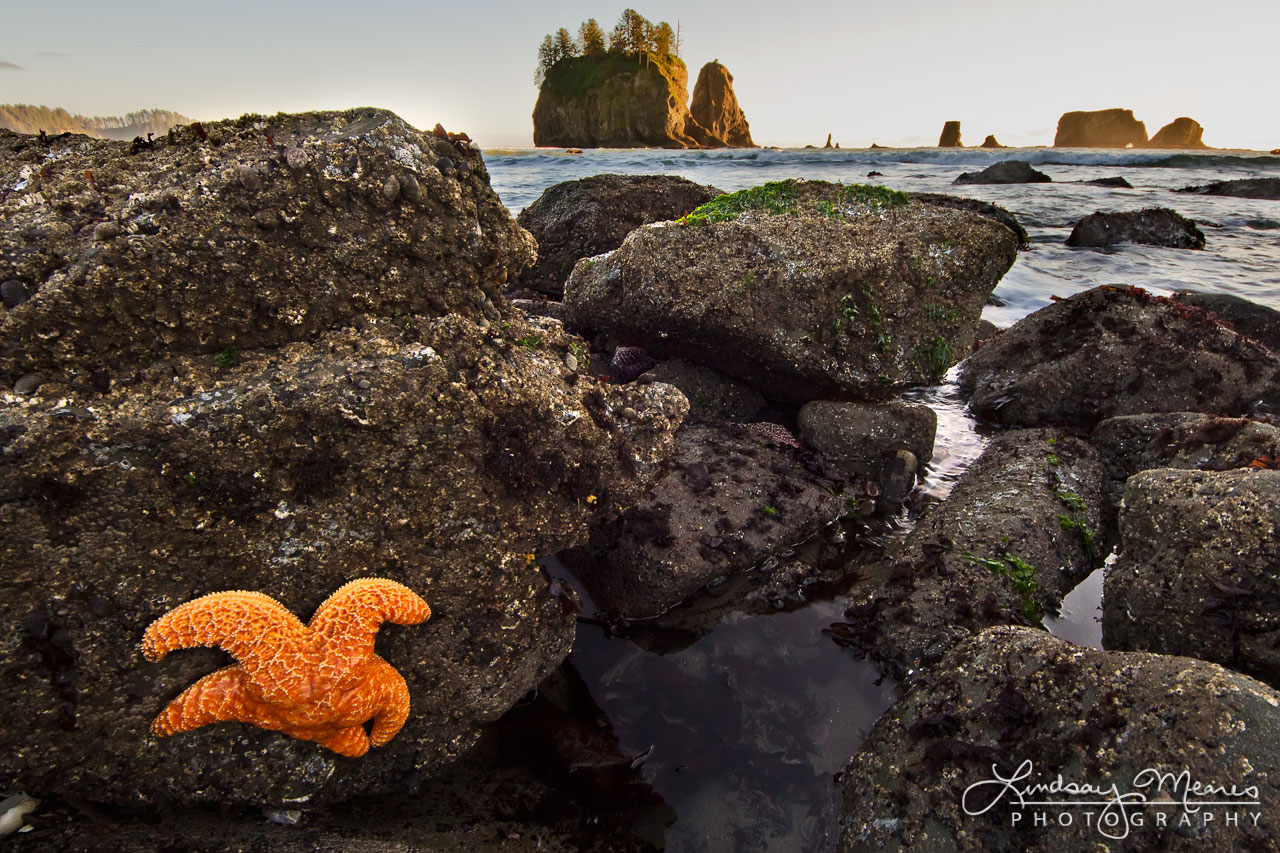 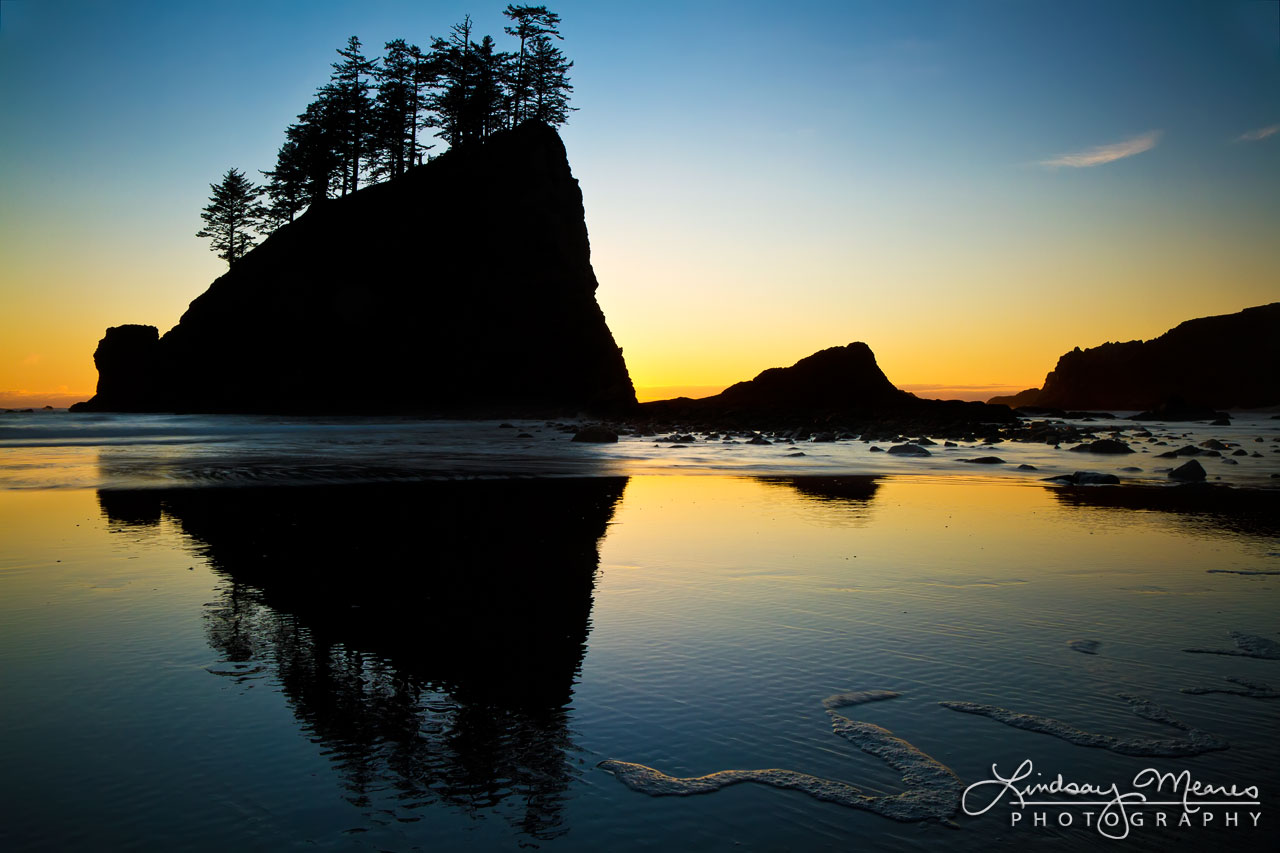 Seastack Silhouette – One of my favorite photos of the trip 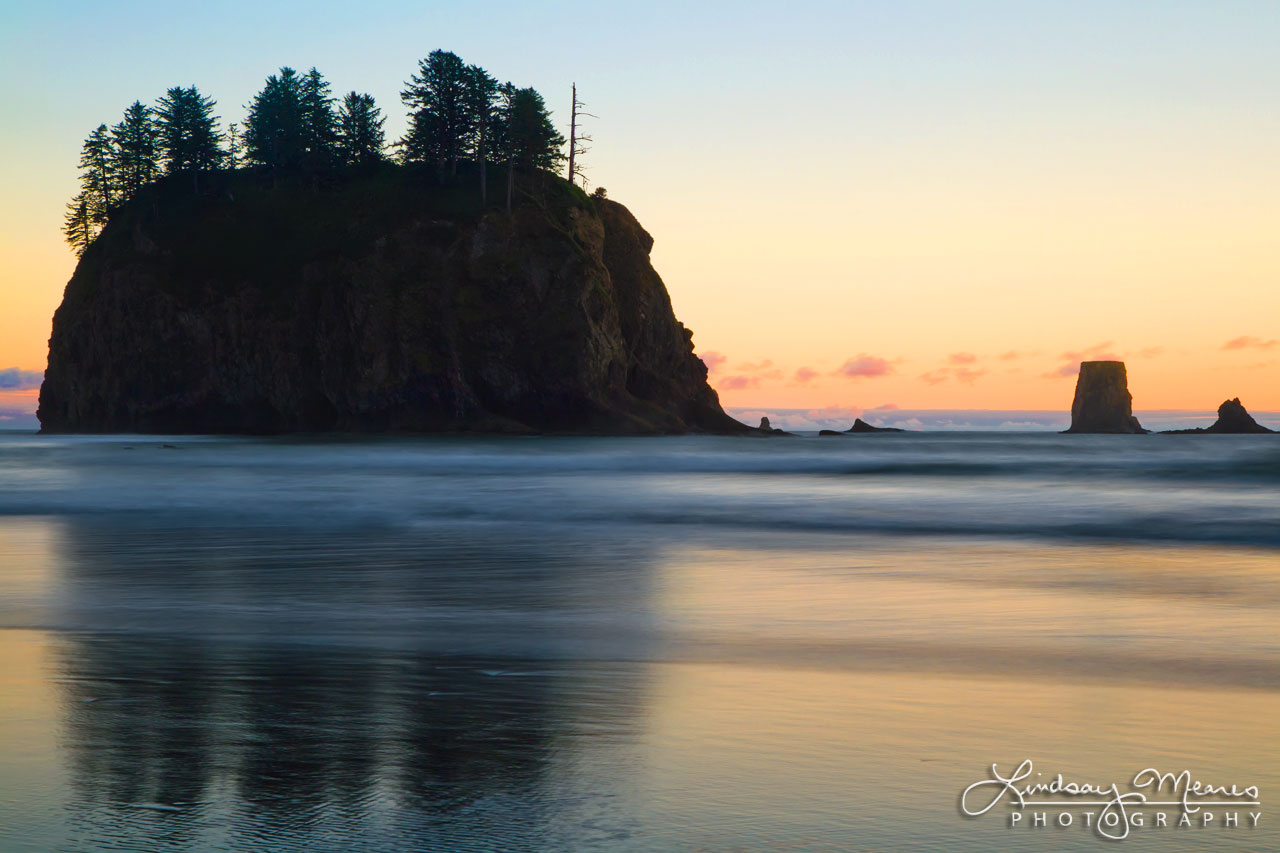 The next morning I woke up and explored the beaches outside our hotel in Kalaloch. It was one of those mornings where I was tired from all of our travel and was open to sleeping in, so in lieu of setting an actual alarm I left the curtains open so the light would (maybe) wake me. I wasn’t really expecting much since the forecast looked pretty cloudy and the sun rises in the east while the beaches face west.

Luckily, the light did wake me in the morning. I woke up to a beautiful, unearthly glow lighting the hotel room. I immediately jumped out of bed, grabbed the camera and sprinted down to the beach where I tried to salvage my laziness. 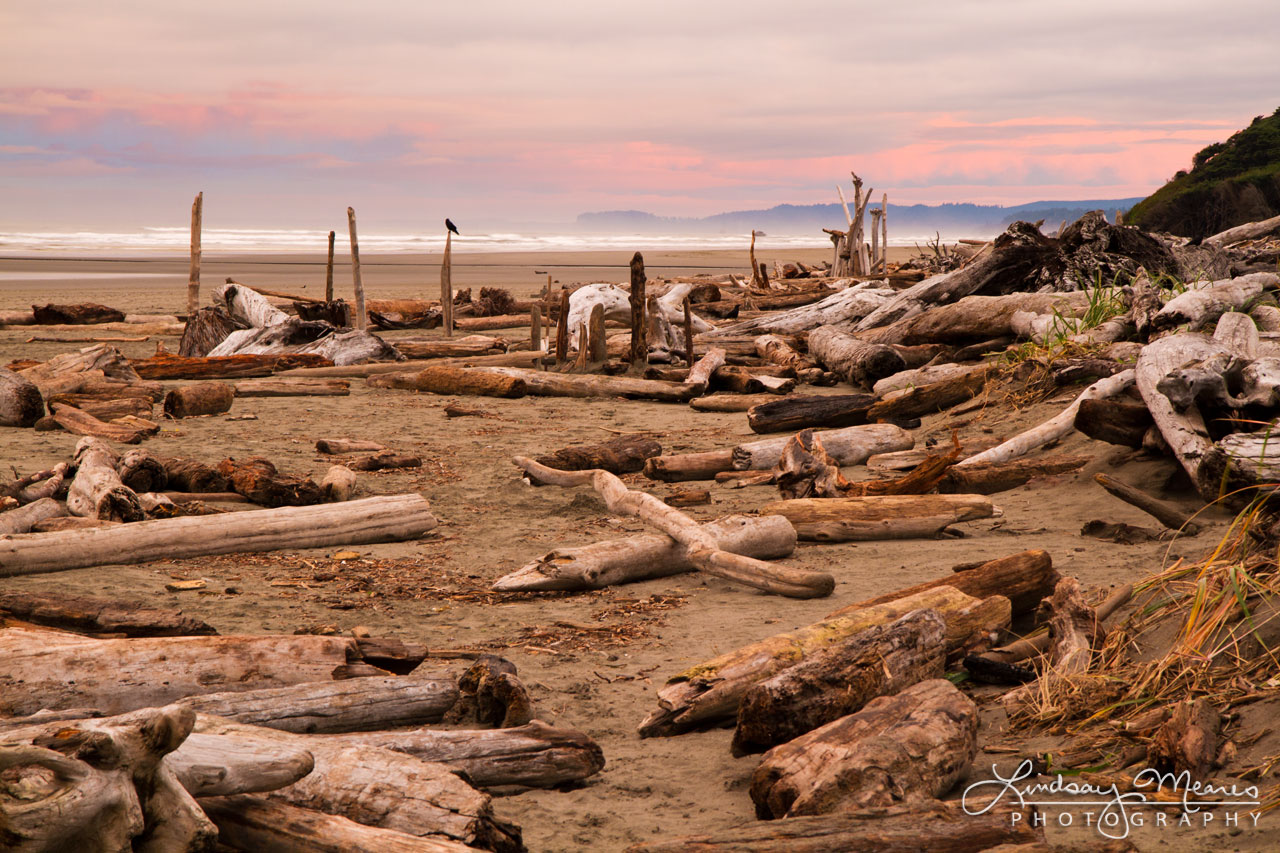 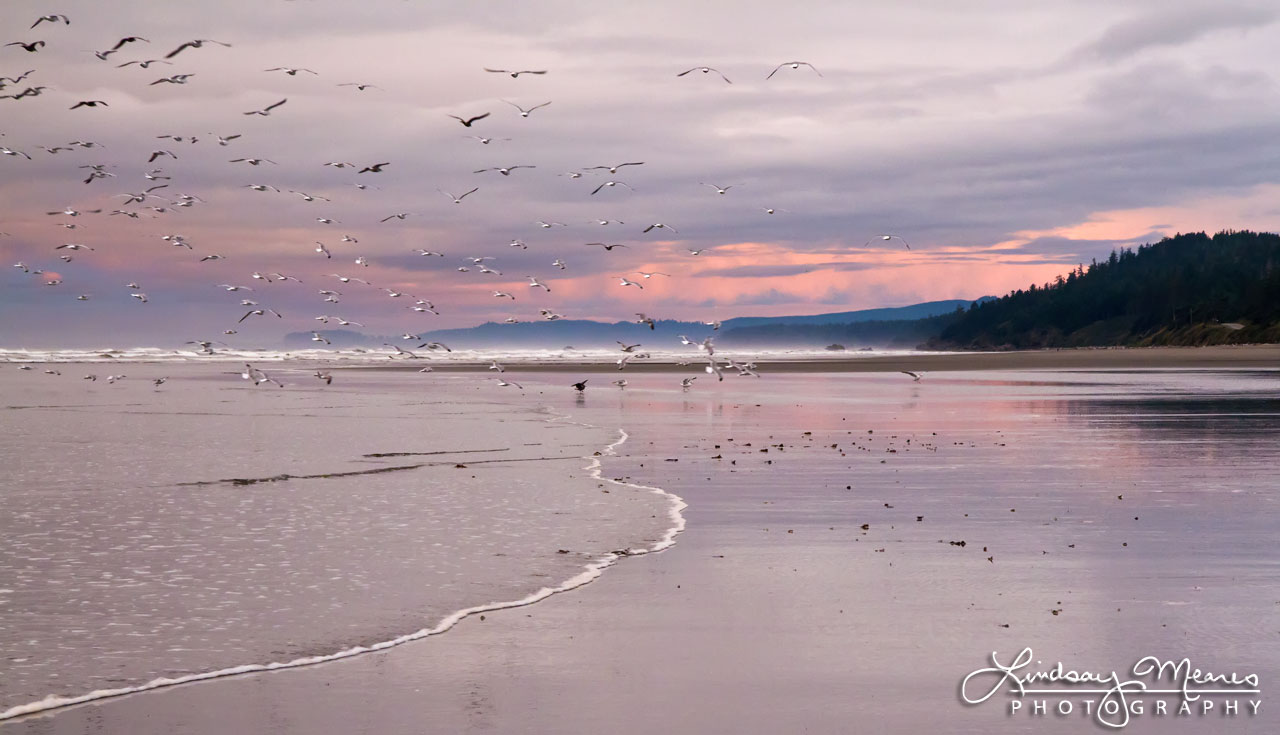 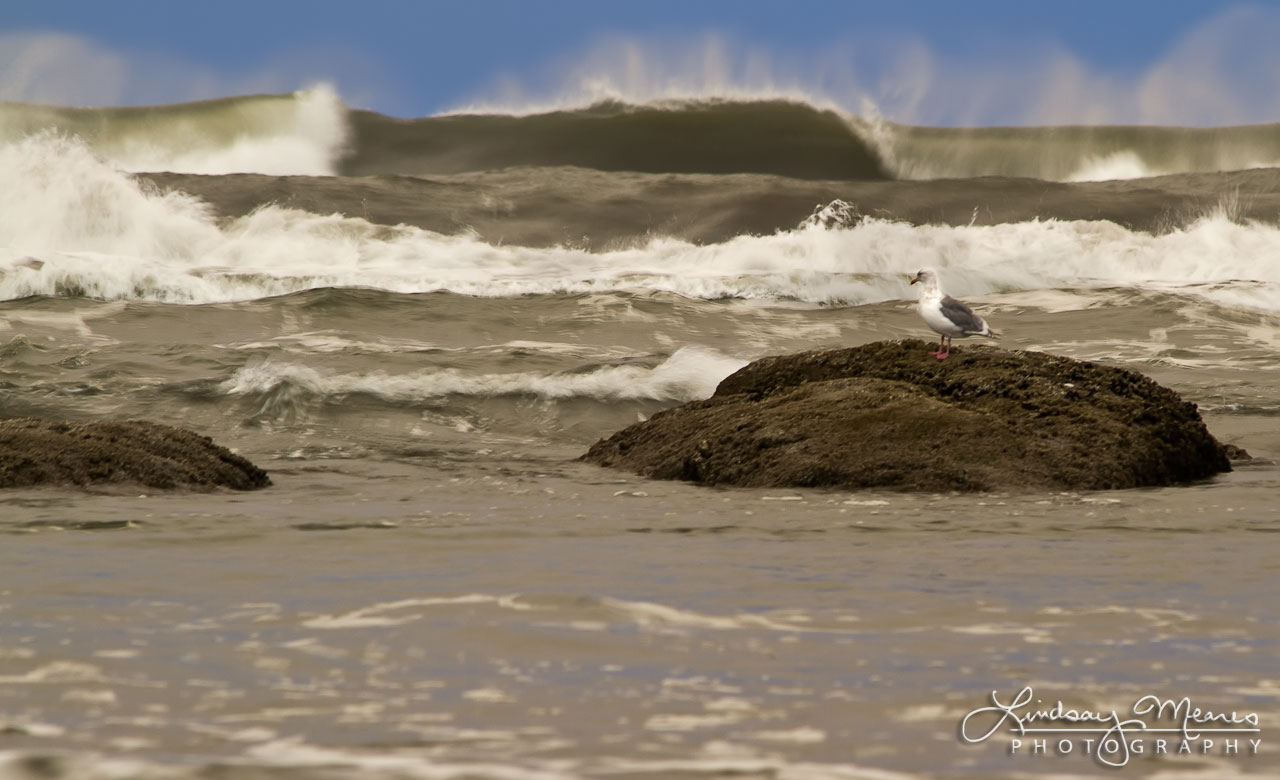 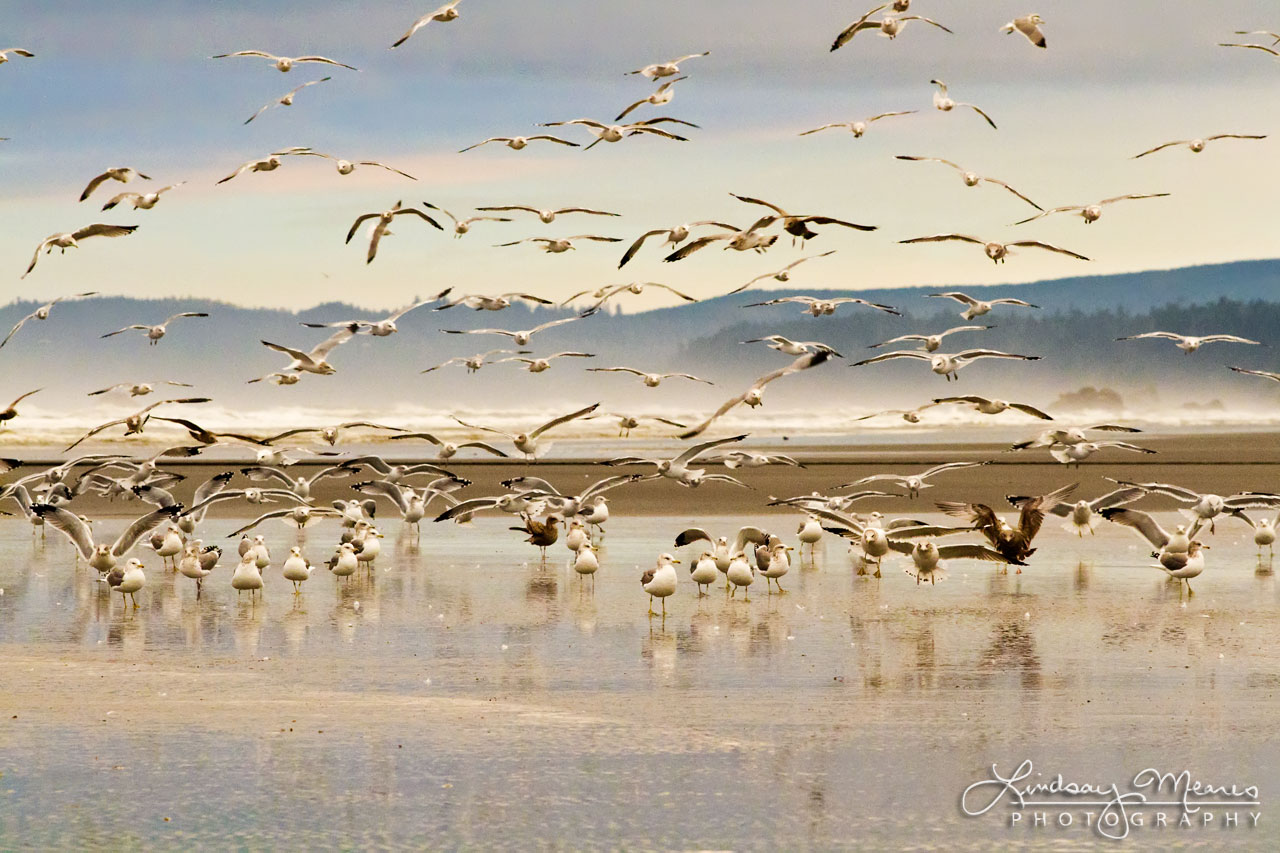 There were a lot of birds… And an otter! 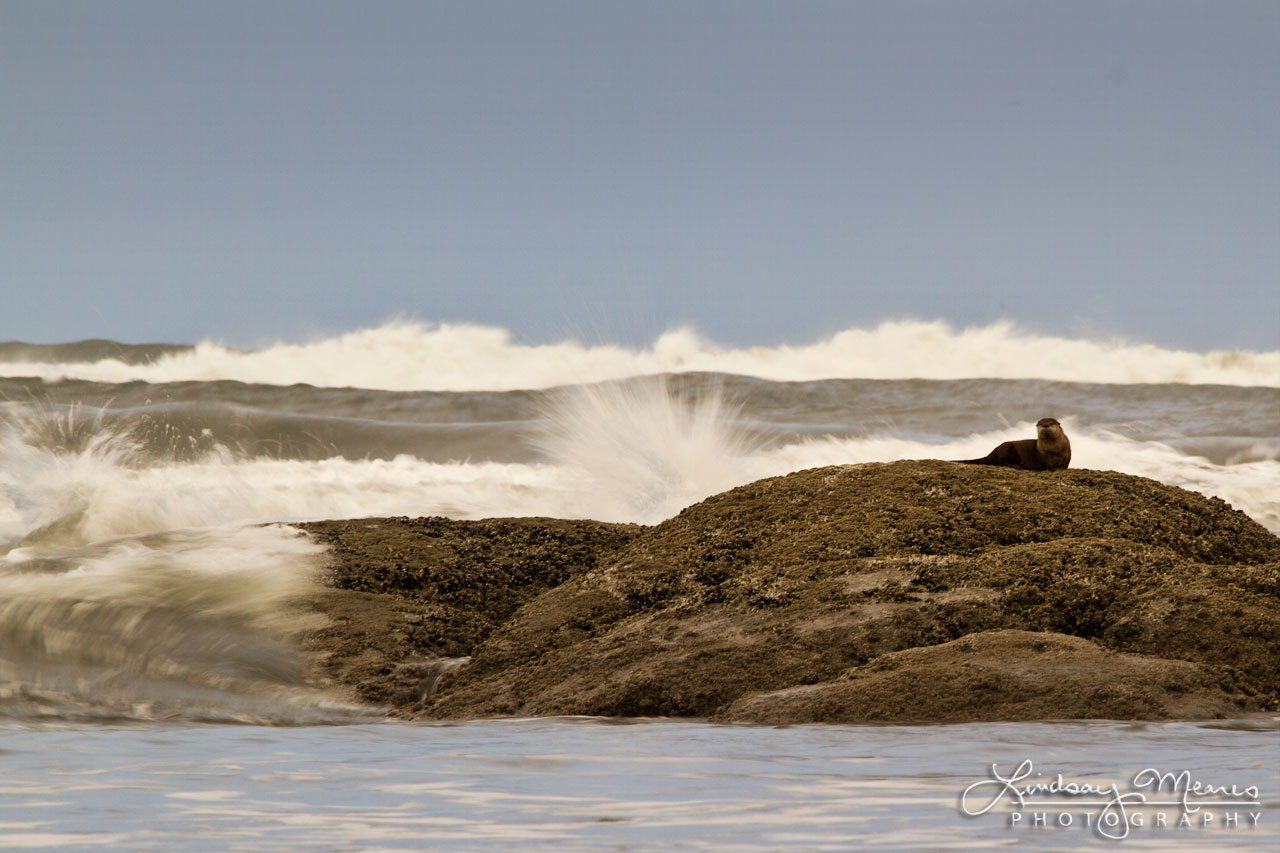 Later in the day we drove around Lake Quinault, stopping to take photos of Falls Creek near the lodge. The sun slipped behind the clouds just long enough to give us some smooth, even light for my waterfall quest. 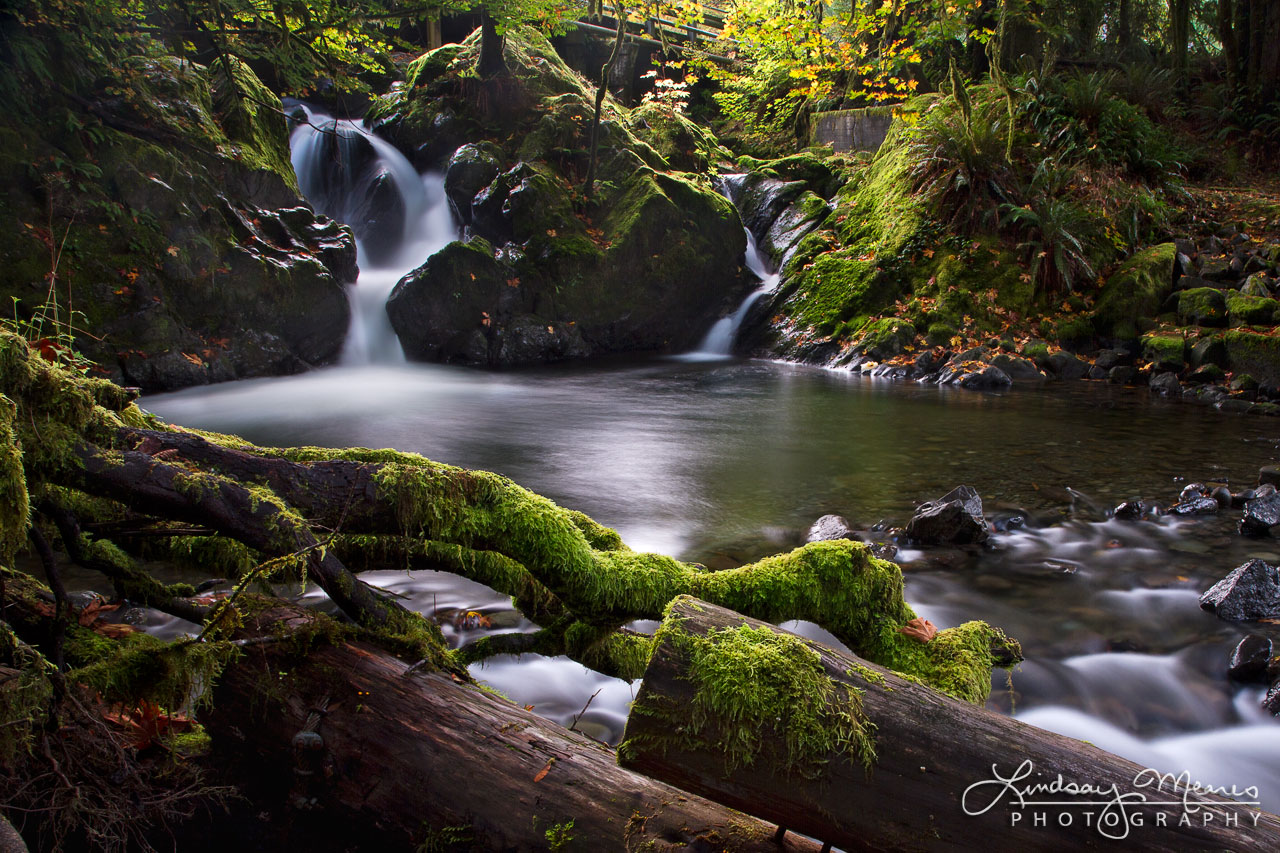 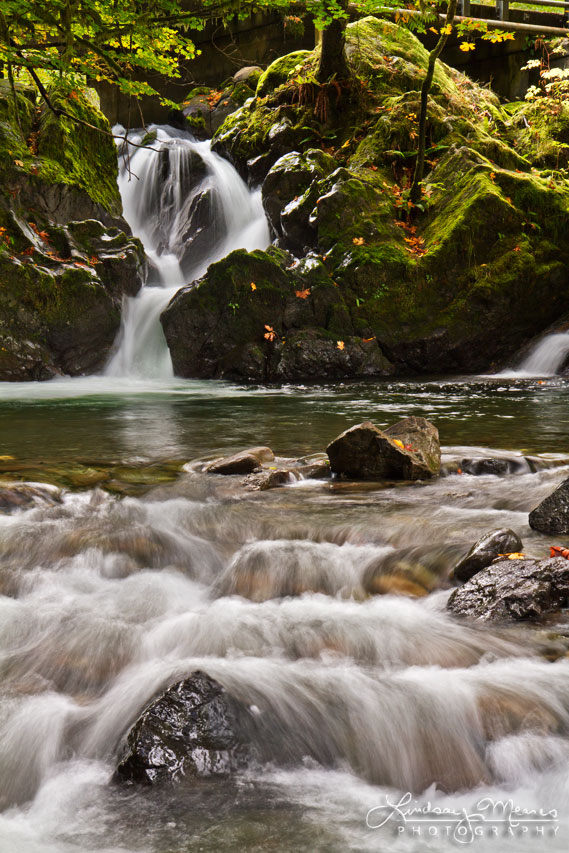 For our final sunset of the trip, we drove to Ruby Beach! It was foggy and overcast, but after being late to my sunrise I decided we were sticking around until we were absolutely certain there was no chance of a sunset. Ultimately we were disappointed, although I enjoyed taking “moody beach shots” while getting soaked. 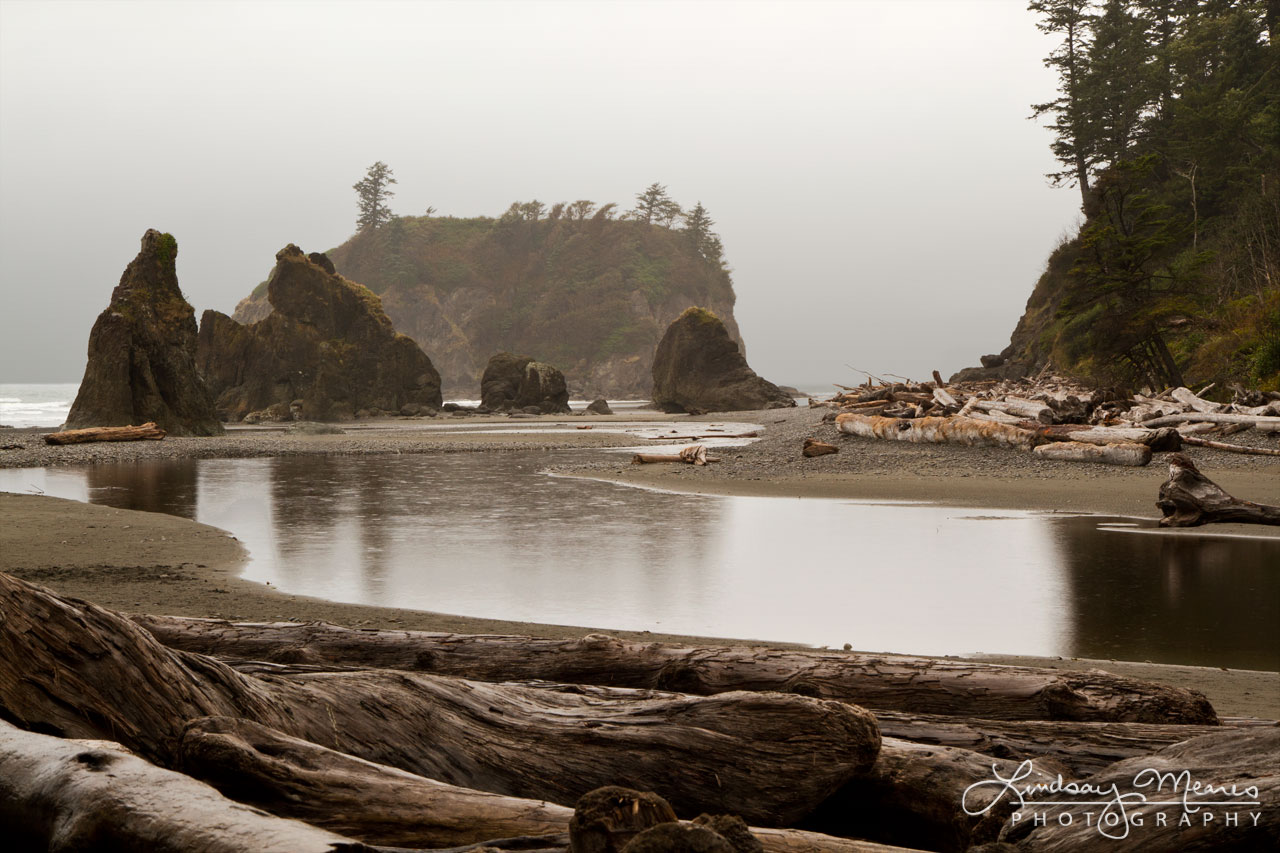 The next morning we decided to give Ruby Beach another shot, waking up early to head over there for our final sunrise of the trip. I thought it might go the way of the previous night (“moody beach shots”) but the but the sky turned a lovely shade of pink as some low fogged rolled in behind the sea stacks. 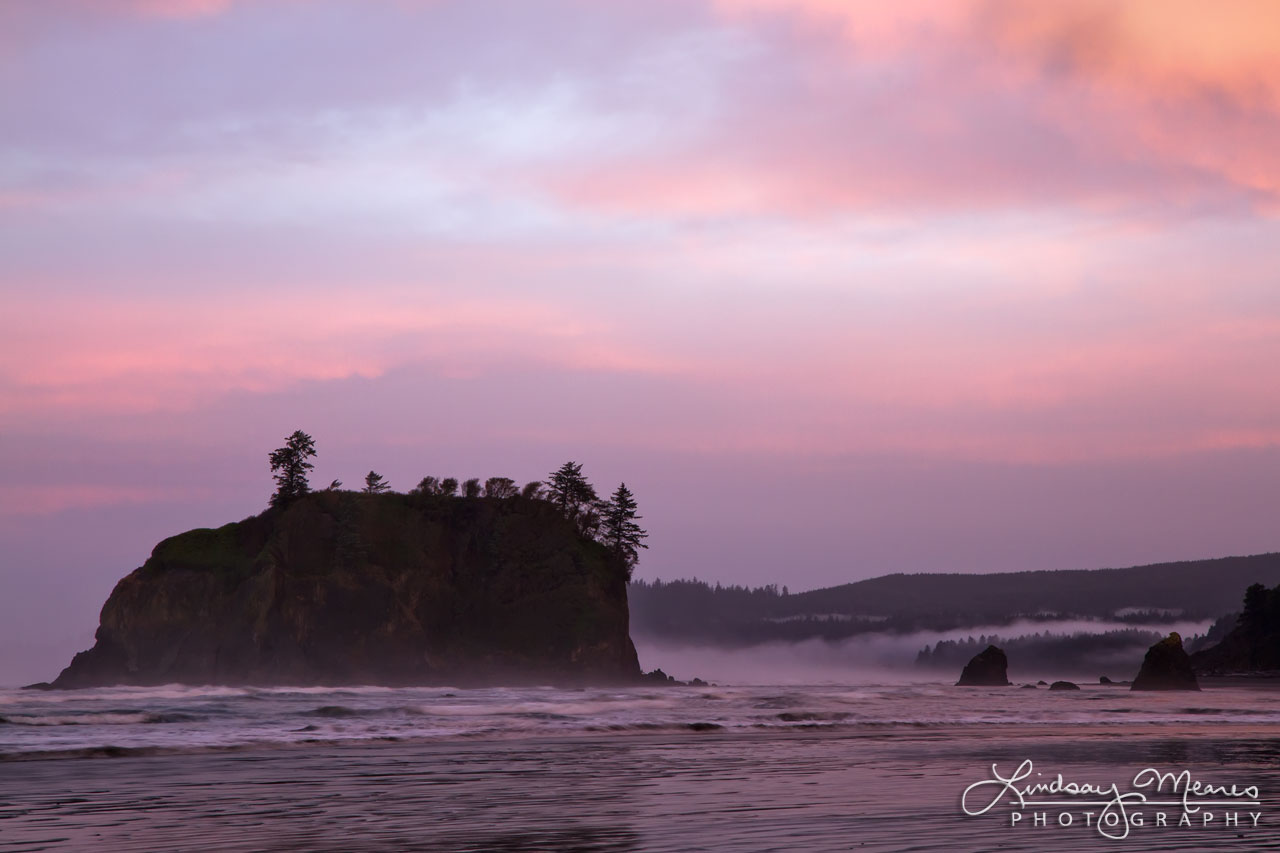 And looking back towards the sunrise… 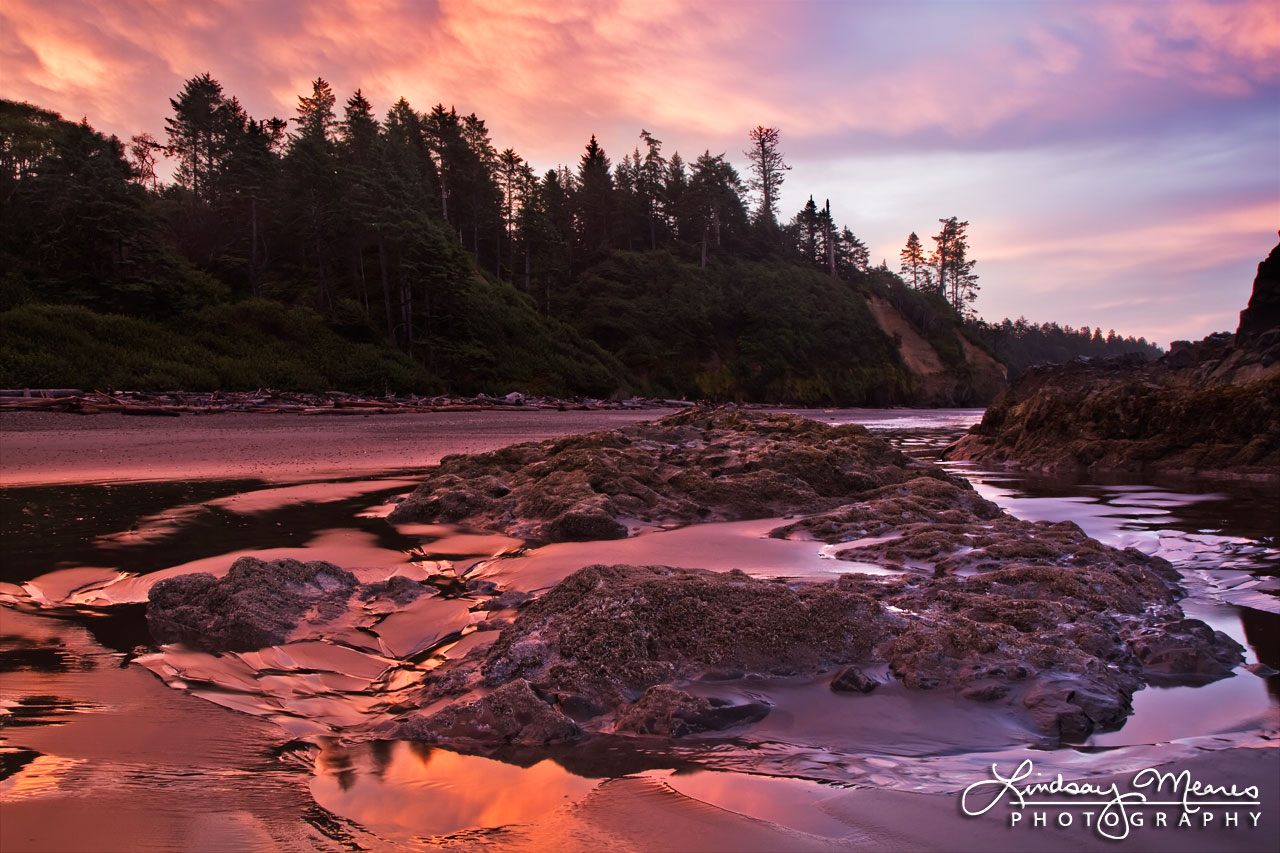 And that sums up our explorations of Olympic National Park. We are doing pretty poorly at our 2011/2012 parks, but hopefully we’ll visit more soon.