Now that our road trip is long in the past (with no immediate plans to drive around the country for 4 months) we’ve had to turn to other projects to satisfy our travel needs.

Our original thought was to visit all 50 states by 2015 — not such a difficult task considering we went to 37 on our road trip (although we’re still debating if some of them we drove through quickly like Illinois and Alabama count towards our goals).

However, after thinking it over we’ve decided that visiting all 50 states by 2015 wasn’t ambitious enough so we’ve decided to add a new twist. The U.S. Mint has decided to run an 11 year, 56 coin collection of America the Beautiful quarters featuring one National Park (or National Monument, Historic Site, etc) from each state and U.S. territory. We’ve decided our new goal is to visit each of these historic sites and take photographs to pair with the silver bullion America the Beautiful coins in (what will be) a very large wall art & collage collection. 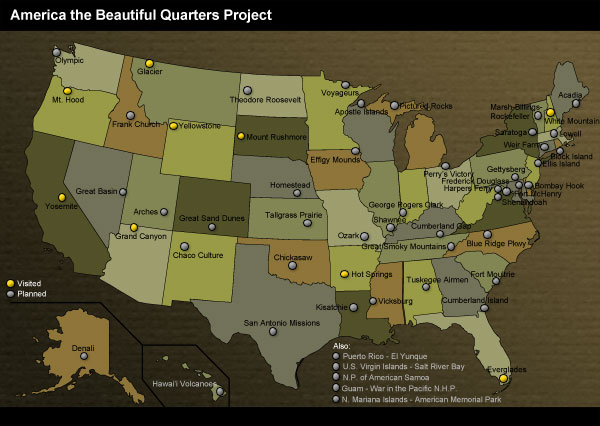 So here we are — 11 years, 56 parks. So far we’ve been to a measly 7 of them, so this leaves us quite an undertaking for the next decade. We aren’t setting rules as to when we must visit them (like, it’s not required that we go to the park in the year of the coin release), so this allows us to go on trips where we hit up multiple parks that are close in proximity. Once we have the silver in hand it’ll push that particular park to the top of the list, so in that respect we are still planning to do them somewhat in order (by year).

So far we’re off to a strong start for 2010 — we acquired the bullion coins a month or two ago, and we’ve been to 3/5 parks and are planning to visit the other 2 as soon as possible. I also acquired some prints and various matting/cutting equipment so we can start to decorate the walls of our new home. 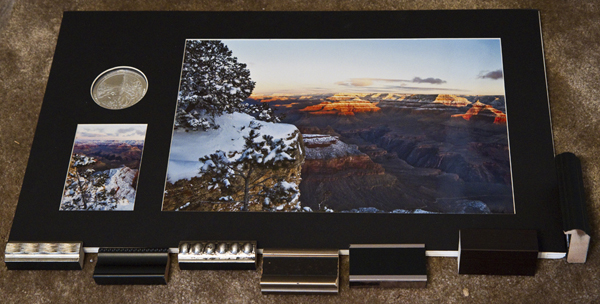 So this is the general concept of our giant wall of coins + photographs. We’re still working on framing options because the coins are thick so I need frames of a certain depth as well as a certain dimension. Each park will have a different layout and frame size depending on which photos we like and want to highlight.

Other information on the America the Beautiful Quarters and Silver Bullion Coins: