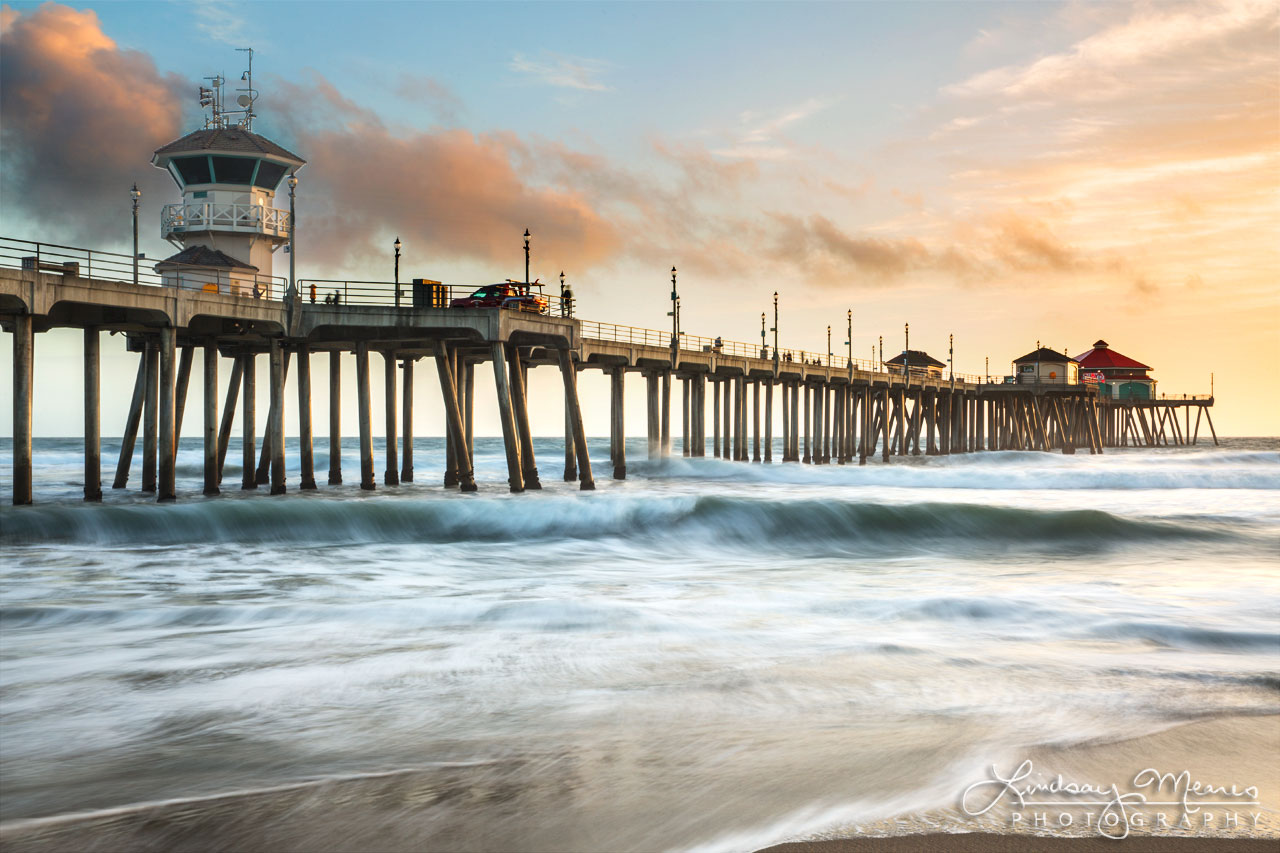 I packed my bags for a long weekend in Southern California, bringing my camera kit as usual.  When I told family I was planning to visit the Huntington Beach pier for photos, I got the same response: “Ha, good luck.”  Apparently the Southern California drought is on pause and they have been having all sorts of rain and storms for the past few weeks.  I checked the forecast — yep, rainy most of the days I was in town.  Oh well!

Not to be deterred, I enthusiastically checked the hourly forecast on my free afternoons to determine my course of action.  Ultimately, I found an adequate afternoon for beach photos.  It wasn’t the most epic sunset by any means, but it was definitely something to work with.

Some pre-sunset fun with longer exposures and painterly waves.  This is only a 0″8 second shot, but just long enough to get some interesting water.

Shooting through the pier.  I’ve been trying to take more alternative angles of the pier, though the photos I’m posting from this trip wouldn’t help you believe that. 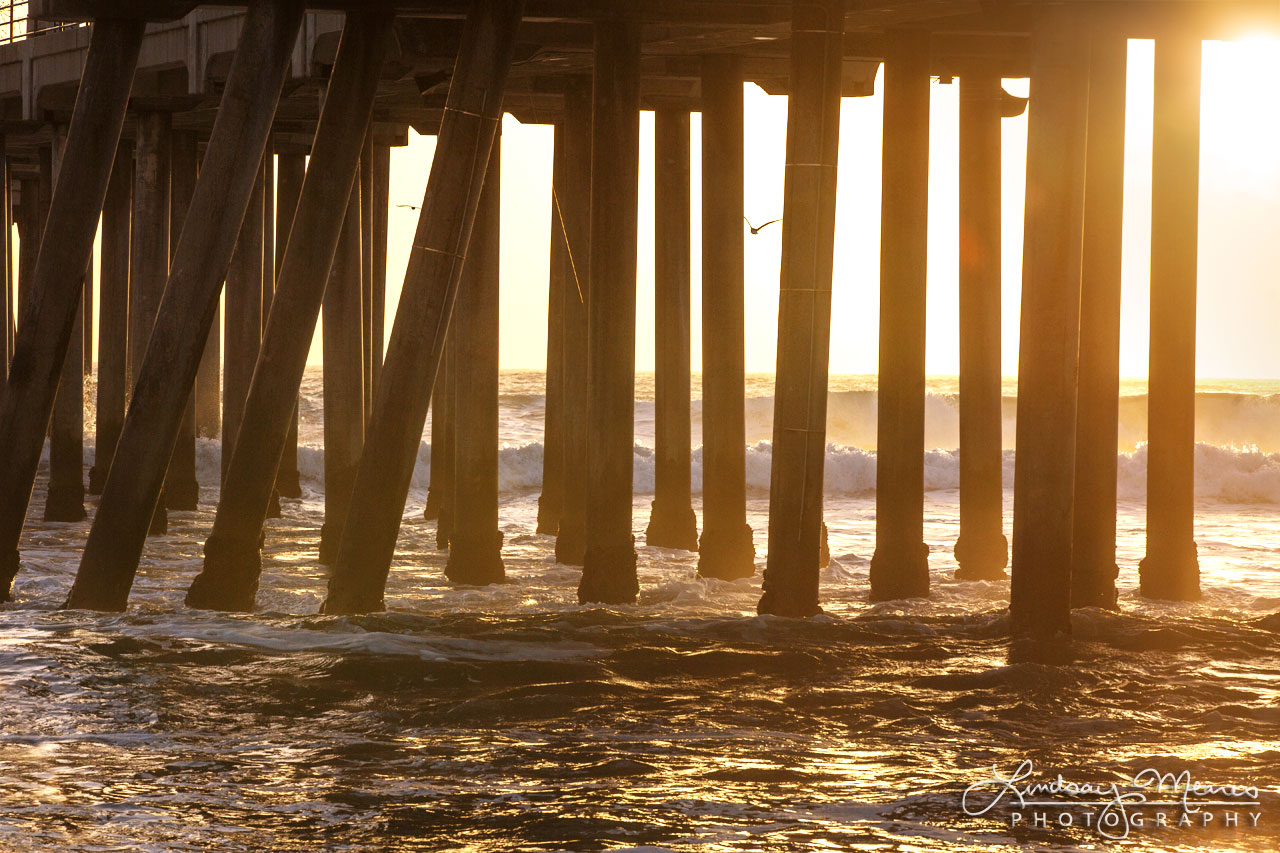 Sunset time! Although there were some promising wispy clouds in the sky, the clouds near the horizon were too dense to completely color the sky.  The sun dipped below them and then most of the pretty light disappeared. 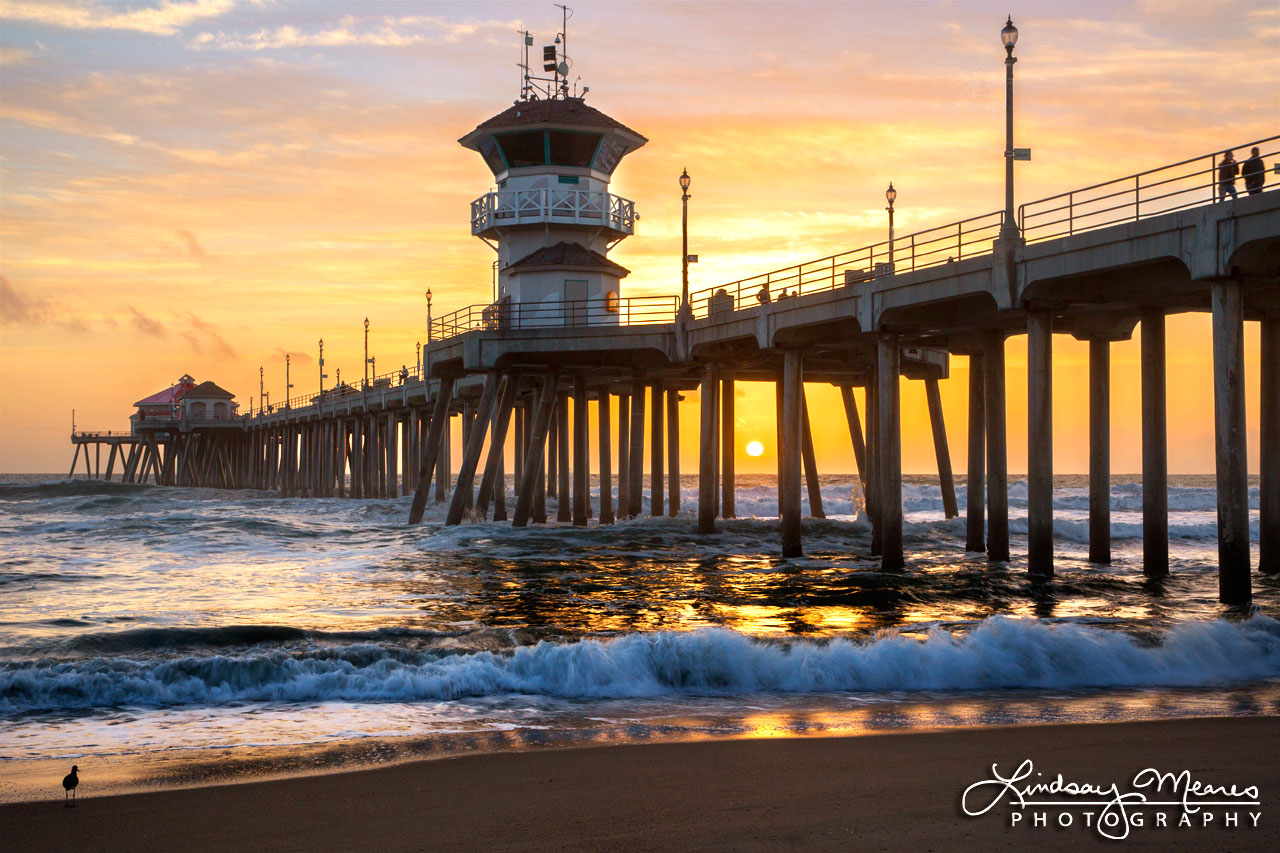 After that I hung around until dusk — late enough for the pier lights to turn on but not much else.  I noticed they seem to have upgraded their lights since the last time I was here.

I really like the wet sand detail in this shot, reflecting the last bit of daylight and the pier lights. 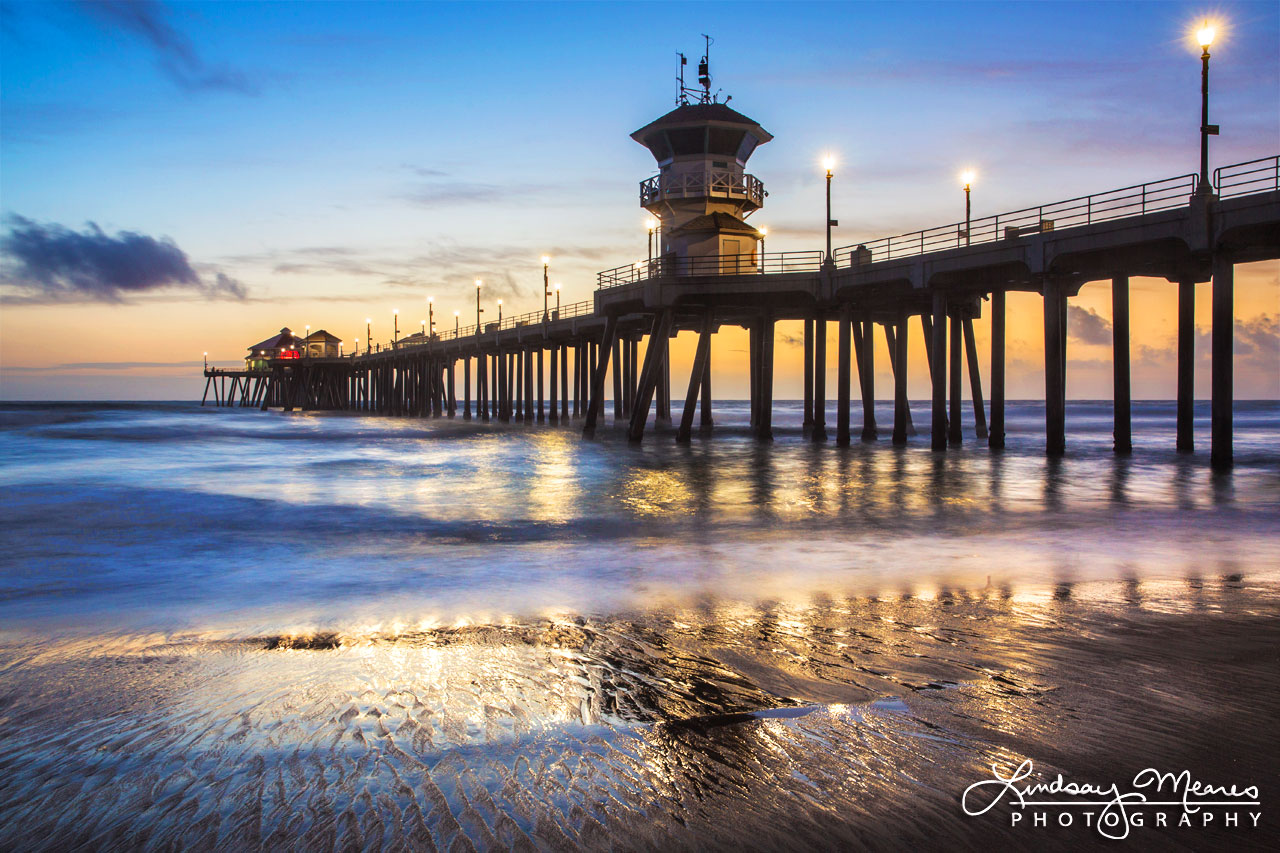 Anyway, that was my successful evening!  It was all I expecting to get, since the rest of the weekend was forecasted to be quite rainy (and I had plans on most days).

Monday morning, the day our our flight home, I was sitting around drinking coffee when I noticed it was both rainy and sunny.  I checked outside, and there was a beautiful, full rainbow arcing across the sky in the neighborhood.  I ran back inside, and decided I was going to the beach RIGHT NOW.  Rainbows are usually quite fleeting, so Travis rightly laughed at me and told me I’d never make it in time. 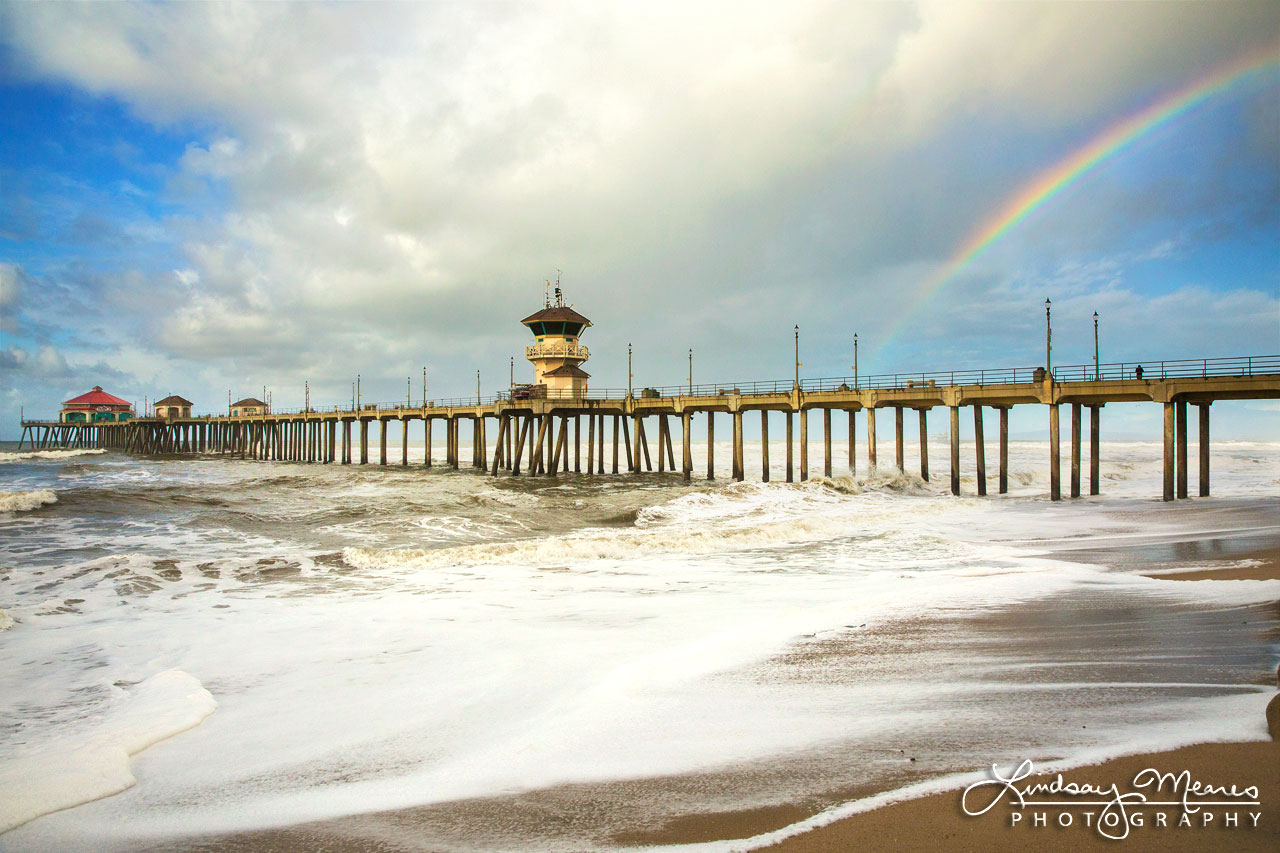 To be fair it wasn’t the same rainbow.  The first one faded as I was driving, but I was determined and waited around long enough in the rain under the pier until the sun came out again and I got a half-rainbow stretching over the base of the pier. 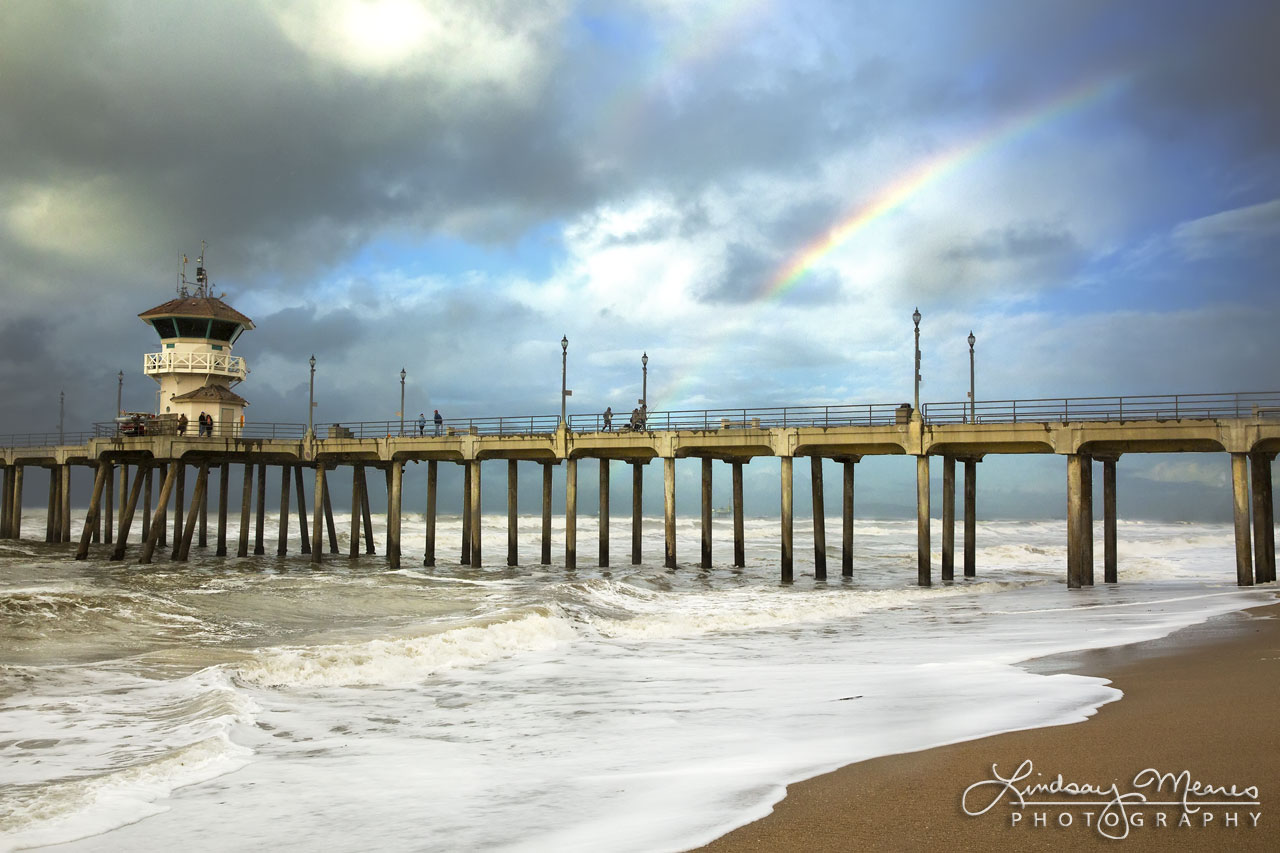 After my fleeting rainbows the clouds were clearing in the rainbow direction and some big fierce clouds were rolling in.  There was a final break in the clouds which lit up the pier and ocean in front of the stormy skies, and then I decided my luck was done and decided to leave before it got too rainy. 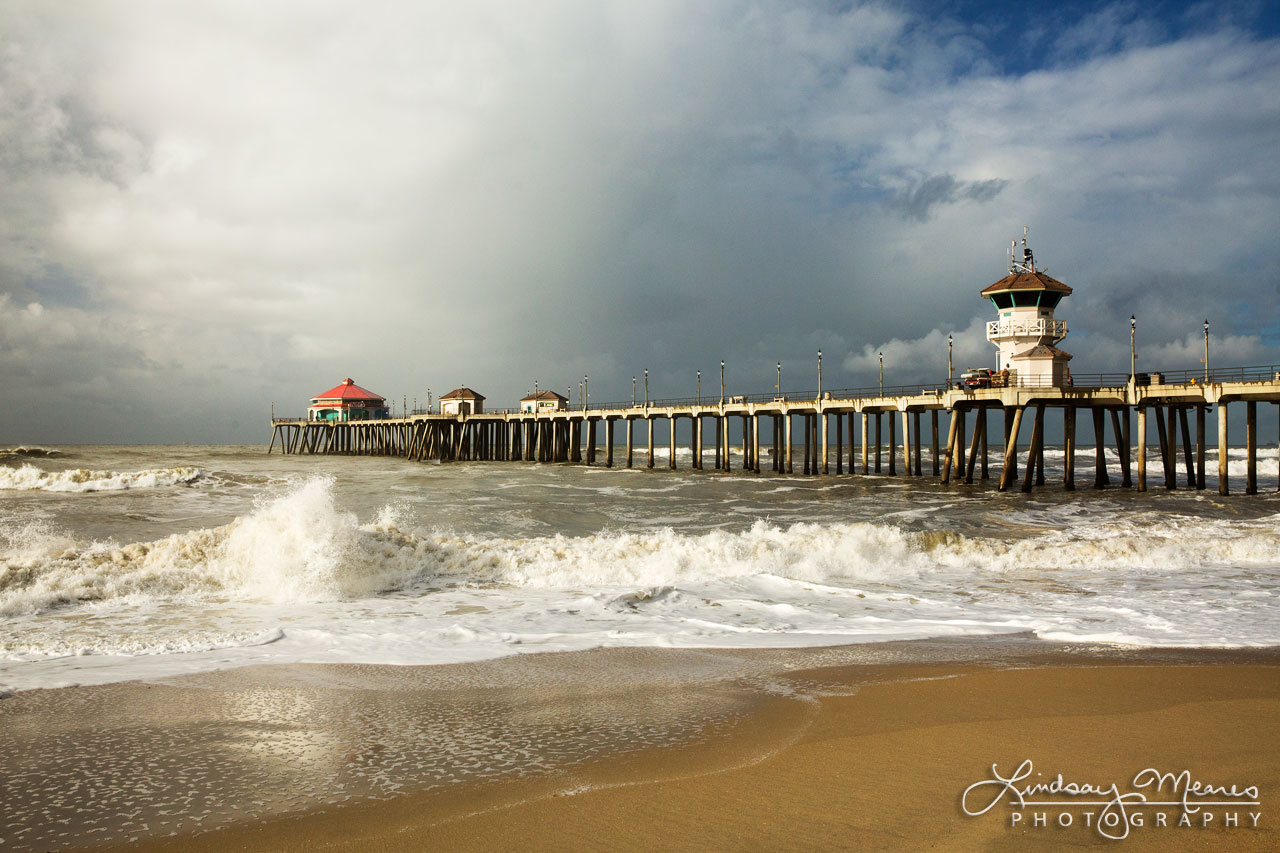 Anyway, it was a good trip and I added some nice shots to my pier collection.  The weather forecast was grim, but to be honest I’m used to Southern California being completely clear a great deal of the time, so having mixed weather to work with was a nice change.

I’ve finally been working on uploading photos to Etsy and Amazon Handmade.  I’m not sure which one I like more but so far I’m uploading to both.  There is a Huntington Beach collection up, moving on to more variety soon! 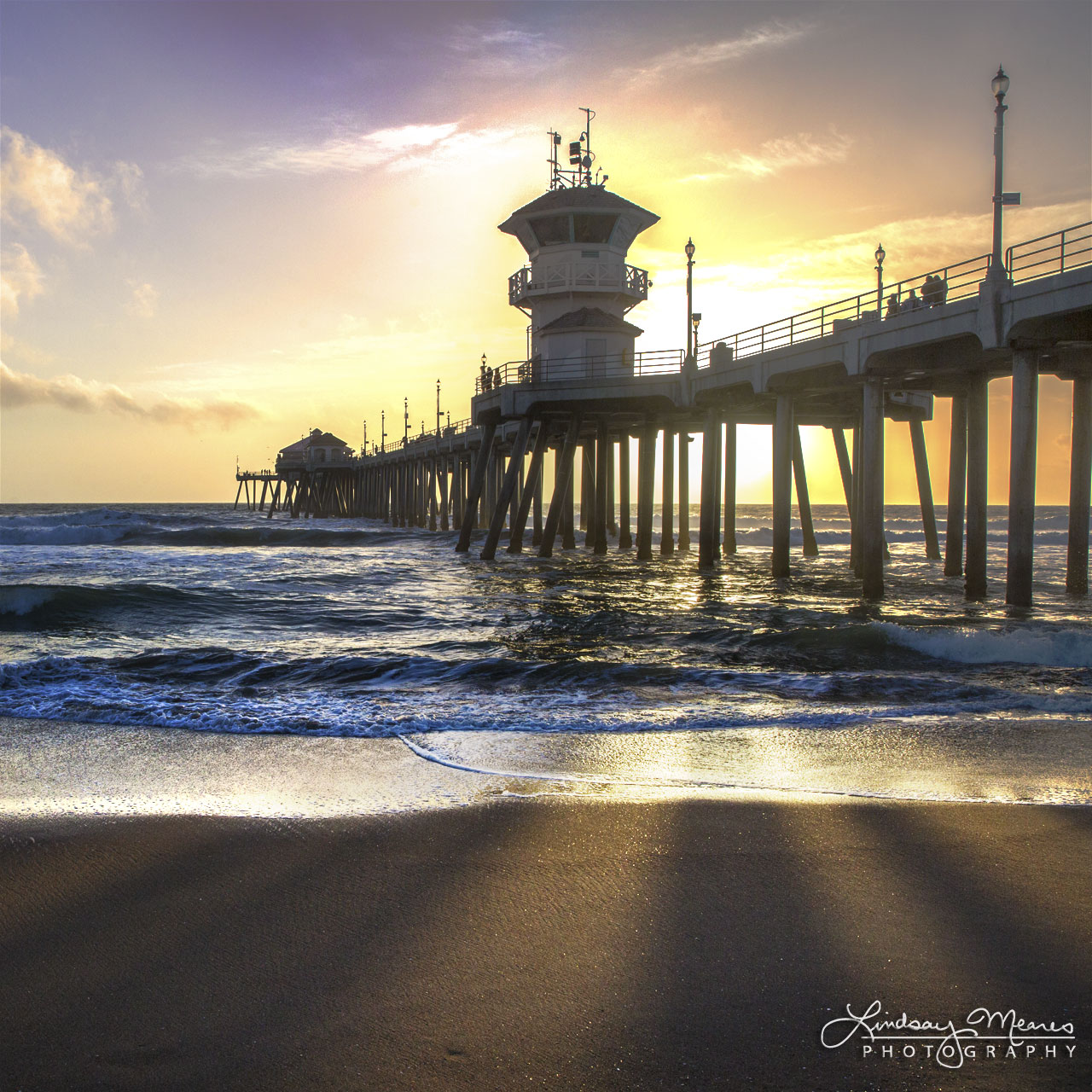 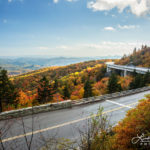 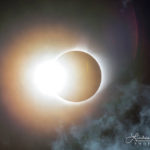