When we started planning our summer road trip we had a plan to drive from Texas to California, up the coast to Washington, visit the San Juan islands and then somehow make it down to Crater Lake National Park, which we had not visited since our 4-month road trip in 2009.

There are only two hotels inside Crater Lake National Park: The Crater Lake Lodge along the rim, and Mazama Village Campground & Cabins.  I started browsing for lodging at either of the two park hotels for an early July reservation in March 2021 and it was all fully booked; however, as is the case with most parks lodging, you can generally find cancellations if you are diligent about checking the website multiple times per day and are flexible on lodging dates.

It didn’t take me long to snag a two-night stay at Mazama cabins for July 1-3, but after reviewing our trip agenda I eventually switched to July 7-9 dates.  I also found some reservations at the Crater Lake Lodge for those same dates, but there is a significant price difference to stay on the rim and while sometimes we like to splurge for such things, this time we decided to opt for the Mazama cabins which are only 7-miles from Crater Lake Village.

Looking at our trip now, it seems illogical that we drove all the way down to Crater Lake National Park and then all the way back north through Oregon and Washington to head over to Glacier National Park, but Crater Lake was one of our first hotels booked back in March, and we didn’t decide we were going through Montana on our return route until late June.

Our original return trip plans had us venturing back down into California to visit Lassen Volcanic and Yosemite National Parks, then head either towards Lake Tahoe or Kings Canyon & Sequoia and somehow find our way home.  While I did have the foresight to snag some Yosemite day pass reservations for the week we would have visited, we didn’t look at hotels until late June and at that point they were sold out or expensive.  I probably could have searched daily for last-minute cancellations in El Portal, but while looking for other options I came across some last minute cancellations inside Glacier National Park and jumped on those.  Then we decided if we were going all the way to Montana, we may as well return through North Dakota, since it’s basically on the way back to Texas, right?  That’s a story for another day though. 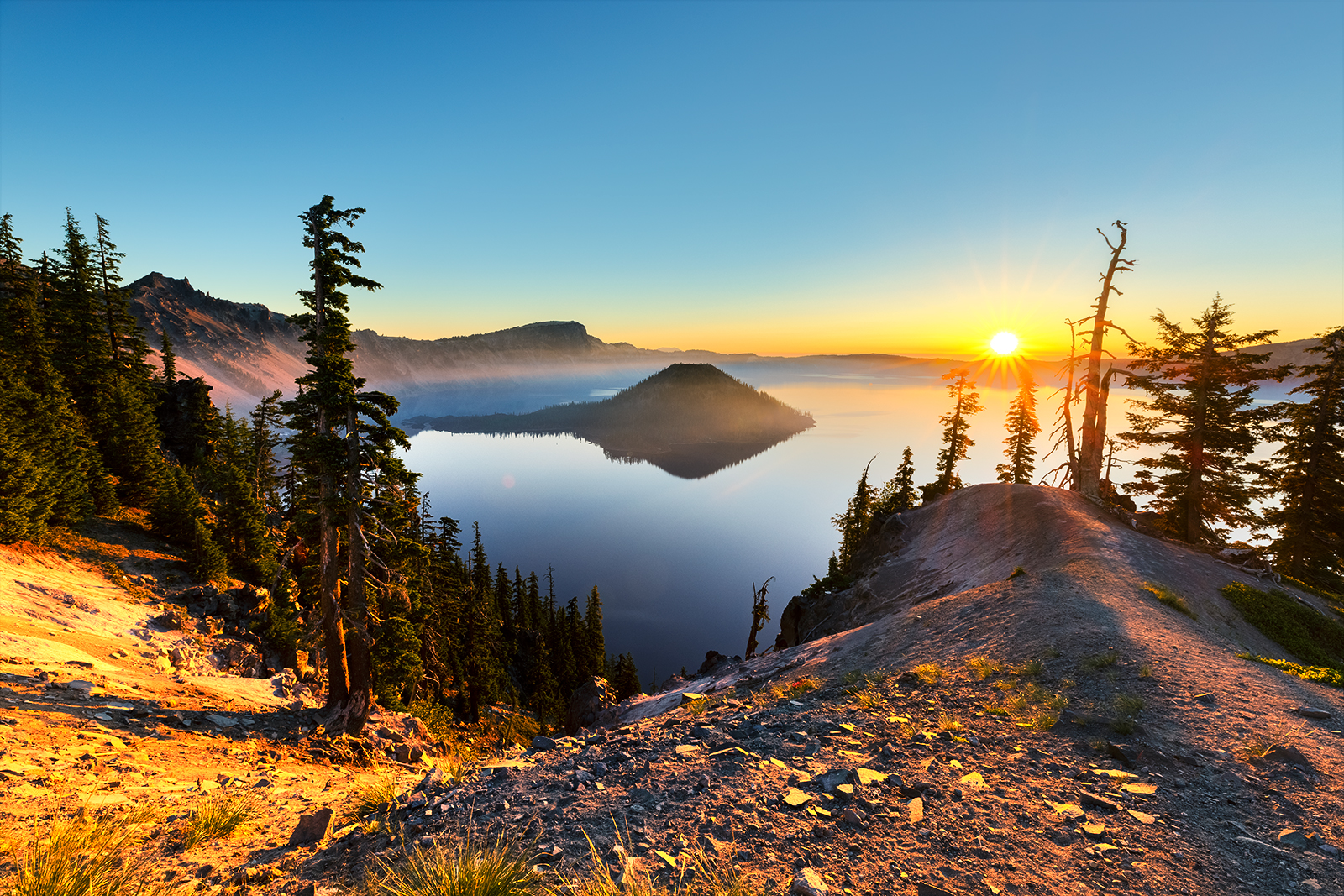 Back to Crater Lake National Park!  We visited Crater Lake on our 2009 road trip, but we did it as part of a day drive from Portland to Medford, which is probably 6 hours of driving from Point A to Point B, not including any of the Crater Rim loop.  On that trip we arrived at 5pm, drove the full park rim road, and then left to continue onwards to our hotel in Medford over an hour away.  We always thought it would be nice to return and actually spend some time and do some hikes, but Crater Lake was always too far to work into our previous Oregon visits (we’ve always flown to Portland) which is why it was one of the first places I booked for this trip.

Our stay at Crater Lake National Park was July 7-9.  Two wildfires, the Jack Fire and the massive Bootleg Fire started on July 5 and July 6, respectively.  I’m not sure which wildfire smoke was reaching Crater Lake (probably both at different times) but we had very mixed conditions with visibility and air quality during our stay.

Our drive into Crater Lake was a bit smoky but as we reached the park the conditions were fairly decent in the afternoon.  However, by the evening a thick layer of hazy fog had rolled in and I could barely see Wizard Island in the middle of the lake. 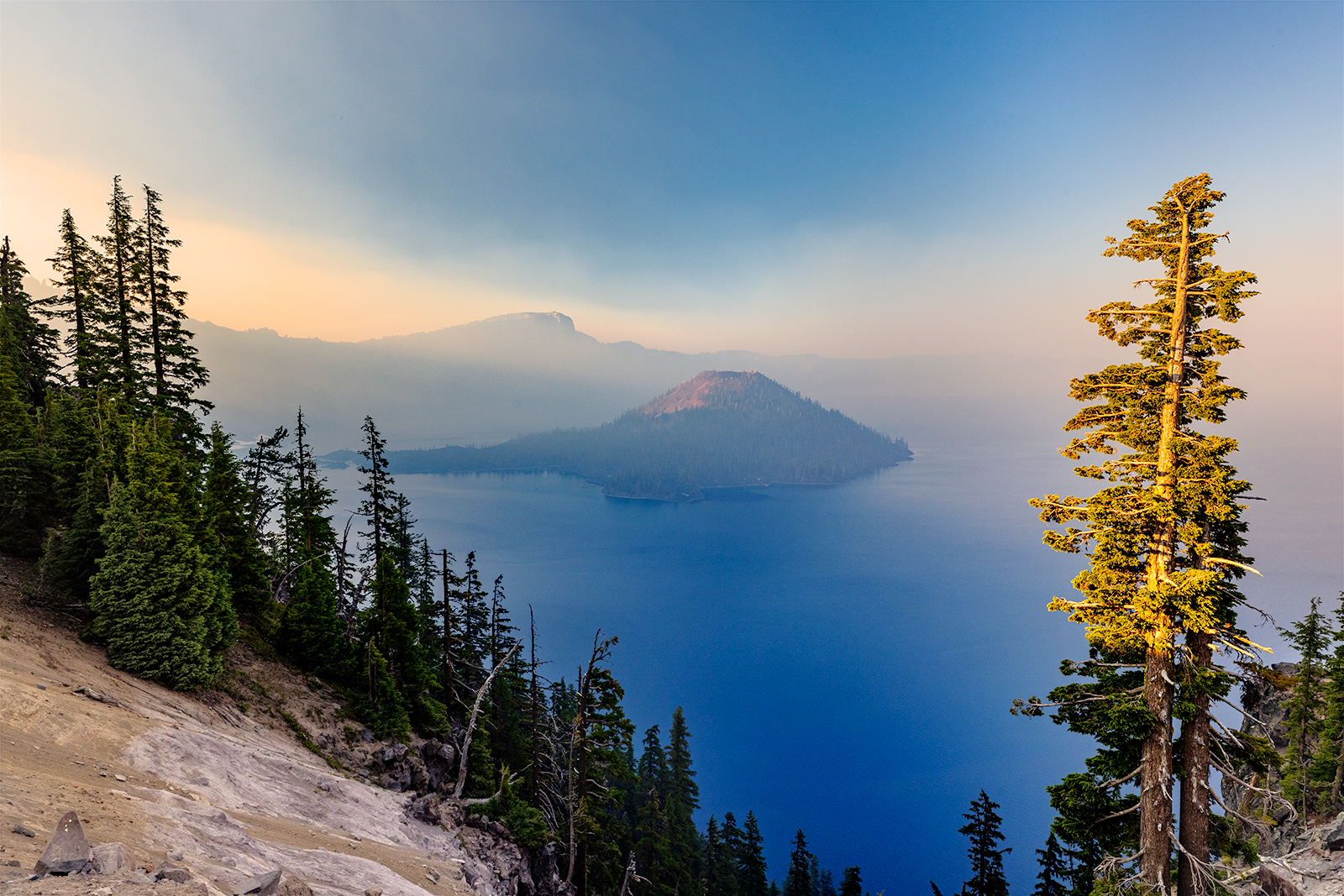 By morning the smoke had dropped a bit I did a full loop of the rim drive by myself and walked to the Phantom Ship viewpoints.  Later in the day I dropped my husband off about 3 miles from the visitor center so he could get in a hike and I took the kids over to the main Rim Village to check out the gift stores and get our National Parks Passport stamps.

For sunset we decided to go over to the Watchman Peak vista area.  My husband was planning to do the hike, followed by me maybe doing the hike, but instead my 4-year old decided he wanted to hike up the Watchman Peak trail and we decided to see how far he would get on the 1.7 mile round trip trail which was entirely uphill for the first half.  Surprisingly, he made it all the way to the top, which is probably the the hardest hike he’s completed thus far.  The longest hike he’s accomplished was the Riverside Walk (1.9 miles) in Zion National Park, but even though that one was a little longer, the trail is entirely flat and paved. 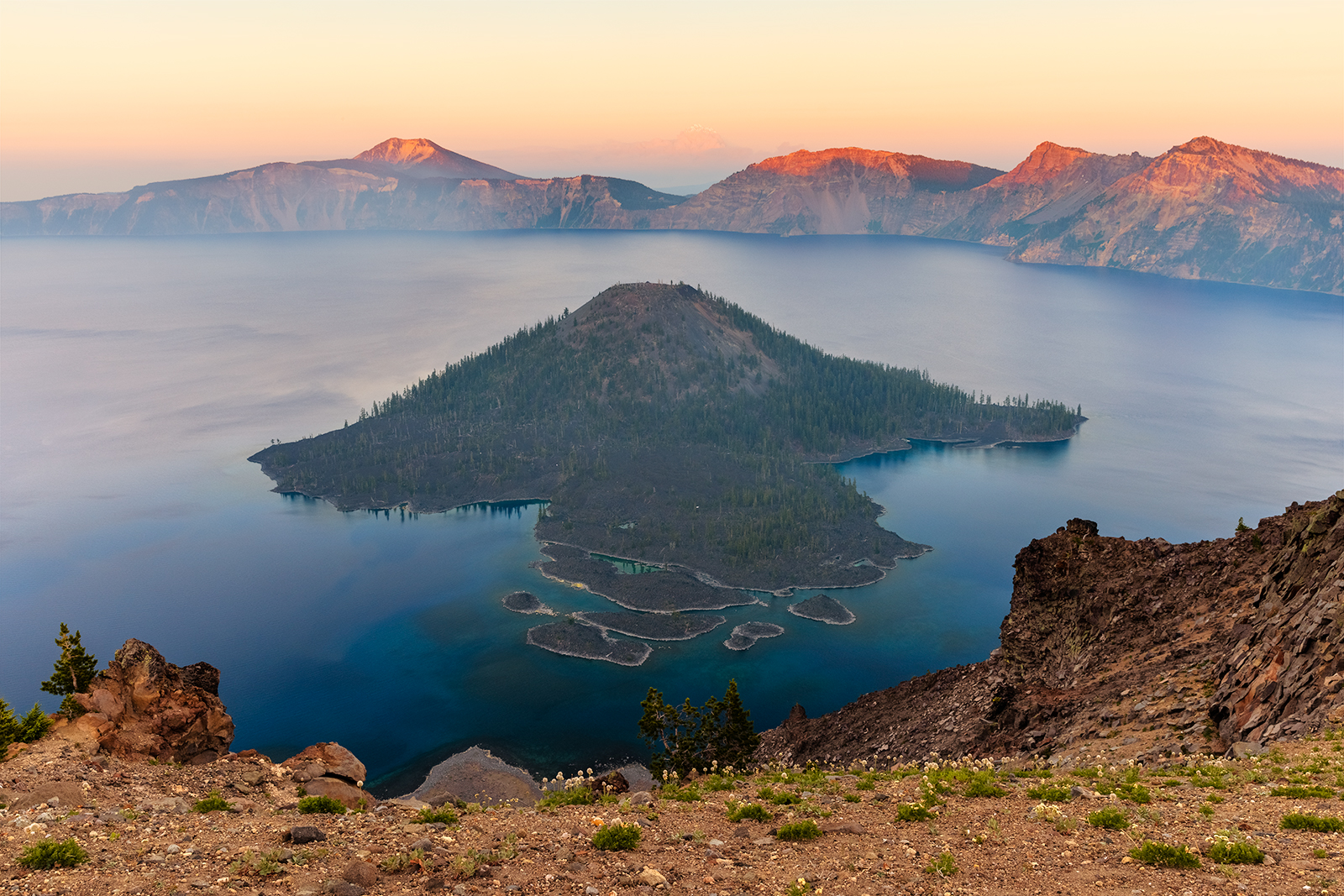 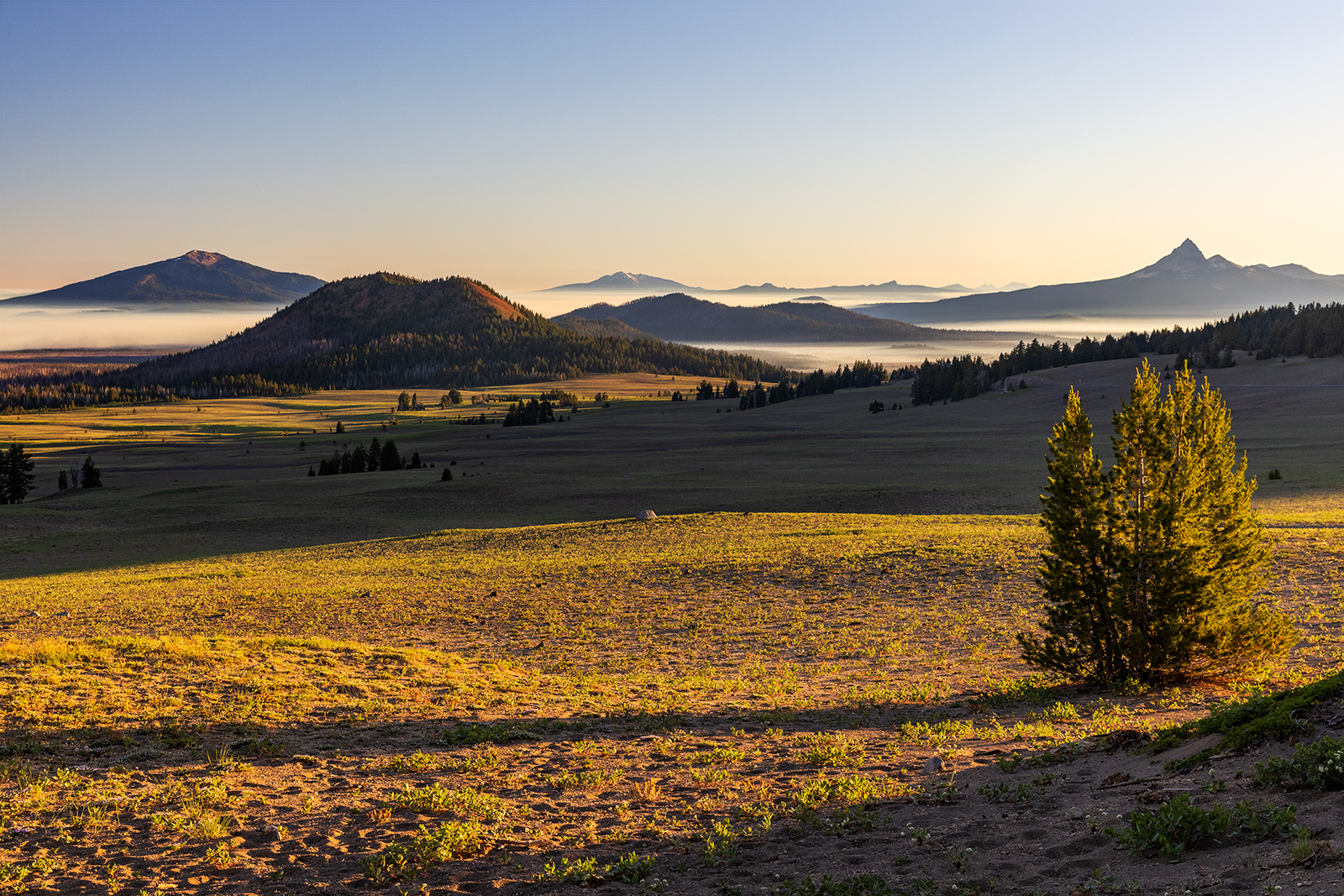 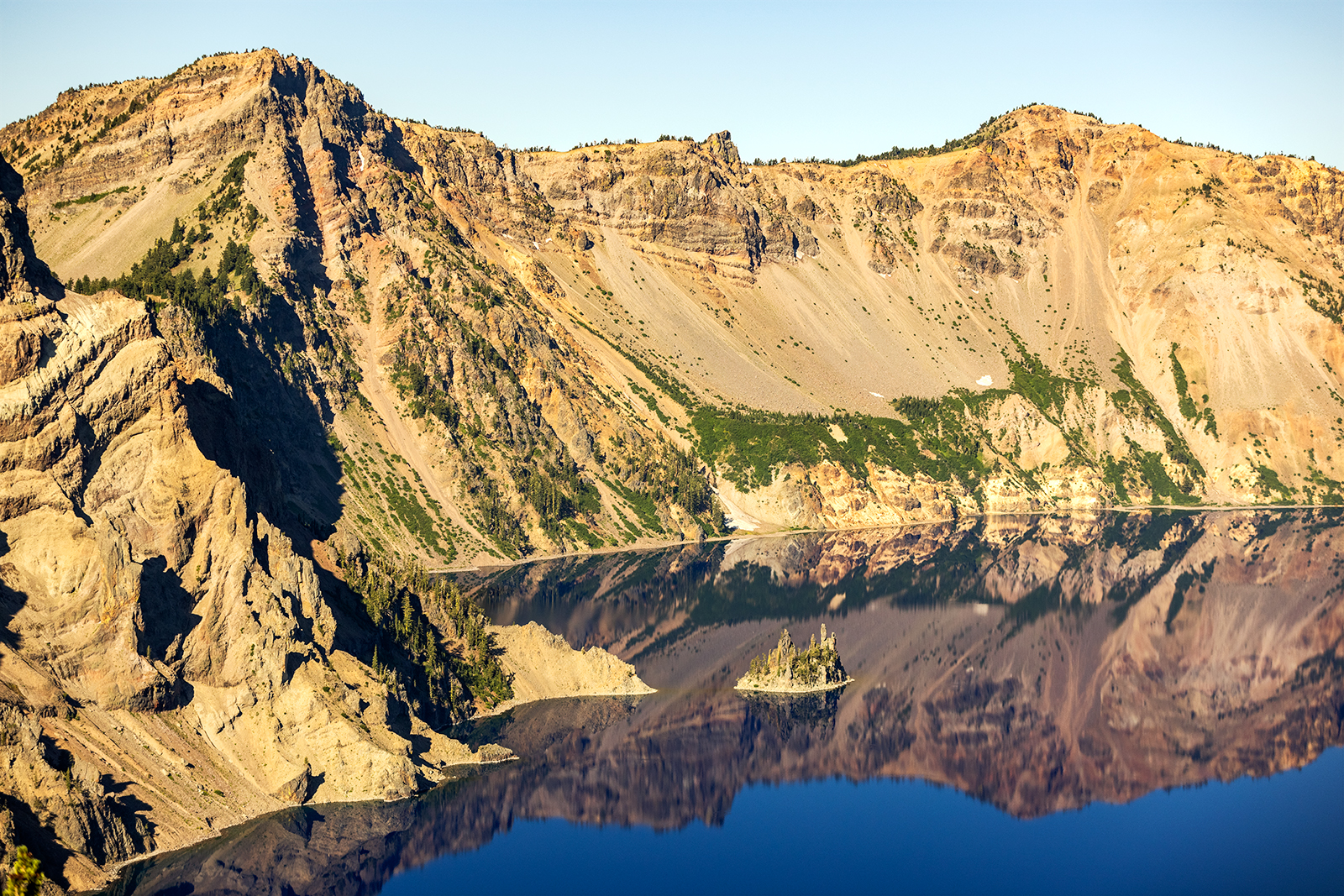 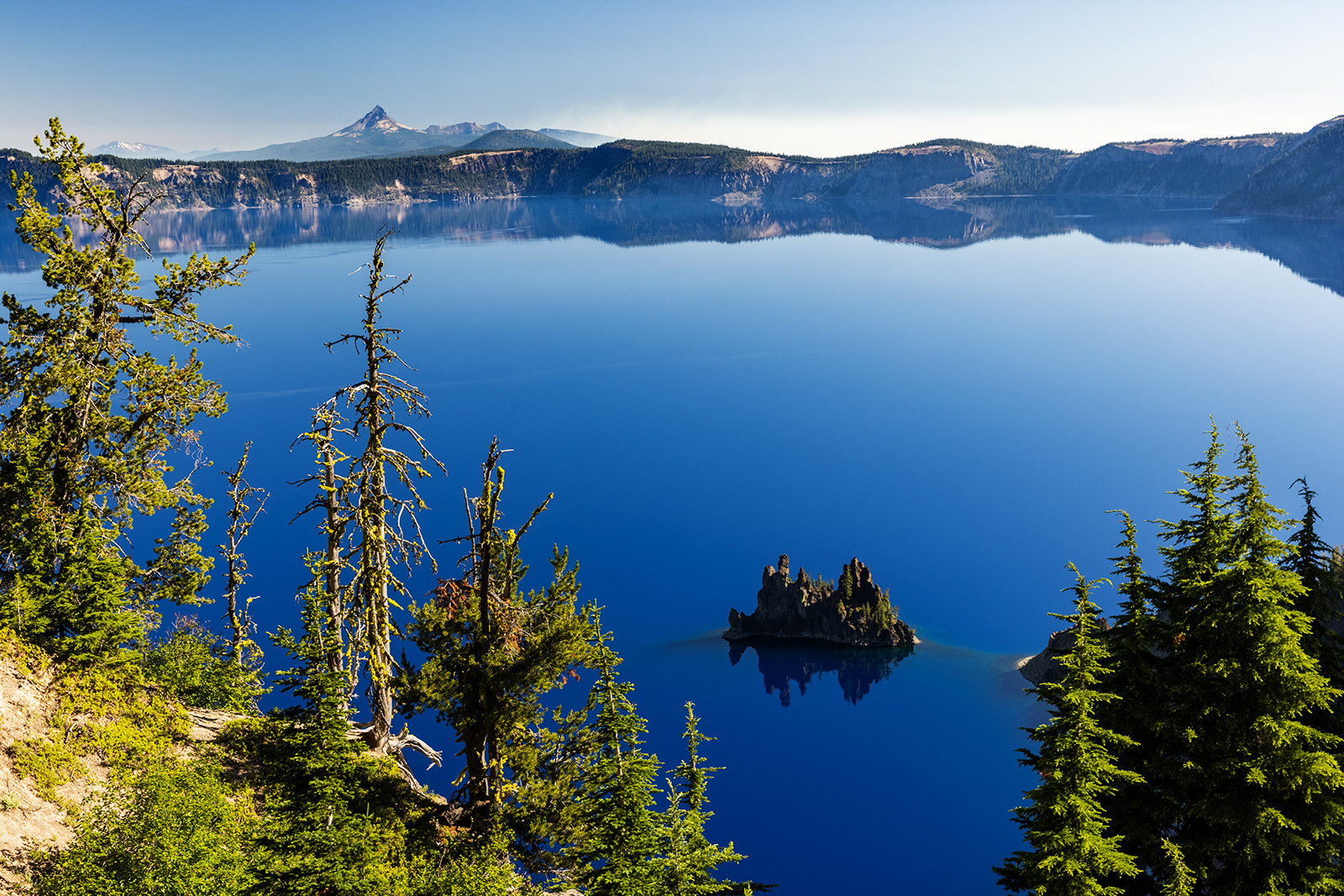 Our final morning I woke up for sunrise and the haze had almost completely disappeared.  There were probably some better spots I could have picked for sunrise, but I eventually made it over to the visitor center and got some really nice photos of the still morning lake with some nice wispy clouds.

After Crater Lake we began our backtrack through Oregon and Washington, which was scenic but unfortunately marred by lots of summer haze for the majority of our return route 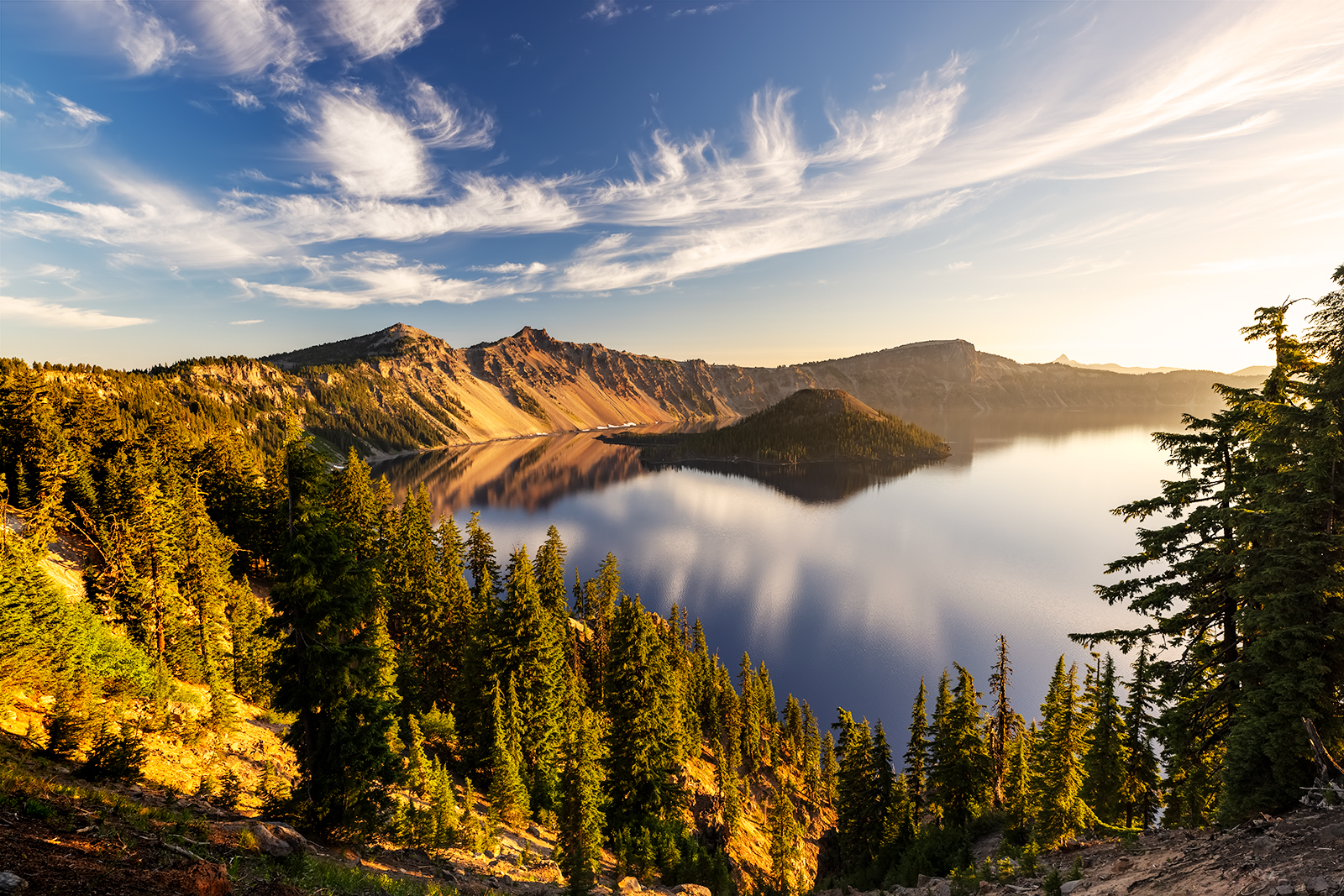 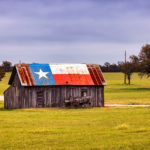 Prev On the Road in Texas: Dallas to Lubbock
Next Oregon's Painted Hills 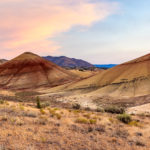