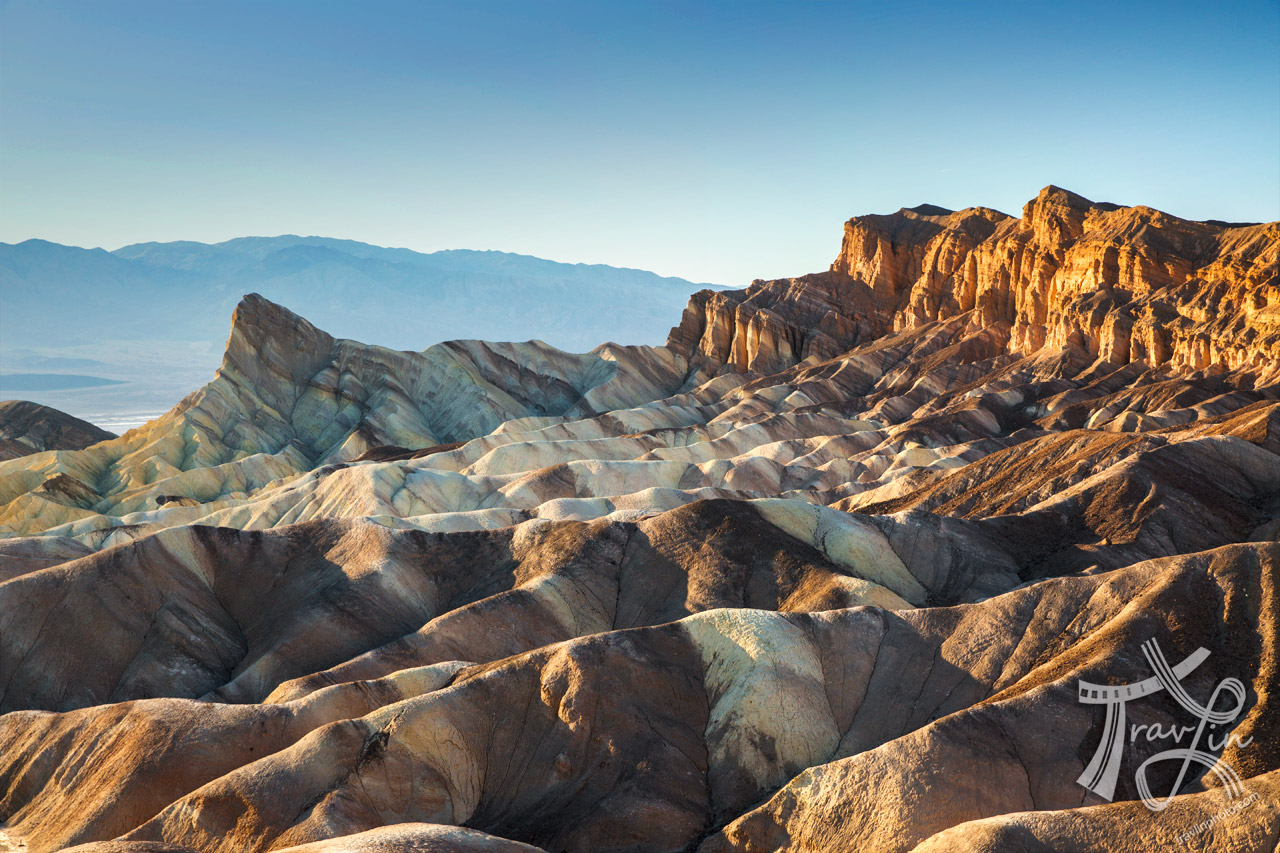 It’s been awhile since we visited Death Valley Valley National Park, and by “awhile” I mean nearly 9 years.  The last (and only) time we visited Death Valley was in April of 2009, during the first couple weeks of our four month road trip around the United States.  We drove in from Bishop one day, camped overnight, and drove to Las Vegas the following day.

I can’t say we spent much longer in the park on this go around.  We aimed to arrive in the afternoon, stay the night in the park, and then leave after sunset the following day.  Unfortunately, our DAL—>LAS flight was delayed an hour or two, which shortened our day one sightseeing plans.  We grabbed some burgers and ate in the car while on the road to Death Valley, and managed to arrive at Zabriski Point for some late afternoon light.  We thought we’d try to make it down to the Mesquite Sand Dunes for sunset, but eventually decided that was unrealistic.  I say “sunset”, but really the sun drops below the tall mountains quite a bit earlier than the actual horizon sunset; definitely a huge factor in our travels.

As we drove, we determined the sand dunes were unrealistic, so we stopped at some salt flats to enjoy the last light and took some nice pictures of the scenery. 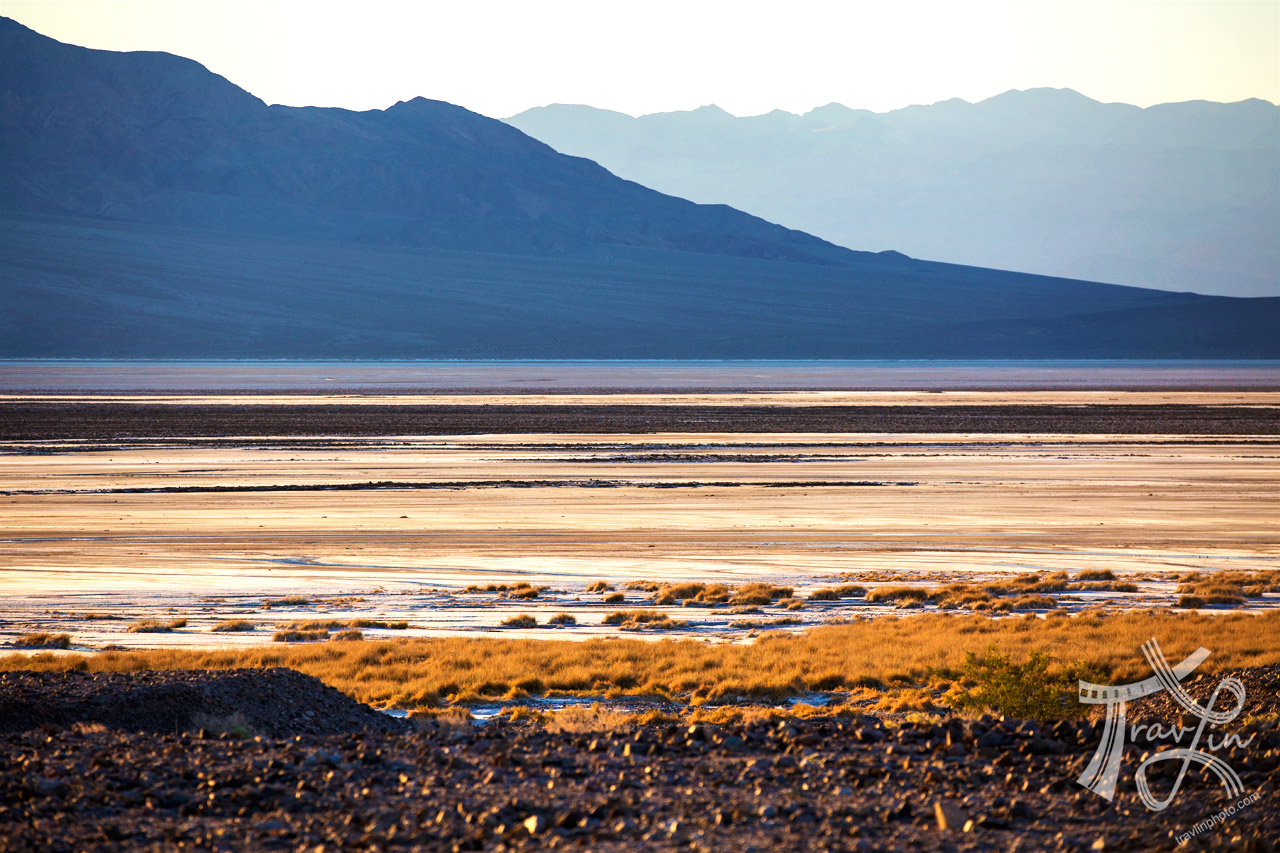 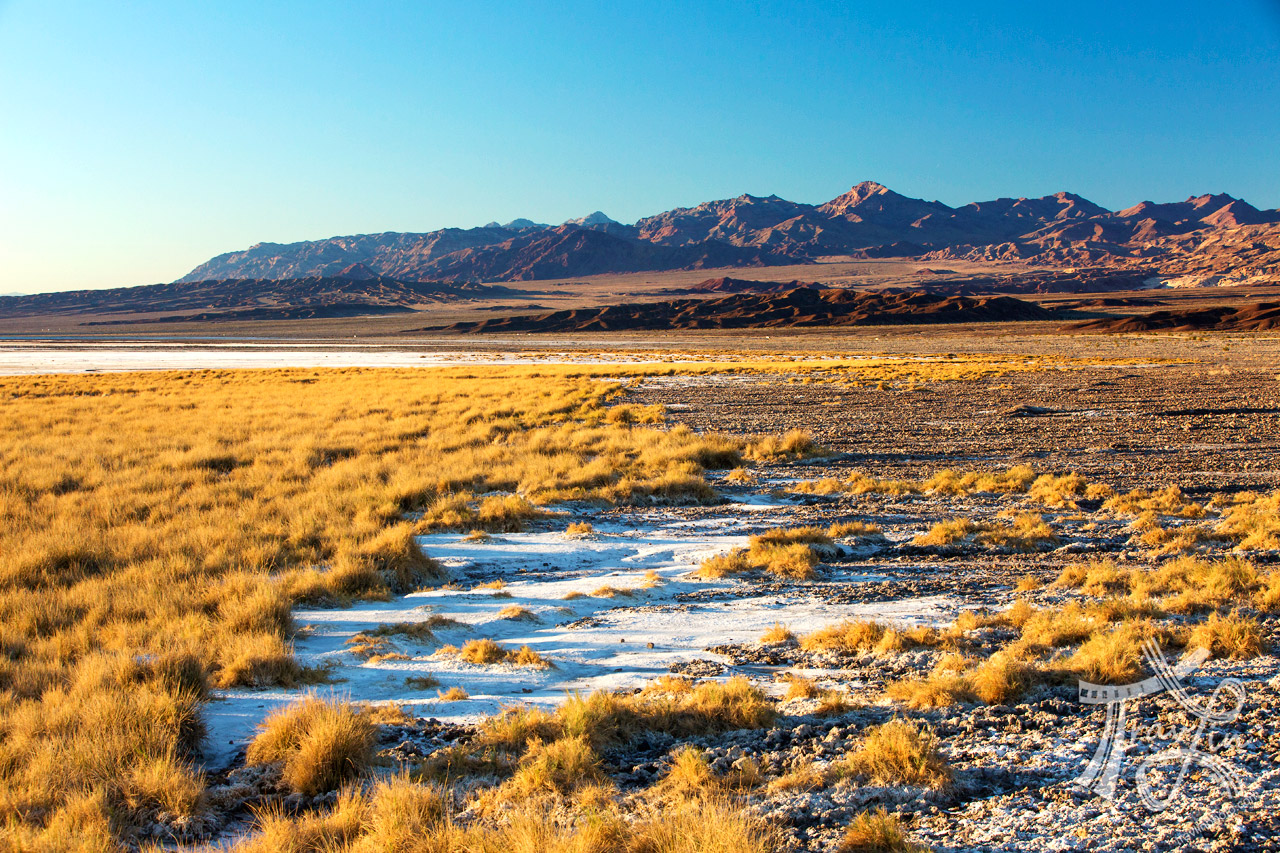 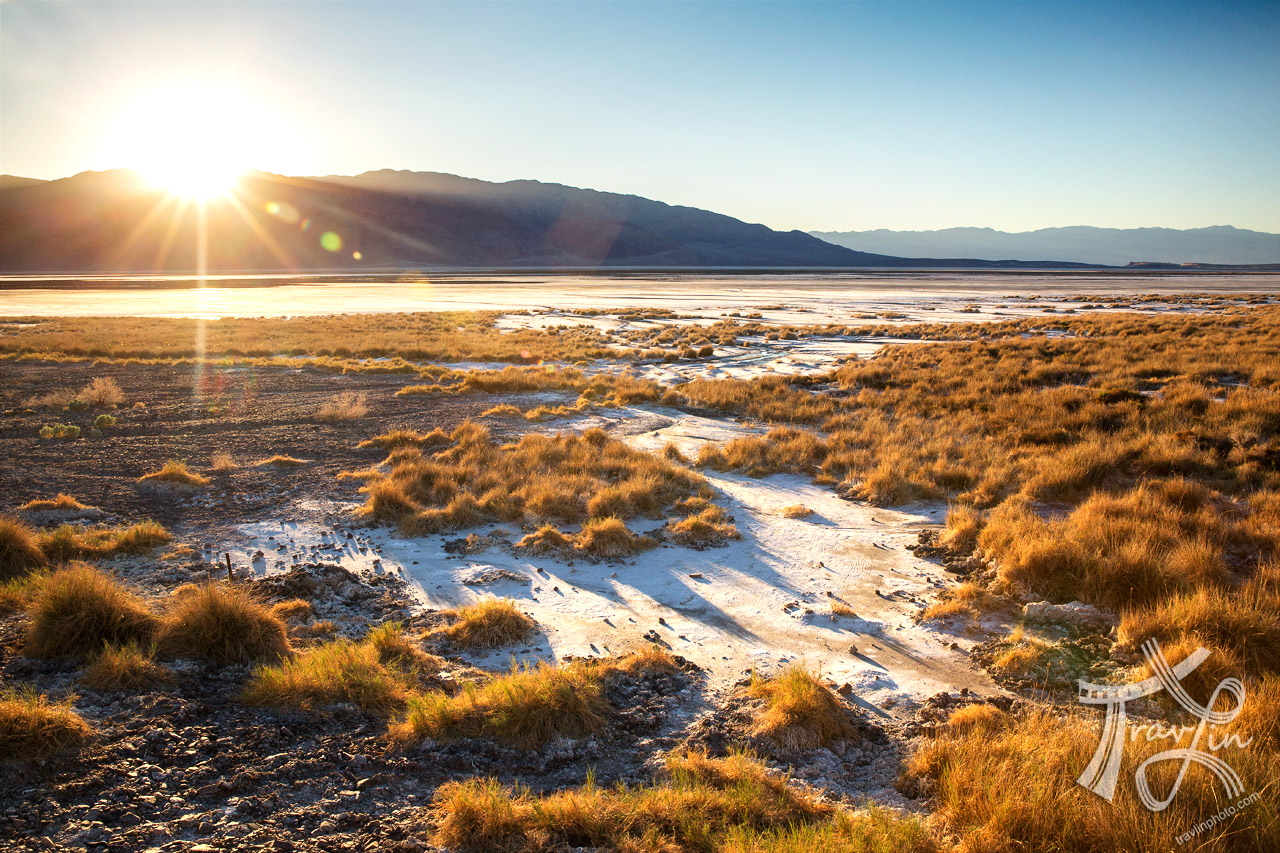 We checked into our room at the Stovepipe Wells Village Hotel, where they gave us a quiet corner room with a view of the dunes.  Of course I decided to attempt some night photography from the parking lot while we enjoyed a beer or two on the rocking chairs.  I intentionally set up my star trails shot to pick up the light pollution from Las Vegas. 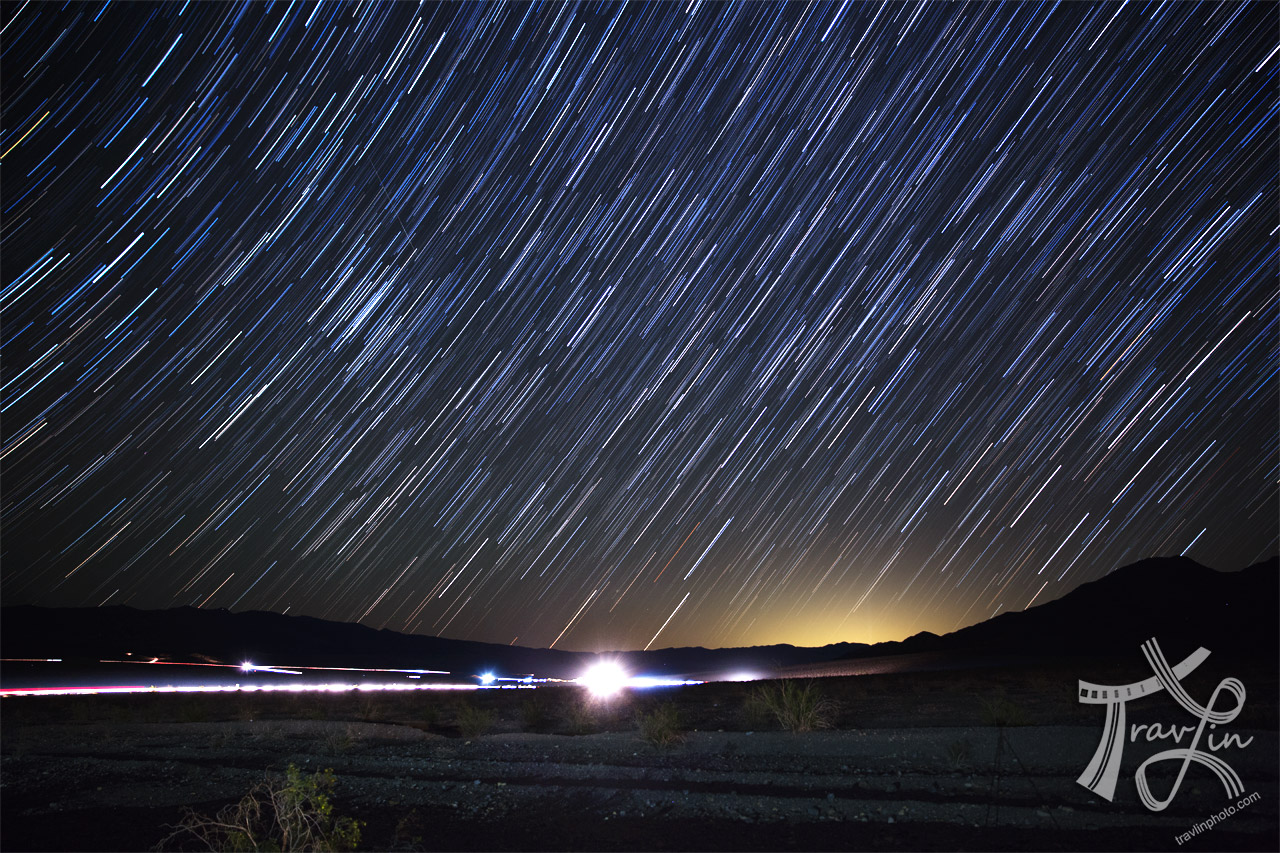 It was also dark enough we could see the unlit part of the moon, which is called earthshine.  It happens when sunlight reflects off the earth and shines up onto the disc of the moon, and is most likely to be seen on a crescent moon shortly after sunset or before sunrise.  Not the greatest photo (I didn’t bring my long lens) but I thought it was interesting. 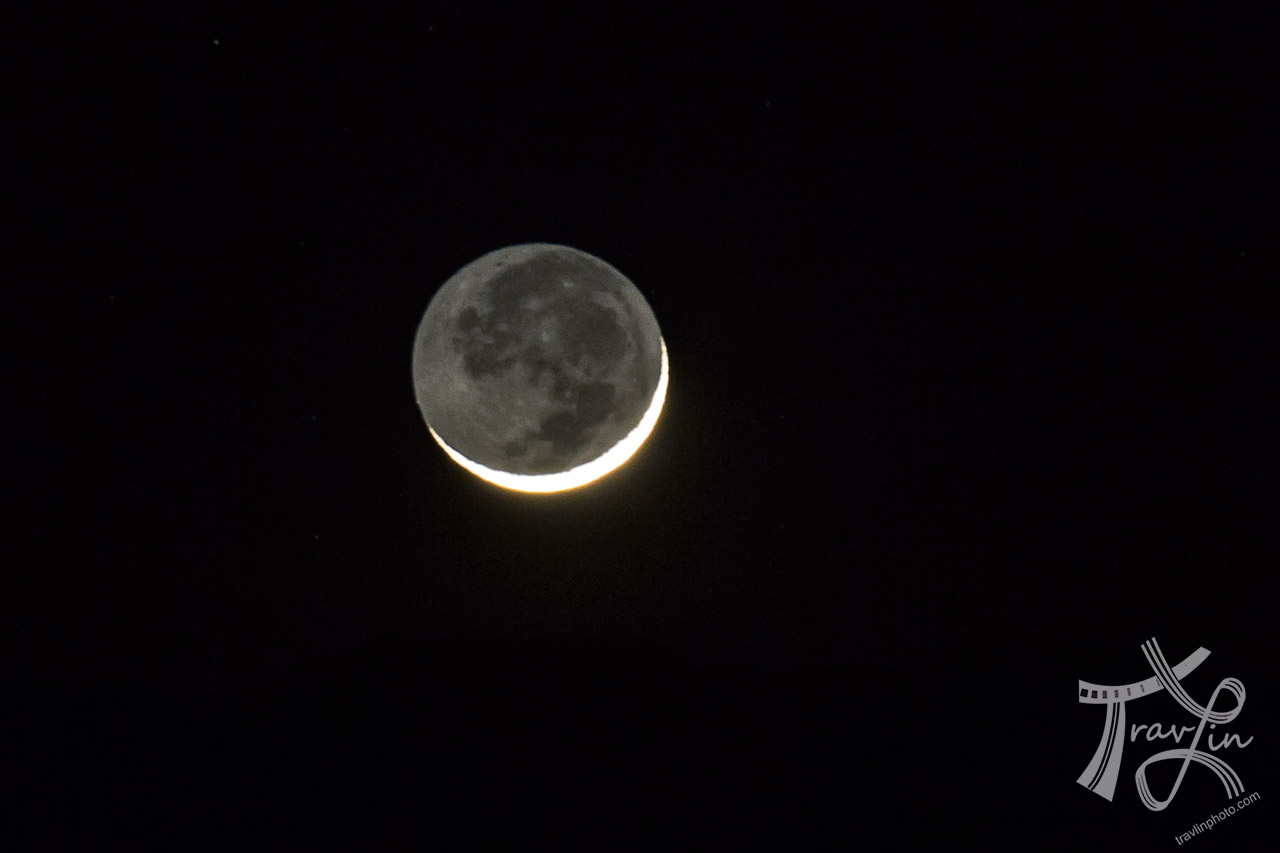 The next morning we ventured across the street to the Mesquite Sand Dunes for a sunrise photo op.  Lots of people out on the dunes for sunrise, including many other photographers (of course!) 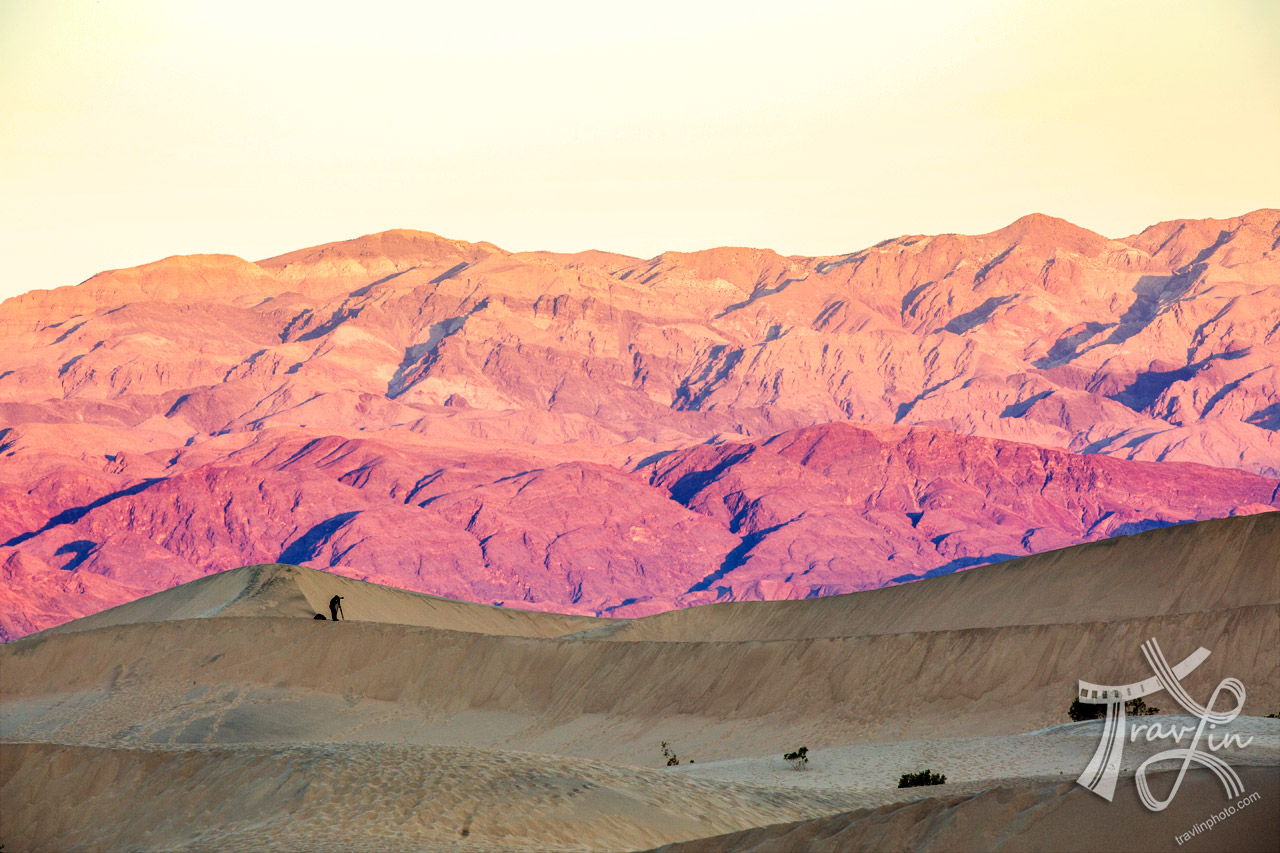 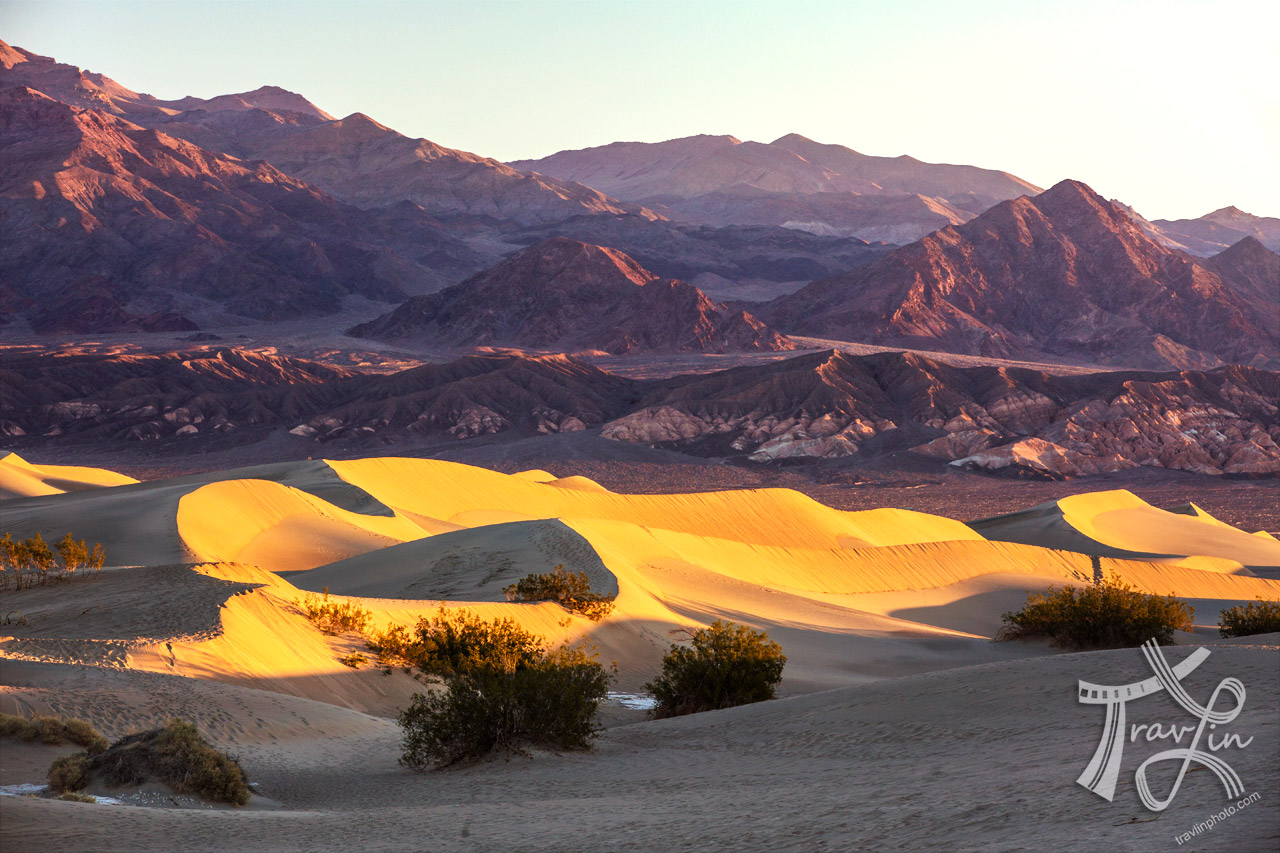 After that we grabbed some food at the hotel breakfast buffet and then hung out until checkout hour since we knew we’d be on the road from when we left the hotel until sunset in Death Valley, and then the drive back to Las Vegas.

Our daytime excursions were pretty tame as we had to find the gentle balance between sightseeing and negotiating naps with an 8-month old.  We opted to do many of the short hikes in the park and attempt to let the baby sleep while we were driving (this nap plan went poorly).

First stop: a loop around the Salt Creek Interpretive Trail, a 1/2 mile boardwalk trail with views of Salt Creek and the endangered pupfish. 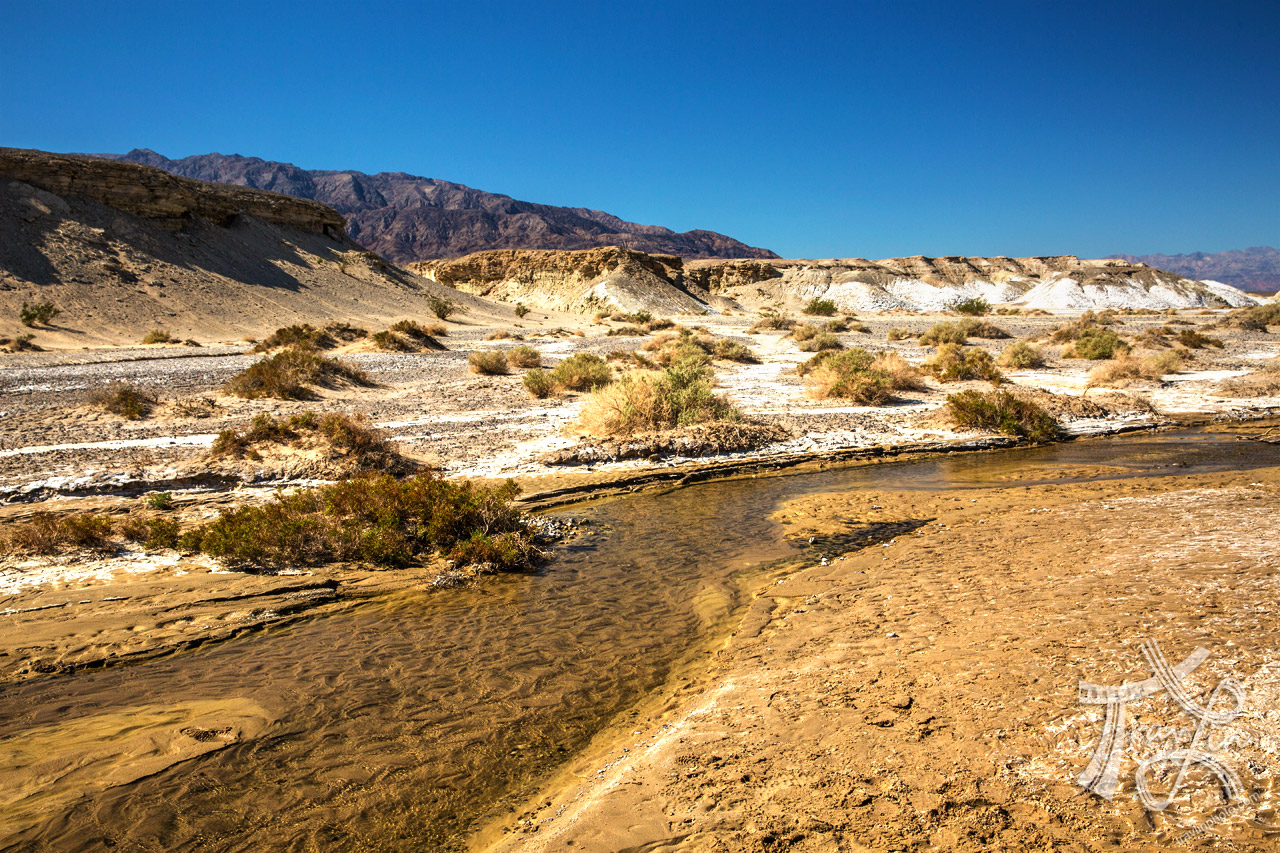 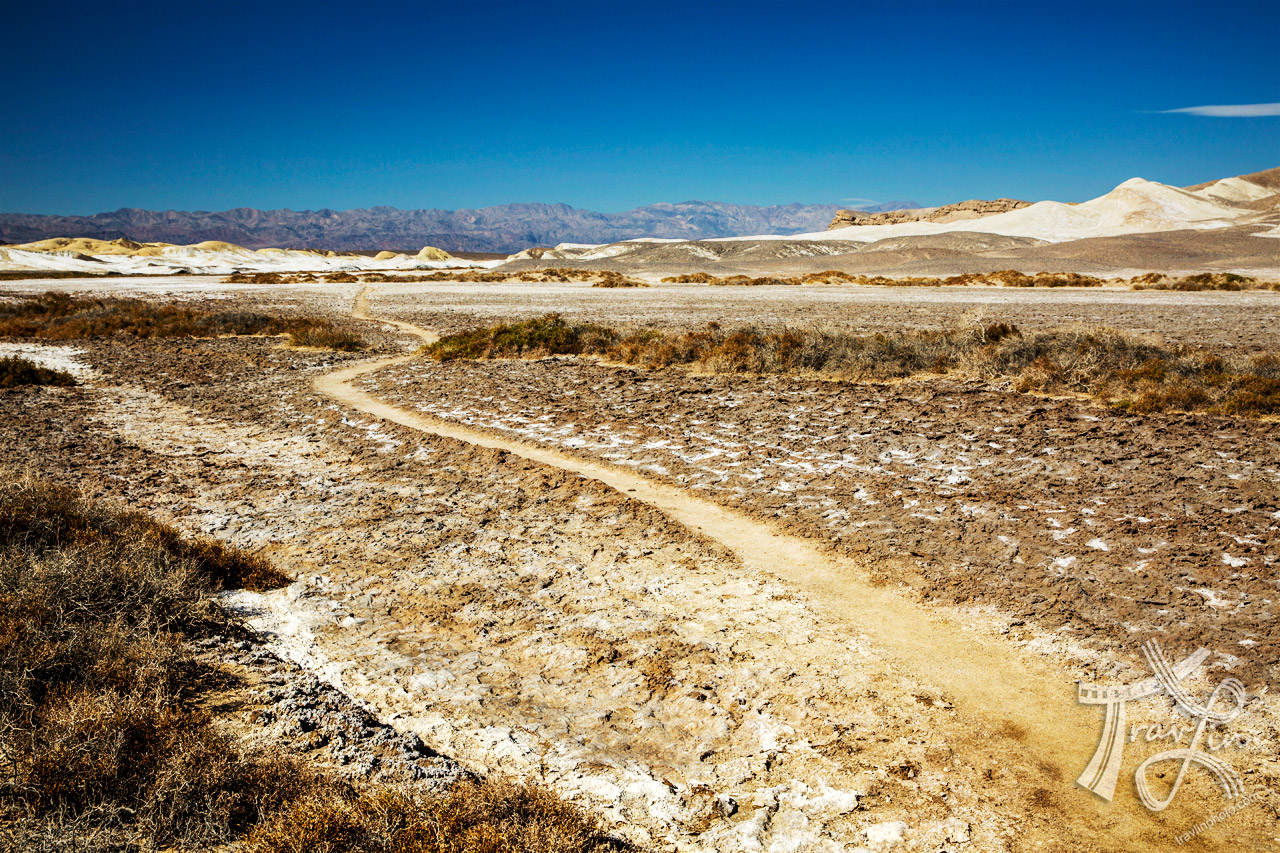 A walk to the Natural Bridge, one mile round trip.  We thought we hadn’t done this trail on our previous visit, but it turns out we had. 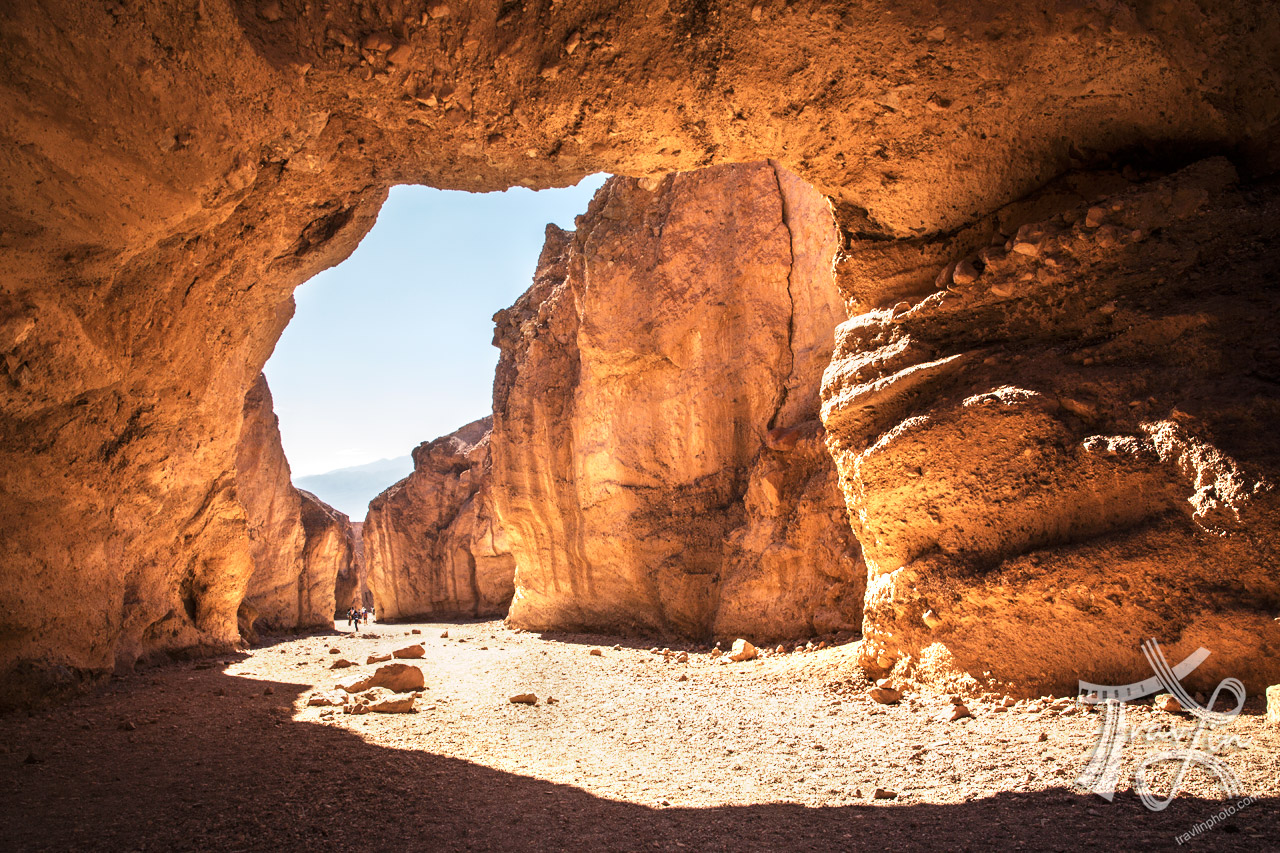 A visit to the Devil’s Golf Course, jagged formations of rock salt on the valley floor. 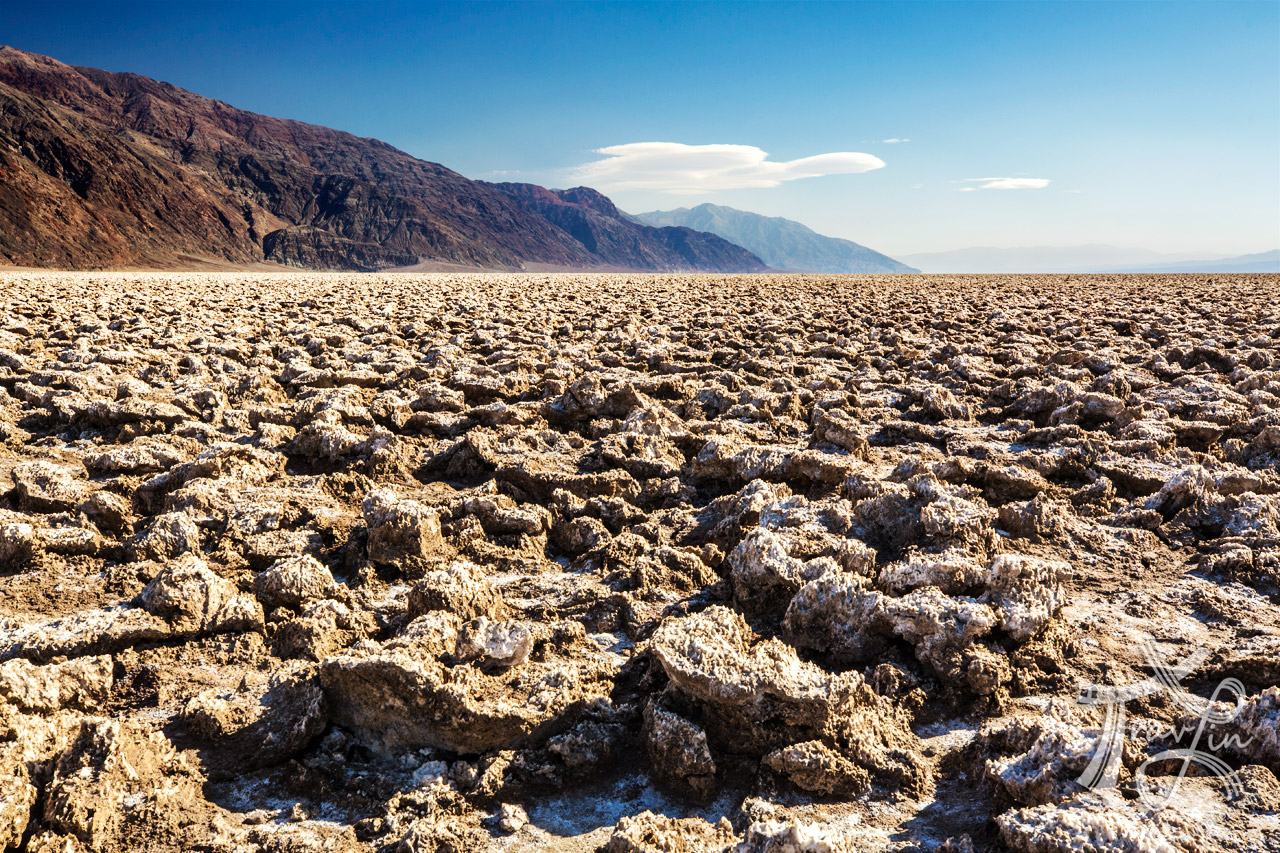 A drive through the Artist’s Palette loop.  By this point it had become incredibly windy and there was a lot of dust flying around everywhere. 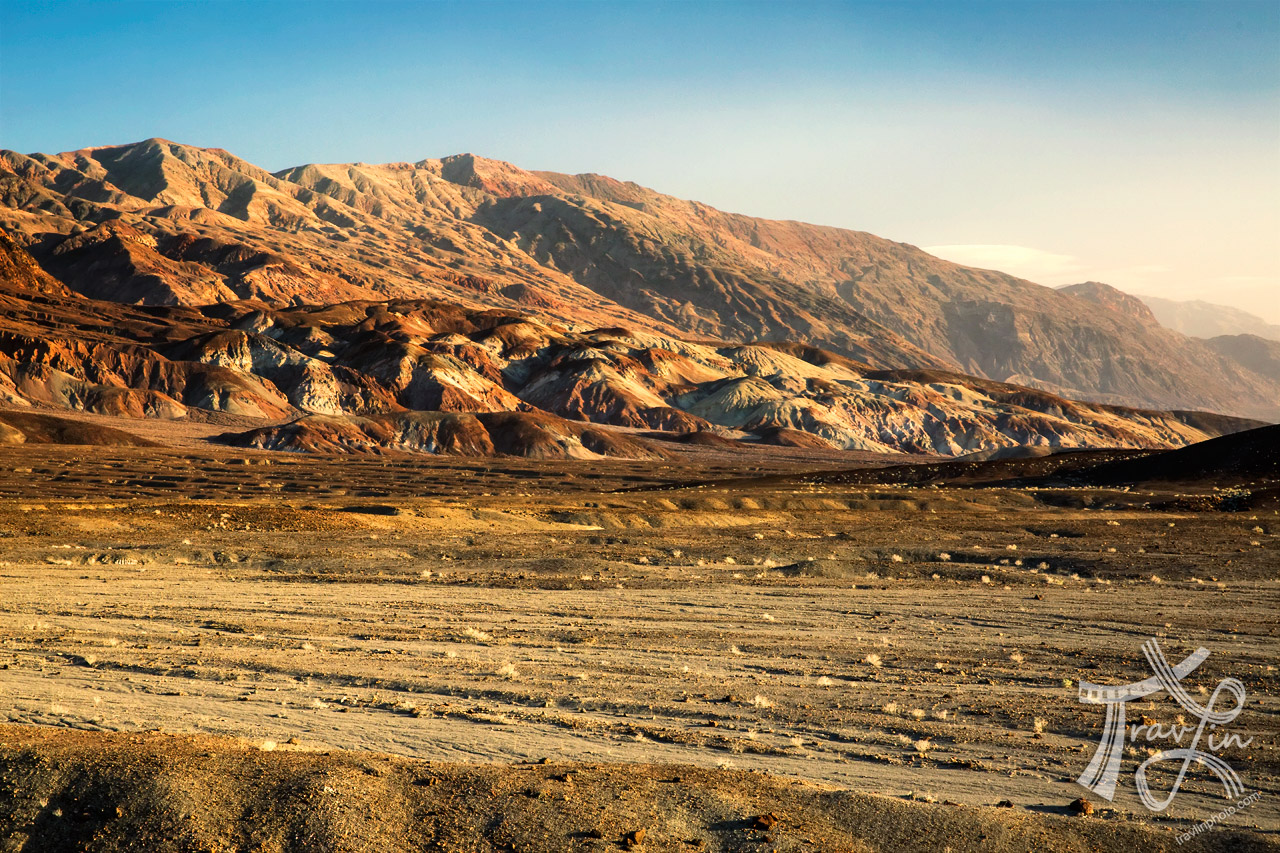 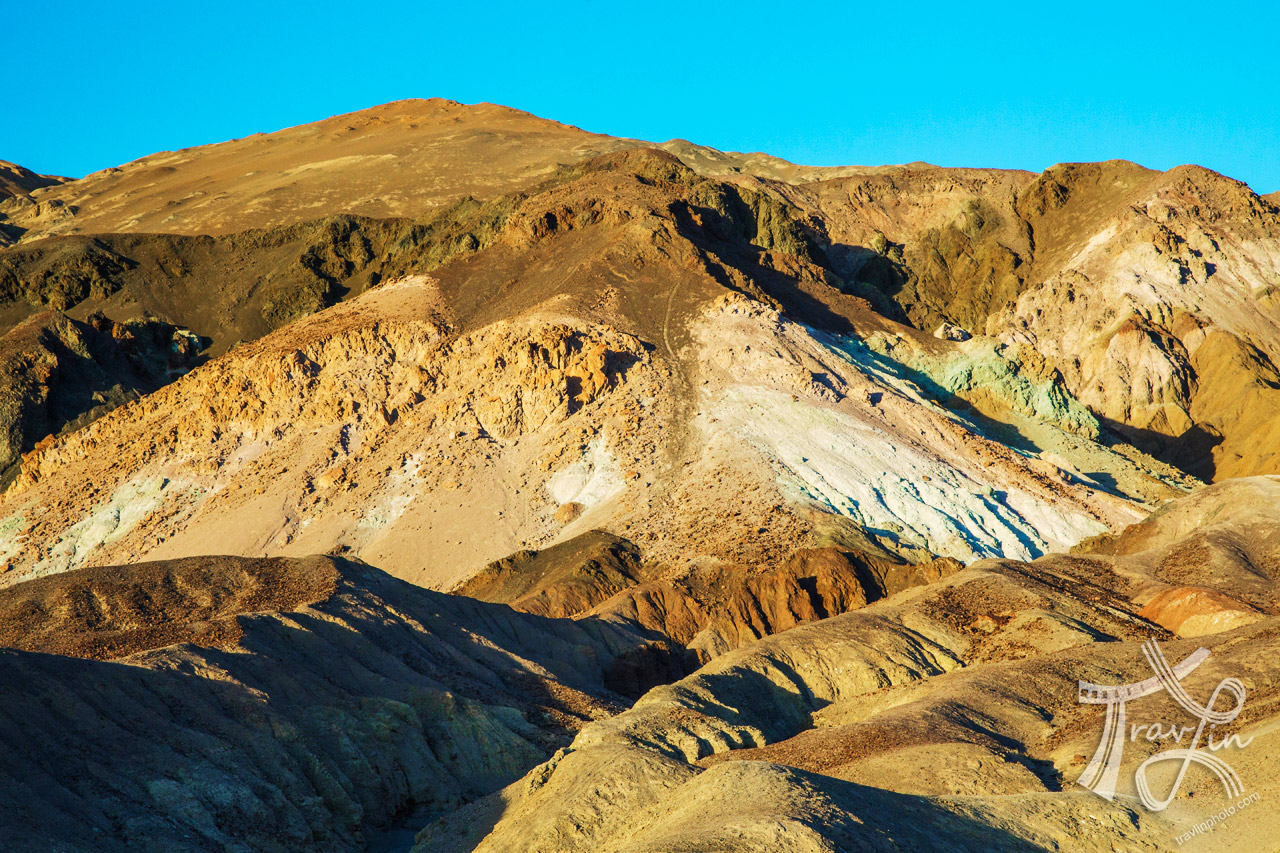 And then we had some baby related drama (no naps!!) so we took a break around the Furnace Creek area to regroup before sunset.  We eventually decided to do a late afternoon loop through Artist’s Palette (again) and then check Zabriski Point on our way out of the park and back to Las Vegas.  Nothing was particularly noteworthy, but all and all our trip to Death Valley was quite nice!  Perhaps next time we’ll visit for more than 30 hours. 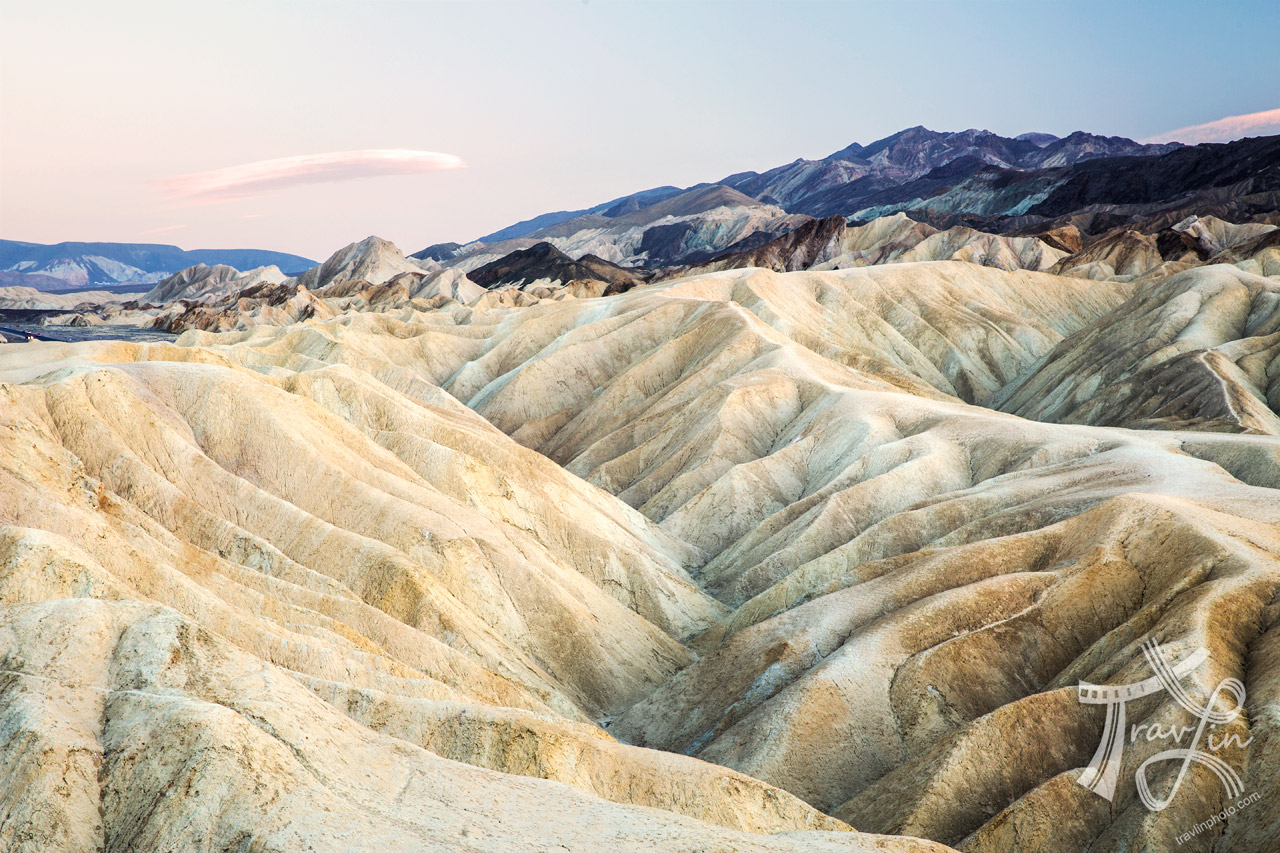 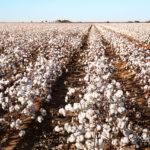 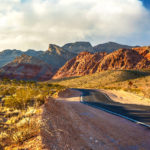